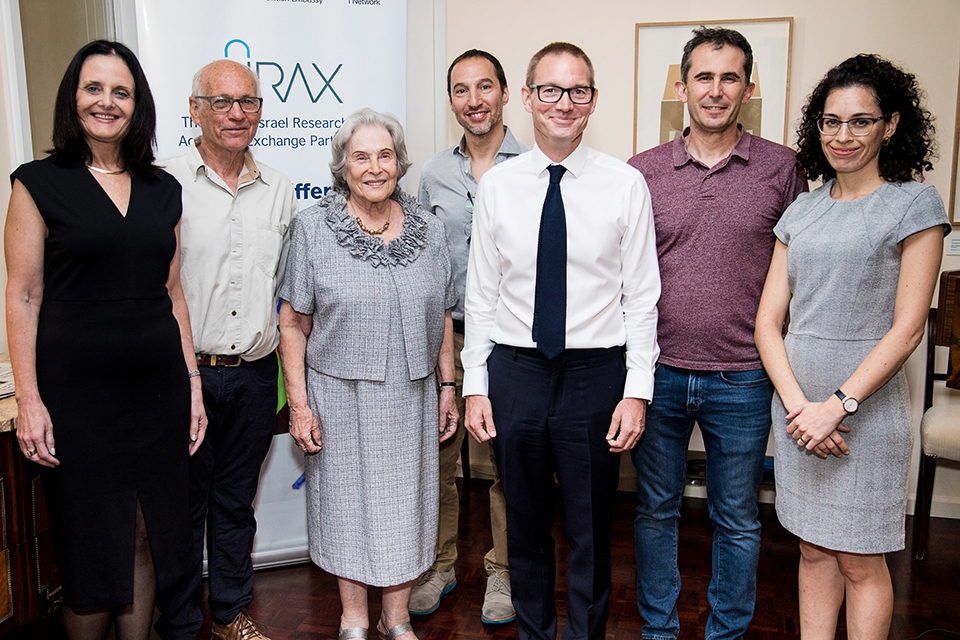 The projects will focus on various aspects of ageing and how it affects diabetes, vascular disease, neuro-degenerative disease such as Multiple Sclerosis, brain imaging, as well as the use of technology for macular disease research

The British Council and the British Embassy, Israel, have given the go-ahead to seven, new, three-year bilateral scientific projects in the field of research on ageing. The work will be carried out by top institutions in the UK and Israel.

The projects will be awarded nearly £2.8 million in total from BIRAX, a £10 million programme to support cutting edge UK-Israeli research.

The projects will focus on various aspects of ageing and how it affects diabetes, vascular disease, neuro-degenerative disease such as Multiple Sclerosis, brain imaging, as well as the use of technology for macular disease research.

I am excited that seven new projects have been selected for the first call of BIRAX Ageing, the latest phase of our flagship science research programme. These cutting-edge research collaborations not only position the UK and Israel at the forefront of ageing research world-wide, but also reaffirm the close connection between British and Israeli academic communities and establishments. Through these meaningful and sustainable collaborations, we can together tackle universal ongoing challenges.

BIRAX Ageing research looks at the global challenges of ageing, bringing together world-class and complementary scientific capabilities to promote healthy ageing. It aims to establish and grow a substantial new academic community and support ground-breaking collaborative research in the field of ageing, funding both research mobility and joint research projects over the next five years. This crucial research will be generously supported by the Pears Foundation, The Israel Ministry of Science and Technology, The Parasol Foundation Trust, Charles Wolfson Charitable Trust, The Rosetrees Trust, Diabetes UK, The British Heart Foundation, and MS Society.

Since its establishment in 2011, the BIRAX Initiative has earned its excellent reputation for successfully nurturing UK–Israel scientific exchange for the advancement of knowledge. We are proud to have been the founding partner of this important initiative, which will have an enduring impact and legacy, and are delighted to be part of a family of committed partners.

BIRAX was initiated 8 years ago by the British Council, British Embassy in Israel and the UK Science and Innovation Network in collaboration with the Pears Foundation as a founding partner. So far, BIRAX has funded 19 research projects tackling some of the world’s most challenging health conditions and diseases by employing pioneering regenerative medicine and stem cell therapies and using the most advanced and cutting-edge technologies. The ground-breaking science has been made possible through the generous support of a broad family of partners and supporters including the Israel Ministry of Science and Technology, the British Heart Foundation, JDRF, MS Society, Parkinson’s UK, Alzheimer’s Society, the Medical Research Council, The Parasol Foundation Trust, The Rosetrees Trust, Weizmann UK, Clore Foundation Israel, Charles Wolfson Charitable Trust, The Wolfson Foundation, The Maurice and Vivienne Wohl Philanthropic Foundation, The Kahn Foundation, UJIA, Celia and Edward Atkin, The Sheila and Denis Cohen Charitable Trust, The Barbara and Stanley Fink Foundation, and The Glycobiology Institute of Oxford University.

The funded projects are:

The overall aim of this research is to understand bone fragility in ageing patients with type 1 diabetes who are currently at high risk of bone fracture and premature death, and to develop new treatments.

The project will explore neurodegenerative processes in age related disease such as dementia by understanding the processes behind “healthy” brain ageing. Owing to dramatic developments in brain imaging methods for providing quantitative measures of brain microstructure, in particular, in Prof Assaf’s lab in Tel Aviv, these methods could be particularly powerful ways to detect subtle changes in brain structure occurring with ageing, providing early indicators of age-related neurodegeneration. No database of microstructural imaging yet exists.

This project aims to create the first database of microstructural imaging and to initiate a brain database in Israel.

This project proposes a novel anti-ageing approach to combat age-associated deterioration of vascular function. The knowledge gained in the project will be leveraged for the development of new anti-aging treatments.

This project aims to investigate the performance of new automated software algorithms to monitor AMD and detect progression, towards implementation in routine patient’s management; and to investigate the potential for machine learning to identify factors and biomarkers associated with long-term AMD treatment response.

£2.8 million awarded to fund projects by British and Israeli scientists