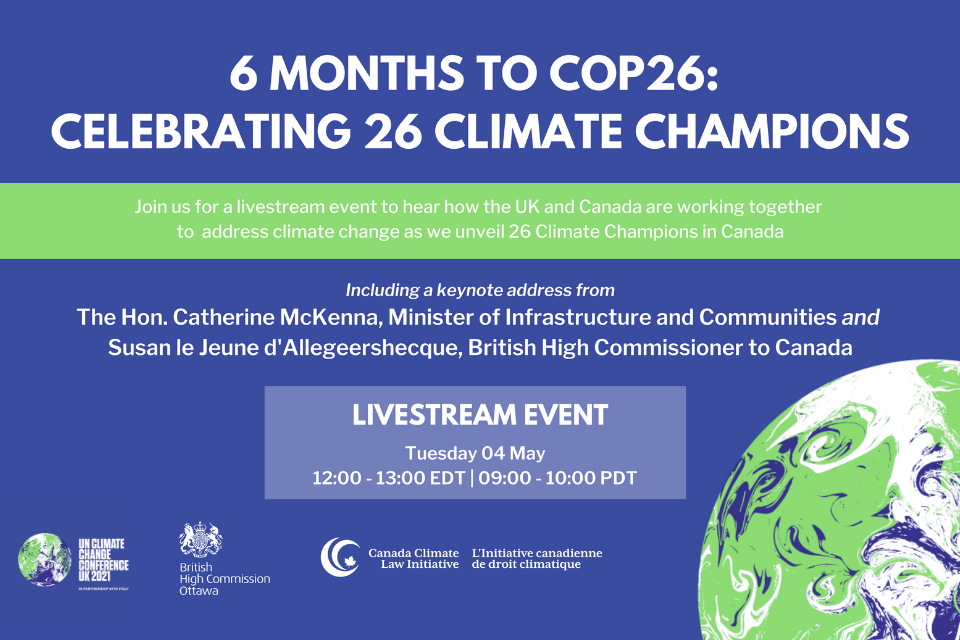 Today the British High Commission and the Canada Climate Law Initiative announced 26 ‘Canadian Climate Champions’. They have been identified as exceptional individuals actively working to move Canada to net-zero emissions.

Among those chosen are current Canadian Minister of Infrastructure and Communities and former Environment Minister, The Honorable Catherine McKenna as well as renowned environmentalist David Suzuki, Co-Founder of the David Suzuki Foundation.

Today’s livestream event marks six months to the UK hosted COP26 Climate Change Conference due to take place in Glasgow. The 26 Canadian Climate Champions identified are working in many different sectors and industries across the country, coming from many different generations and lived experiences, all with a common goal to lower carbon emissions and drive forward a clean energy future. They offer a snapshot of the growing number of Canadians, and people around the world, working to help protect our planet.

Canadian Climate Champion, Minister McKenna, alongside British High Commissioner, Susan le Jeune d’Allegeershecque, delivered the event’s keynote address. Minister McKenna was chosen for her work in expanding parks and protected areas across Canada. In her former role as Canada’s Environment Minister, she helped negotiate the Paris Climate Agreement, negotiated Canada’s first comprehensive climate plan with a national price on pollution, and reduced plastics in our oceans. She has also been an ardent promoter of innovation and investments in the clean tech sector.

The event also featured an address from two Climate Champions on the critical need to act urgently on climate change, including David Suzuki. Dr. David Suzuki has been a lifelong environmental activist and is well known for his television series ‘The Nature of Things’ on CBC which has educated millions of Canadians on the importance of the natural world and conservation. He has written and co-authored 54 books (18 for children) and has received numerous awards, including a UNESCO prize for science and the Companion of the Order of Canada. David Suzuki was followed by Melina Laboucan-Massimo, Founder of Sacred Earth Solar and Just Transition Director of Indigenous Climate Action, who has been working on social, environmental and climate justice issues for the past 20 years.

Today’s event is an opportunity to celebrate those leading efforts towards net-zero carbon emissions. It also highlights Canada and the UK’s shared commitment and dedication to addressing climate change and holding global temperature increase to 1.5 degrees.

The UK and Canada are proud to celebrate the many exceptional individuals that work tirelessly towards achieving net-zero. Today’s event recognises the critical work of these 26 Climate Champions as we all turn our attention to COP26 and the next steps in our global efforts to tackle climate change.

Meeting the challenge of anthropogenic climate change must transcend political partisanship and economic barriers and we have very little time.

We are at a turning point for our planet and urgent change is needed now to address the existential threat of climate change. Ahead of COP26, the UK is leading by example through ambitious climate action. We are also working with partners around the world, including in our collaboration with Canada, to drive climate action forward. Because climate change won’t be addressed by one country alone, but through the collective work of many. It is in this spirit that we recognise these 26 Canadian Climate Champions, who are helping to move Canada to net-zero emissions and actively working to build a clean energy future for all.

Dr. Janis Sarra, Principal Co-Investigator at the Canada Climate Law Initiative and Professor of law at the Peter A. Allard School of Law:

Canadian courts have now recognized that climate change poses an existential threat to humanity, and globally, we are now facing tipping-points that will have irreversible effects. Canada must begin to lead by example in an ambitious shift toward net-zero emissions, a circular economy, sustainable finance, and protection of biodiversity. The Canada Climate Law Initiative celebrates the Champions that are working towards meeting those goals in a fair and equitable manner, in full partnership with Indigenous Peoples, businesses, and communities across the country.

See attached word document for more information about the Climate Champions, including a short biography and their vision for COP26 and how Canada can reach net zero.

The UK will host the 26th UN Climate Change Conference of the Parties (COP26) in Glasgow on 1 – 12 November, 2021. The COP26 summit will bring parties together to accelerate action towards the goals of the Paris Agreement and the UN Framework Convention on Climate Change. The UK is committed to working with all countries and joining forces with civil society, companies and people on the frontline of climate change to inspire climate action ahead of COP26. To learn more visit https://ukcop26.org/

About the British High Commission Ottawa

The British High Commission in Ottawa, is the UK government’s main diplomatic mission in Canada. Along with Consulates-General in Montreal, Toronto, Calgary and Vancouver, we work closely with the Canadian government and partners across the country to develop and maintain a wide range of substantive partnerships of real value to both countries. These partnerships cover business, defense, climate change, science and innovation, education, and culture.

About the Canada Climate Law Initiative

The Canada Climate Law Initiative (CCLI) is a cross-disciplinary research initiative that advances the understanding of climate governance across Canada through research, dialogue and knowledge sharing. CCLI conducts rigorous legal analysis and consult with a national network of 66 Canadian Climate Governance Experts to bring up-to-date governance knowledge and tools to corporate and pension boards across Canada. CCLI is led by three principal investigators, Dr. Janis Sarra and Dr. Carol Liao from the Peter A. Allard School of Law, University of British Columbia, and Professor Cynthia Williams from the Osgoode Hall Law School, York University.