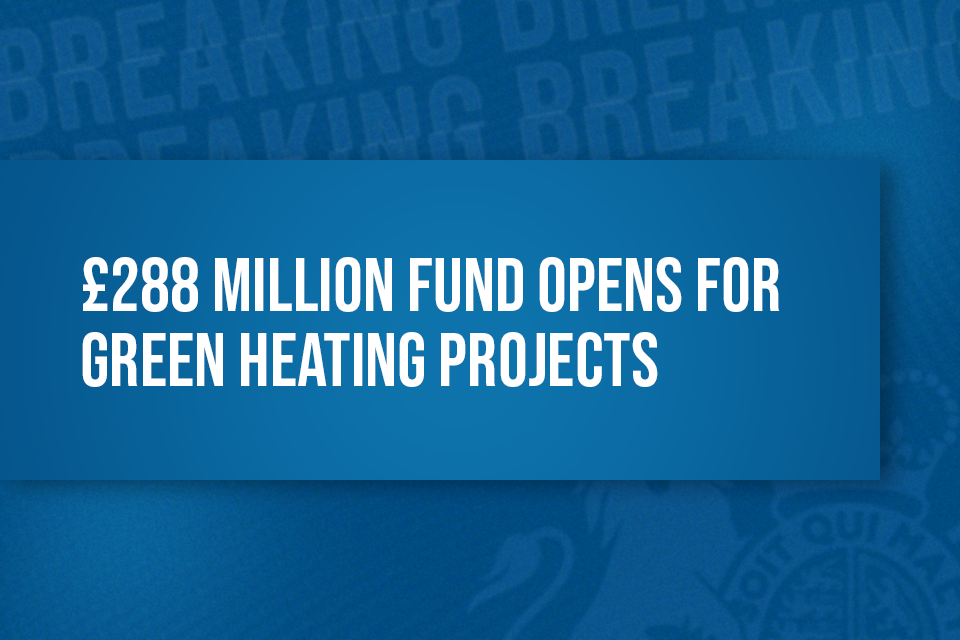 Households and businesses across England are set to benefit from greener heating as a £288 million government funding scheme is opened – boosting the roll out of next generation heat network projects as part of cutting emissions.

Schemes that will deliver clean heating to homes, offices, commercial and public buildings will be able to apply for grants to the Green Heat Network Fund over the next 3 years, allowing more towns and cities across England to take up this tried and tested technology.

The fund is expected to reduce carbon emissions equivalent to taking 5.6 million cars off the road for a year.

Heat networks offer carbon emissions savings by supplying heat to buildings from a central source, avoiding the need for households and workplaces to rely on individual, energy-intensive heating solutions – such as gas boilers.

Funding will support the uptake of low-carbon technologies like heat pumps, solar and geothermal energy as a central heating source. Applications for grants can be made from 14 March.

Heating in buildings forms a significant part of the UK’s carbon footprint, so changing how we warm our homes and workspaces is vital to meeting our world-leading climate change commitments.

Heat networks are an effective way of reducing carbon emissions and this fund will enable us to accelerate the roll-out of these cutting-edge and green technologies.

The scheme is also expected to fund the delivery of an estimated 9.7 million tonnes of total carbon savings by 2050 with the independent Committee on Climate Change estimating that, with continued support, heat networks could meet nearly 20% of overall UK demand for heating by 2050.

CEO of the Association for Decentralised Energy Lily Frencham said:

We’re delighted that the government is invigorating the transition to zero-carbon heating across the UK that uses good old-fashioned pipes and water to transport heat from green energy centres to homes and businesses.

Heat networks offer the most cost-effective tried and tested way of decarbonising our towns and cities and it is great to see government’s continued support for the sector through the launch of the Green Heat Network Fund.

Heat networks have a critical role to play in the UK’s net zero future – and 2022 will be a crucial year for the heat networks sector.

The UKDEA is excited to see the launch of the Green Heat Network Fund as another significant measure to help support the growth of the heat network sector.

The Green Heat Network Fund is the successor scheme to the government’s Heat Networks Investment Project (HNIP), which has provided more than £250 million of funding for schemes across England and Wales since 2018.

More than 20 heat network projects have received HNIP funding, including 2 innovative schemes in the North-East of England, which source their heat from water in abandoned mine shafts and a community-led project in Cambridgeshire, which could be a model for other rural communities seeking to decarbonise their heating.

The Green Heat Network Fund (GHNF) will be open to public, private and third sector applicants in England. It will open for applications on 14 March 2022 and is anticipated to run to 2025.

At present, there are over 14,000 heat networks in the UK, providing heating and hot water to around 480,000 consumers.

The GHNF will be a key part of plans to reduce carbon emissions from heating homes and businesses by 2050 as it succeeds the Heat Networks Investment Project scheme when it closes in March 2022.

Anyone wishing for further information on the GHNF can contact the GHNF team via their mailbox: ghnfcorrespondence@beis.gov.uk.

The Heat Networks Investment Project has focused on accelerating the growth of the heat network market and has permitted fossil fuel sources of heat provided they offer carbon reductions and will be replaced by low-carbon alternatives over time.

The UK government has appointed Ofgem as the heat networks regulator for Great Britain to ensure consumers receive a fair price and reliable supply of heat.

Climate Change Water is the most important thing there is
0
✖