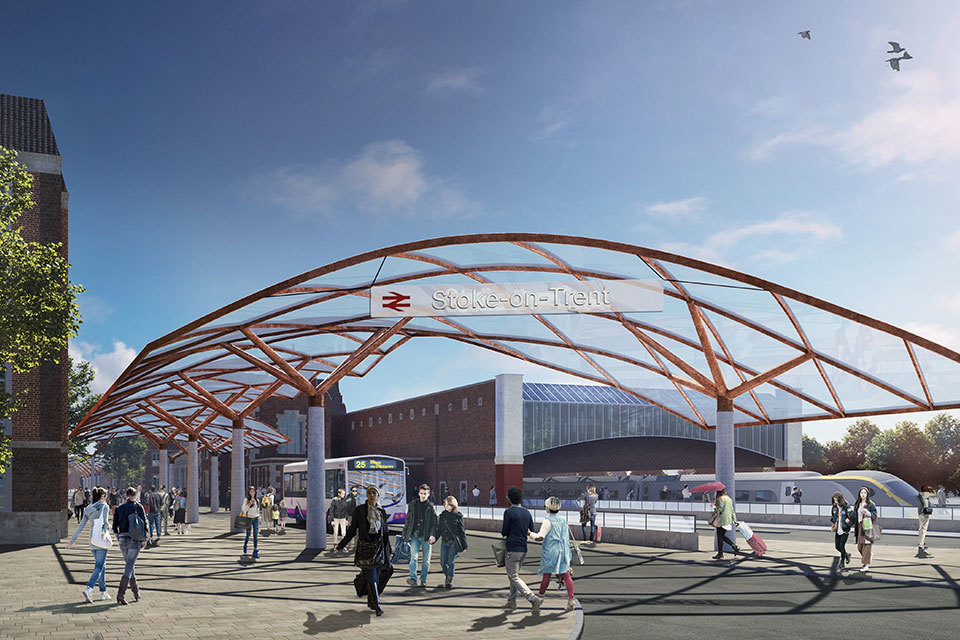 Stoke-on-Trent is set to benefit from £29 million from the government’s Transforming Cities Fund, helping to revolutionise the city’s transport network and how residents get around, Transport Secretary Grant Shapps has today (2 December 2020) announced.

Plans for the funding include a dramatic revamp of the area around Stoke-on-Trent train station, where a brand-new transport hub is to be created that will offer local commuters and visitors to the city better access to taxis, buses and cycling, while also improving walking routes to and from the station.

Further works are planned at Longton train station, with the installation of lifts, facilities to support cyclists and new passenger-waiting shelters. The improvements will improve accessibility to the station, encouraging more people to make use of the station and its links into the city.

Bus passengers will also benefit from today’s funding, enjoying priority routes across the city for the first time as part of plans to cut congestion and bus journey times on the city’s roads. Funding from the £29 million pot is being used to upgrade the city centre bus station, to accommodate these new travel routes.

The Transforming Cities Fund allows cities across the UK to better connect their communities and open up access to jobs, housing and services, and this multi-million-pound investment will make it quicker and easier to get around Stoke-on-Trent, providing a real improvement to the everyday lives of residents.

This government is committed to levelling up transport infrastructure around the country. Today’s funding announcement demonstrates this commitment, boosting the local economy whilst helping Stoke-on-Trent build back better from COVID-19.

This announcement is great news and a real game-changer for transport and connectivity in the city. The investment is coming at a critical time as we emerge from the coronavirus pandemic and power up Stoke-on-Trent for years to come, and it will give the city a real shot in the arm. It’s very encouraging that the government are supporting what we are trying to achieve in the city and it’s a real endorsement for the future of Stoke-on-Trent at a national level that we have been given this money.

A lot of hard work has gone on behind the scenes to make this bid a success and I’d like to thank everyone involved. However, the hard work really starts now as we aim to deliver the scheme in the timescales set by government.

In a bid to cut emissions and improve air quality in the region, a portion of the fund is going towards ‘active travel’ schemes. High-quality walking and cycling routes will be implemented towards Etruria Valley and Trentham Lakes, and a new cycling and pedestrian link will be installed at Vernon Road – offering residents access to higher-quality green travel options.

The Transforming Cities Fund was set up to build on transport links within city regions, promoting local growth and placing cities at the heart of the government’s industrial strategy. Today’s announcement follows the Department for Transport committing £18.5 million earlier this year to the Etruria Valley Link Road. Construction work has now started on this important route, which is designed to reduce congestion into the city centre, boosting the local economy and providing greater access to jobs.

Transport Guidance if you are visiting your local coastline …
0
✖