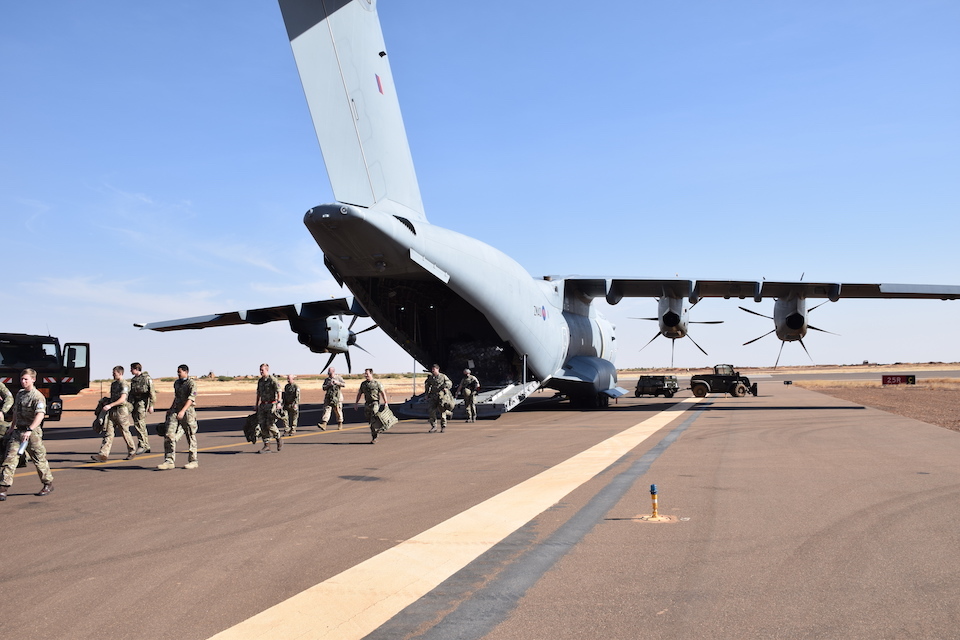 300 UK troops have arrived in Mali as part of the UN’s peacekeeping mission, primarily drawn from the Light Dragoons alongside the Royal Anglian Regiment and supported by specialist trades from across the Armed Forces.

The UK Task Force will provide a highly specialised reconnaissance capability, conducting patrols to gather intelligence and engage with the local population to help the UN respond to threats from violent extremism, and weak governance.

The UN Mission in Mali is made up of over 14,000 peacekeepers from 56 different countries and works to support peace efforts, encourage security sector reform, protect civilians and promote human rights.

As a permanent member of the UN Security Council this deployment is a demonstration of our firm commitment to peacekeeping and the importance we place on improving security in the Sahel by protecting local communities.

Our land forces are the best in the world, and we are one of a small handful of nations able to provide this specialist capability in a challenging environment which will help prevent the spread of conflict across the region.

The main body of troops arrived on 2nd December, and all UK personnel will have arrived by 8th December to set up the UK Headquarters. They have flown from RAF Brize Norton by A400M aircraft to the UN camp in Gao. They will be based in the newly formed Camp Bagnold, which is named after Brigadier Ralph Alger Bagnold, the desert explorer and first Commanding Officer of the British Army’s “Long Range Desert Group.”

The 300 strong Light Dragoon task group is joining over 14,000 peacekeepers from 56 Nations as part of this challenging UN mission in Mali to help protect the people from violence and support political dialogue. We bring years of experience on operations, first class equipment and exceptional people.

We’ve trained hard for the last year to make sure that we are ready for this challenging mission. We’re proud to be the first British soldiers to join in this team effort to help combat instability in the Sahel.

The Sahel is one of Africa’s poorest and most fragile regions. It is marked by chronic poverty, instability, high levels of gender inequality, and is highly vulnerable to the effects of climate change. Terrorist violence and conflict is sharply on the rise. It is in all our interests that we work together to protect civilians and help build a safer, healthier and more prosperous future for the region.

This new deployment of 300 British troops to the UN Peacekeeping Mission in Mali is part of our ongoing work in the Sahel region to build stability, improve the humanitarian response and help protect innocent civilians from violence.

British troops will reinforce our development and diplomatic work, to maximise our impact on the ground.

The UK is one of the largest humanitarian donors to the Sahel – in 2020 the UK gave £14.65m in humanitarian aid to Mali and is currently in the process of increasing the size of the UK embassy to reinforce our diplomatic strength in the country.

Alongside this, the MoD currently has 3 Chinook helicopters and 100 personnel in a logistics role supporting the French-led Counter-Terrorist mission, Operation BARKHANE. This is entirely separate from the UN mission, but they will be operating in the same region.

International Affairs OSCE Ministerial Council side event on the Moscow …
0
✖