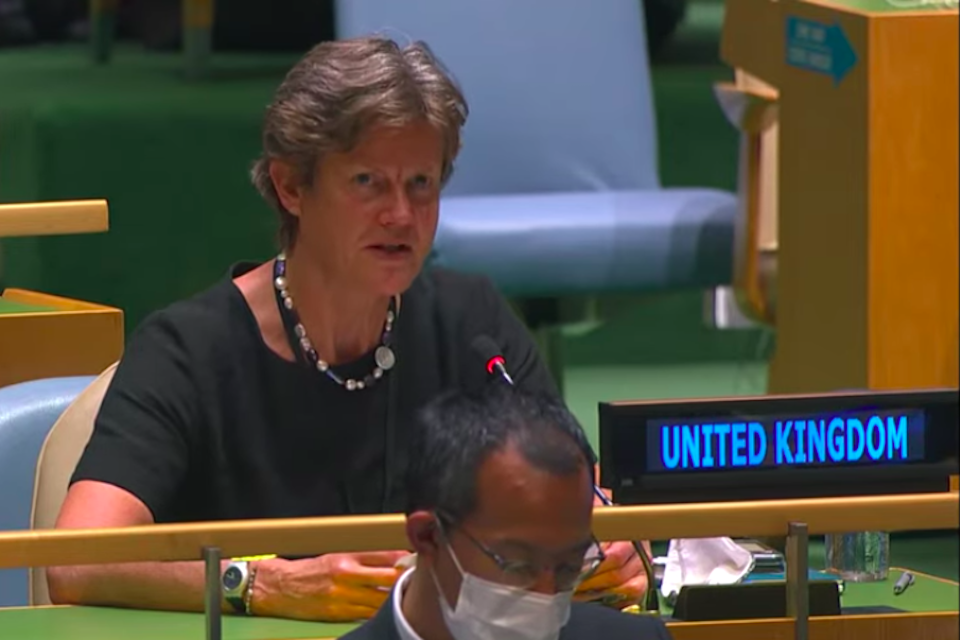 Thank you, Mr President. And I would also like to thank the Special Envoy for her briefing today. We support her ongoing efforts towards a peaceful return to democracy in Myanmar.

The United Kingdom continues to condemn the military coup in Myanmar and to reiterate our call on the military to respect the human rights of the people of Myanmar as well as their democratic wishes.

First, the international community and UN continue to have an important role to play in addressing the crisis in Myanmar. The Security Council has to date issued two robust and unified statements in condemnation of the military’s actions. The adoption of today’s General Assembly resolution sends another clear message to the military that the international community does not accept their actions, and will continue to stand with the people of Myanmar and call for the release of all those arbitrarily detained.

We reiterate our support for ASEAN and the central role they are playing in responding to the crisis. The Five Point Consensus is an important agreement. We support ASEAN attempts to implement it and ensure the crisis is not perpetuated. We call on the Tatmadaw to implement commitments they have made and work constructively with ASEAN.

Secondly, as we heard from the Special Envoy today, what began as a political coup is fast becoming an economic and humanitarian crisis. The UN estimates that 200,000 people have been displaced in border areas since 1 February. With 60% of healthcare facilities not functioning, COVID and other lifesaving vaccinations cannot be administered. The military’s blocking of supply routes and the coup-induced banking crisis are adding to human misery.

Since the coup, the UK has provided $7.5 million in new humanitarian funding for the Red Cross, the UN, and local and international NGOs in Myanmar. We have also reprioritised $3.3 million of humanitarian funding towards urgent needs in Kachin, Rakhine and Karen States. But full, unhindered humanitarian access for UN and other humanitarian agencies, including access to the most vulnerable communities, is vital to address this developing humanitarian catastrophe.

We have not forgotten the plight of the Rohingya. The coup has added to their suffering. And it is vital that displaced and vulnerable communities, whether still in Myanmar or sheltering overseas, including the Rohingya, as well as vulnerable host communities, receive humanitarian assistance.

Finally, it is our view that only action will alter the military’s course. The UK has had an arms embargo in place since 2017, and since February, we have imposed sanctions on the two principal military conglomerates – a key source of revenue for the military – as well as a total of 25 military leaders. We encourage others to consider what measures they can take to support the people of Myanmar on a path back to prosperity, democracy and stability, and to ensure those responsible for human rights violations and breaches of International Humanitarian Law are held to account.

Once again, I thank the Special Envoy for her continued efforts.