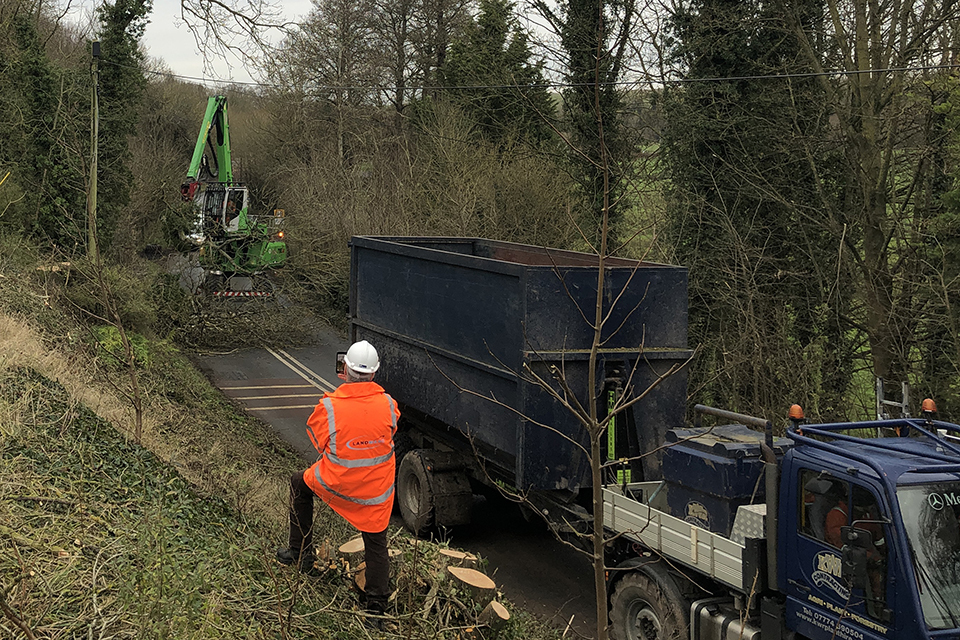 Thousands of ash trees across Salisbury Plain Training Area, as well as many more across the country, are infected with the disease. There is no cure or treatment and over time infected trees will weaken, causing branches to fall and trees to eventually die and collapse.

This presents a significant health and safety risk, especially alongside roads, public rights of way and woodland areas used by military personnel for training and the public for recreation activities.

For the safety of road users and local residents, it was necessary to remove infected trees along the A345. This posed many challenges due to the location and local infrastructure, not least because of the power lines that were tangled up with trees. As a result, following detailed consultation with local authorities and Highways England, a number of temporary road closures and diversions were implemented. These enabled the safe use of specialist machinery to protect onsite workers and the general public.

The process also required 5 power shutdowns to fell the trees that were wrapped around the power lines. This protected the local power network from disruption if ash dieback had caused a branch or tree to bring a power line down. Throughout the work, public transport continued as bus services were still able to operate.

The early completion of the felling along the A345 means reduced disruption for local people and a lower cost to the taxpayer. About 2300 tonnes of wood was removed by the felling team in 45 days. This was slightly more than expected and was sold as biomass chips to be used for energy generation, partially offsetting the cost of the operation.

Further ash dieback felling continues at Heytesbury and more is planned in several areas across Salisbury Plain. Regular inspections will continue and may identify other areas where felling is required.

This is a fantastic example of good planning, communications and collaboration which has enabled the project to finish well ahead of schedule, protecting those that use the estate and the public at large.

I’m really pleased to see how successful it has been and would like to thank the local communities for their patience and forbearance whilst having to deal with the inevitable disruption caused by the road closures.

So far, around 80,000 infected trees have been felled on Salisbury Plain, including on 20 miles of roadside. We now need to focus on the process of replanting and regeneration and have held extensive discussions with the Forestry Commission and Natural England about the restoration of felled areas, which is reflected in the approved felling licences for the operations.

Within the woodland compartments, space has been left for the natural regeneration of tree seed already in the soil and this will be enhanced with the planting of native broadleaved species. A small proportion of felled timber has also been left on site to provide deadwood habitats to help maintain the current ground flora as much as possible.

The removal of ash is a devastating loss to the local landscape, but we are carefully considering which species will be planted so that we can provide a woodland that is more resilient to disease for future generations.

DIO and Landmarc began the programme to fell infected trees across Salisbury Plain Training Area in early 2020 at Ashdown Copse near Tidworth.

Queries regarding the felling process on Salisbury Plain Training Area should be directed to nsc@landmarc.mod.uk or 0800 022 3334.

A345 ash dieback tree felling completed ahead of schedule