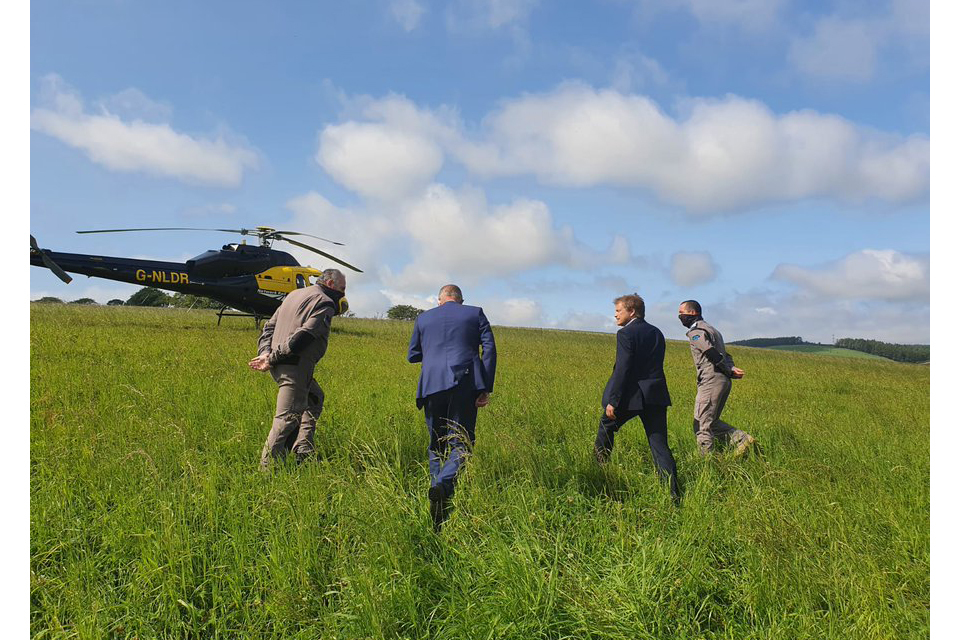 Network Rail’s interim report on the Stonehaven tragedy, commissioned by the Transport Secretary Grant Shapps immediately after the event, has been published today (10 September 2020), setting out immediate and long-term action to improve the railway’s resilience to extreme weather events, following the derailment of a passenger train in Aberdeenshire.

While the report in no way pre-empts the outcome of formal independent investigations being carried out by the Rail Accident Investigation Branch, or those by the Office of Rail and Road, British Transport Police and Police Scotland into the tragedy on Wednesday 12 August, the initial findings suggest that, after a period of heavy rainfall, the train struck a pile of washed-out rock and gravel before derailing.

The interim report assesses the current controls and management of thousands of miles of earthworks – the sloped ground beside railway tracks – and sets out how the industry plans to reduce the risk of landslips on the network in the future.

The report highlights the need for an increased focus on deploying technology across the network to predict failures and investment in better forecasting to enable local decisions for imminent weather events. Network Rail’s extensive research and development portfolio is helping to accelerate the development and deployment of this technology.

Key findings also suggest that industry rules for reporting and responding to adverse rainfall will be improved and strengthened, helping signallers better manage services during bad weather. Other plans include discussions with meteorologists to understand how real-time information can be better used to inform train operations about unpredictable extreme weather.

Hundreds of sites across the country have been inspected over the last 3 weeks by engineers and specialist contractors and supplemented by helicopter surveys to identify any significant issues requiring emergency intervention.

It follows the launch of 2 independent task forces, which will be led by distinguished experts in their field – Lord Mair and Dame Julia Slingo – to help Network Rail better manage its vast number of cuttings and embankments, and its response to severe weather events.

The incident at Stonehaven was a tragedy, and my heart goes out to the friends and family of driver Brett McCullough, conductor Donald Dinnie, and Christopher Stuchbury.

We owe it to those who lost their lives, were injured, and were affected by this incident to learn and act on every possible lesson to ensure this is never repeated. The independent investigation will enable us to understand exactly what went wrong and make sure it does not happen again.

We cannot delay learning the lessons. That is why I immediately commissioned this report and am making the interim findings available. I welcome the work setting out the challenges in adapting our rail infrastructure to cope with increasing extreme weather events caused by climate change. The task is now to overcome those challenges.

We will use the findings of this interim report to improve, shape and accelerate our work to build a more robust and resilient rail network so that our railway continues to be one of the safest in the world.

The Secretary of State is also writing to the Chief Constable of Police Scotland, Iain Thomas Livingstone, recommending that PC Liam Mercer, one of the first people on the scene following the derailment, is commended for his bravery.

My thoughts remain with the families and friends of the 3 people who lost their lives, those who were injured and everybody affected by the tragedy at Stonehaven last month. We owe it to them, and all our passengers, to make sure we understand what happened and what more we should be doing to reduce the risk of it ever happening again.

We are all aware that we are increasingly seeing more incidents of severe weather and, as the report published today shows, earthworks and drainage infrastructure – some of which are more than 150 years old – prove to be a real challenge as the country experiences more heavy rainfall and flooding.

Our railway is one of the safest in Europe and tragic accidents are incredibly rare, but something went wrong on 12 August near Stonehaven and it is a stark reminder that we must never take safety for granted. We are improving and accelerating our resilience work and will do everything we can to minimise the impact of weather on the safety and reliability of the railway as our climate continues to change.

Network Rail has developed industry-leading techniques to monitor and manage ageing cuttings and embankments deemed high risk, while the government’s Committee on Climate Change recognises its resilience planning for climate change adaptation as well advanced. However, with the impact of severe weather events experienced in recent years, it has become even more important to swiftly implement these plans.

Today’s interim report will be followed by a final report, which will be published in due course. This will provide greater detail on work that can be accelerated to improve the railway’s management of extreme weather and earthworks.

Transport The name of Hull’s new bridge is announced