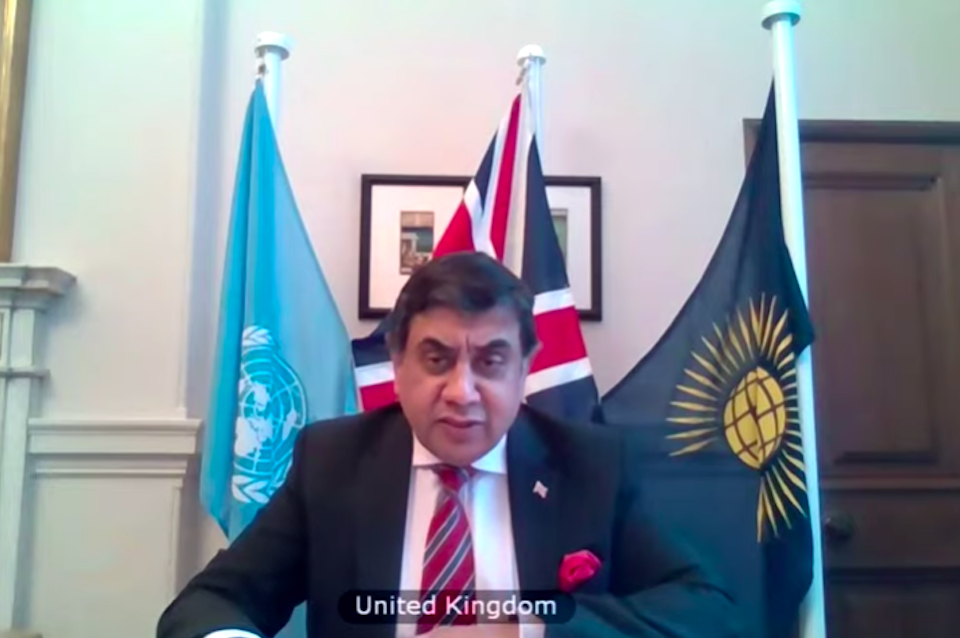 Thank you, Madam President, and thank you also to the Secretary-General. And may I put on record our thanks to both Mr Beasley and Ms Bucher for briefing us so comprehensively.

As we’ve already heard from many colleagues on the Security Council today, it is undoubtedly a tragedy of epic proportions. But here we are in 2021, here we are in the 21st century, that we still need to confront famine and that our tasks – and let us be clear about that – is so much harder by those who pursue division, those who pursue conflict. And we must work together to address this immediate priority.

And that is why, Madam President, the United Kingdom wholeheartedly welcomes the United States’ initiative to bring this vital issue of conflict and food security to the Council today.

The situation is grave. There are no other words for it. Listening to your words, you talked of the raw humanity of the situation, the human suffering unfolding in front of us. I assure you that resonates with us all.

Right now, famine is likely occurring in many parts of the world, but it’s self-evident to us all, in places such as South Sudan. In Yemen, more than 16 million people face a very, very blight future in terms of starvation, likely death in the first half of this year and, as the Secretary-General Guterres has warned us, likely we are on the brink of the worst famine the world has seen in decades.

Many of the countries on this Council’s agenda we know that conflict, as has been said this afternoon, is a primary driver of food insecurity and famine risk. We know that people affected by conflict are less able to source food and less able to buy it.

We also know tragically that armed groups use starvation bluntly as a weapon of war and see humanitarian assistance as fuel for their enemy. They wilfully disregard their obligations under international humanitarian law. They regard humanity as insignificant.

We know that COVID and climate change compound this desperate situation.

So this Council must redouble our efforts to break the cycle of armed conflict, which drives and sustains humanitarian crises around the world. And together, as the United Nations, we must do all we can to use the full range of tools at our disposal to prevent and end conflicts.

UN Security Council Resolution 2417 focuses the Council’s attention on conflict-induced food insecurity in countries both on and off our regular agenda. Many of us, as we’ve heard from colleagues today; many of us, including myself, of the United Kingdom; most recently our Special Envoy on Famine Prevention and Humanitarian Affairs have visited these countries directly. We’ve spoken to people about the brutal realities they face on a daily basis.

Naming a few conflict situations or country situations, in South Sudan, where famine is likely to take root in Western people, 60 percent of the country’s population face severe levels of food insecurity. Fundamentally, the Government of South Sudan must do more to foster peace and stability and to de-escalate subnational conflict. And across the United Nations system, we need to work harder, we need to coordinate better if we are truly to remove the barriers that stop us getting food to those who need it.

In northeast Nigeria, over a decade of conflict has left more than 1.2 million people unable to access basic humanitarian assistance. The horrifying recent attack by armed opposition groups in Dikwa that affected civilians and targeted humanitarian workers is utterly and totally unacceptable. Attacks like these have made the food situation, the humanitarian situation, so much worse, and therefore we need to work together to improve humanitarian access on an urgent basis.

As Mr Beasley highlighted – indeed, Madam President, you yourself mentioned – across Ethiopia, around 18 million people will require humanitarian assistance in this year alone. In Tigray, humanitarian access remains hugely constrained. Four months of violence has resulted in forced displacement, human rights violations, sexual violence allegations and the collapse of essential basic services. The risks of extreme food insecurity are significant. An estimated 4.5 million people, 80 percent of the region’s population, will need emergency aid over the coming months. Urgent action is needed to avert a major catastrophe.

And these are just a few of the many tragic situations currently faced around the world.

Firstly, we need to improve reporting and evidence of food insecurity and famine risk, including on who is blocking humanitarian access and, importantly, how they are blocking. Reporting needs to be swift and timely so that this Council can take action before it is far too late.

Secondly, this Council must act on the reporting it receives. Words are simply not enough. Despite the provisions in Resolution 2417, the Council has failed to encourage any independent state investigation into the use of starvation of civilians as the of warfare.

And finally, and importantly, we also join the voices of those who say that the Council must hold to account those responsible for driving conflict-induced food insecurity, and that includes the use of sanctions against those who restrict humanitarian access.

In conclusion, Madam President, conflict is escalating famine and millions upon millions are suffering. If we are truly to prevent the starvation of more innocent women and men and of course, tragically, children, it is vital that the UN reporting on this situation leads to Council action. We therefore welcome the announcement of the Famine Task Force today to more strongly coordinate the aid effort on famine protection. And we therefore look forward to working together with all of you – our colleagues, our friends, our fellow Council members, and across the UN family of nations – to bring about the actions that can properly respond to the harrowing evidence we have heard today from our expert briefers.

The question often asked is why. Put simply because it matters. Lives literally depend on it. Thank you, Madam President.