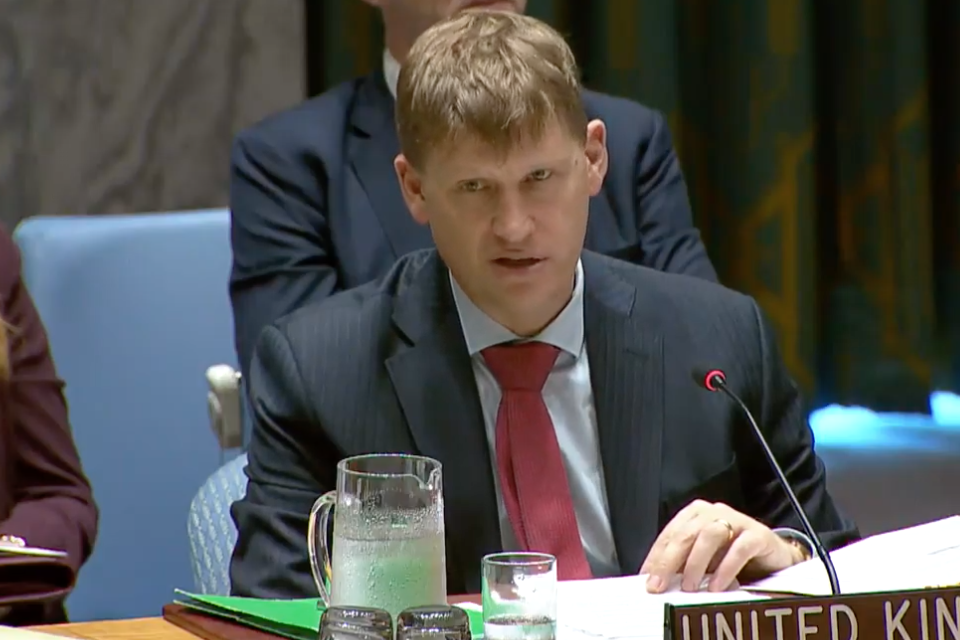 Thank you, Mr President, and let me, like others, thank Special Envoy Xia for your briefing this morning, Sir. We look forward to continuing to work closely with you to support efforts to achieve greater peace, stability and development in the Great Lakes region.

Mr President, the Great Lakes region, historically characterised by internal conflict and tensions between neighbours, is experiencing a new momentum towards regional cooperation on peace and security. And I think it’s important to note and appreciate President Tshisekedi’s efforts to revive the DRC’s diplomatic relations with its neighbours and enhance regional cooperation. The United Kingdom very much welcomes this new momentum – in particular, the signing of a Memorandum of Understanding intended to ease tensions and restore friendly relations between Rwanda and Uganda, facilitated by the Presidents of DRC and Angola. And we also very much welcome the holding of confidence building meetings between regional security and intelligence actors aimed at enhancing efforts to neutralise armed groups in eastern DRC.

Mr President, alongside this positive and welcome diplomatic momentum within the region, the security, human rights, development and economic challenges that persist are immense. In this regard, let me just say that I agree very much with the Ambassador of Equatorial Guinea on the importance of taking a coordinated approach to Ebola, but not just Ebola – to cholera, to measles as well – and, of course, with the Ambassador of France on the importance of properly funding the humanitarian response plan.

Mr President, of particular concern is the situation in and along the borders of eastern DRC, where illegal armed groups continue to commit atrocities against the civilian population and present a major threat to regional security. It is important that President Tshisekedi, has full control of the security forces and that senior figures within the DRC armed forces are not allowed to act independently and foster insecurity.

The problems in eastern DRC and the wider Great Lakes region cannot be resolved solely through military means. As the Secretary-General notes in his report, regional actors must work together to address the underlying drivers of conflict. That will require cooperation and concerted pressure to prevent armed groups from receiving financing and support from within and beyond the region. Armed groups and other security actors control significant flows of resources, including gold, minerals and charcoal, from eastern DRC to neighbouring countries. It is clearly in the interests not only of the countries of the region, but more specifically the peoples of those countries to turn these illicit flows of resources into legitimate trade flows, contributing thereby both the economic development and crucially, for this Council, to stability. And in that regard, I want to say how much we encourage Special Envoy Xia’s efforts to support the establishment of responsible mineral supply chains and promote economic integration in the region.

Mr President, there can be no lasting stability without good governance and the protection and promotion of human rights. Restrictions on political space in Burundi, including harassment of opposition parties and restrictions on media freedom, are deeply concerning. As we look ahead to elections next year in Burundi and the Central African Republic, the United Kingdom calls upon all relevant actors in those countries to ensure that elections are safe and credible, uphold human rights and fundamental freedoms, and properly reflect the aspirations of the populations.

In conclusion, Mr President, the United Kingdom encourages all countries of the Great Lakes region to seize the positive momentum that is emerging and to fully commit themselves to enhancing regional peace, stability and development. And as they do so, the support of the United Kingdom – I think of the entire council – is with them.

Addressing the root causes of conflict in the Great Lakes Region

International Affairs Remarks at the German Embassy by the Chancellor of…