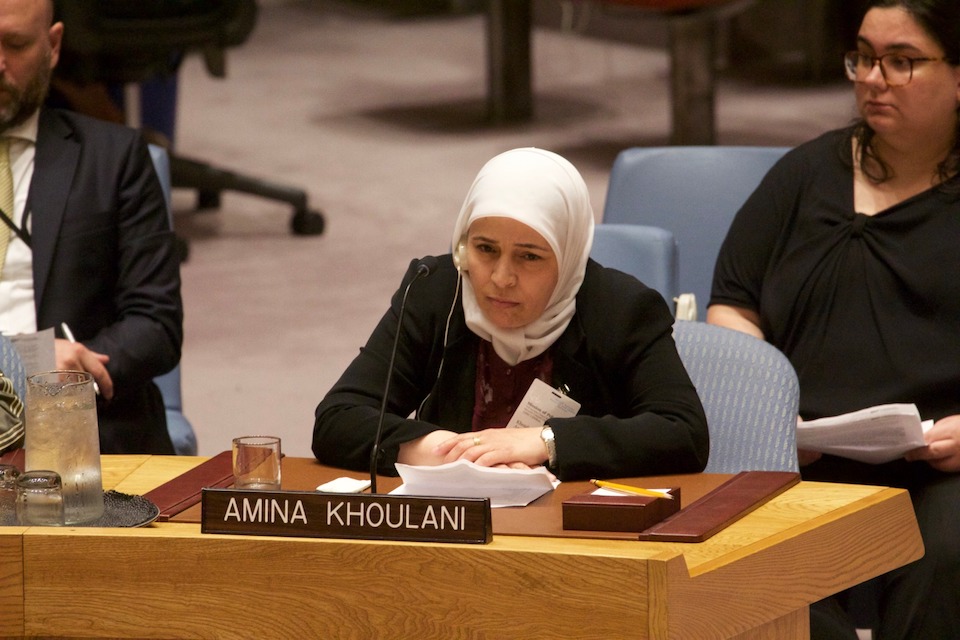 I think we join others in welcoming the fact that this long overdue subject is now being debated in the Security Council. And it is worth recalling that the arbitrary detention of civilians by the Syrian regime is one of the factors that catalysed protests in 2011. And as others have noted, more than eight years later, this repressive practice is still ongoing. Tens of thousands of Syrians have been detained, tortured, subject to sexual violence and killed in detention centres by the regime since the start of the conflict. This is not to underplay, Madam President, what Da’esh has done. We agree there is a very clear need for those who have committed appalling crimes for Da’esh also to be brought to justice. But today’s debate is about government’s persecution of its own people.

This year, after waiting for years, thousands of families were informed that their loved ones had died in the detention centres with no explanation, no accountability. And many more are still waiting to find out if their relatives are alive or dead, which is unbelievably cruel. Other speakers have made reference to Resolution 2474, and in line with that resolution, the families must be informed of what has happened to their loved ones.

So I’d like to echo the call of the US representative today, Madam President, in calling for the release of all those arbitrarily detained. That is quite a dramatic step. It is important. It is important it happens soon. It is an important element of any political process. But I wanted to pick up on the calls from the civil society briefers for an immediate step that the Syrian authorities could do straight away, Madam President. They could agree to give the UN and the Commission of Inquiry access to detention facilities. And they could agree to provide a list of names of all the detainees and their location. Those are easy steps. And I look to the Syrian representative to undertake to transmit these requests to his government. And I would suggest that he lets you, Madam President, on behalf of the Security Council, have an acknowledgement from his government this week that those lists will be provided. And I would like to include access to burial grounds amongst that list.

Madam President, the United Kingdom is the penholder for the Syria Human Rights Council resolution. And we will continue to call for the release of the detainees and for access by independent monitors to detention facilities in the Human Rights Council in Geneva. And I’d like to use this occasion also to pay tribute to the work of the UN Commission of Inquiry, as well as to the brave journalists and NGOs that continue to document the violations and abuses. A number of people have mentioned the importance that the Special Envoy attaches to this issue and we too support all his efforts. And we welcome the continued facilitation by Turkey and Russia of prisoner swaps between regime and opposition armed groups, including those released ahead of the Astana meeting on 1 August. This is not the same though, Madam President, by no means the same as the wholesale release of arbitrarily detained persons that the Council has demanded in various resolutions.

A wider point, if I may: delivering justice for the families of those detained is not only the right moral thing to do, it is also necessary if we are to tackle the drivers and root causes of serious conflict. A credible, substantive and genuine political settlement will need to address the issue of political detainees. And all Syrians, all Syrian citizens, need to be able to live free from fear of arbitrary arrests, torture and execution.

As we have said several times in this Council, Madam President, if Syria cannot resolve the issues that led to the original conflict in 2011, she has no hope of internal rehabilitation and reconstruction and no hope of rehabilitation into the international community of nations.

Addressing the Syrian government’s persecution of its own people