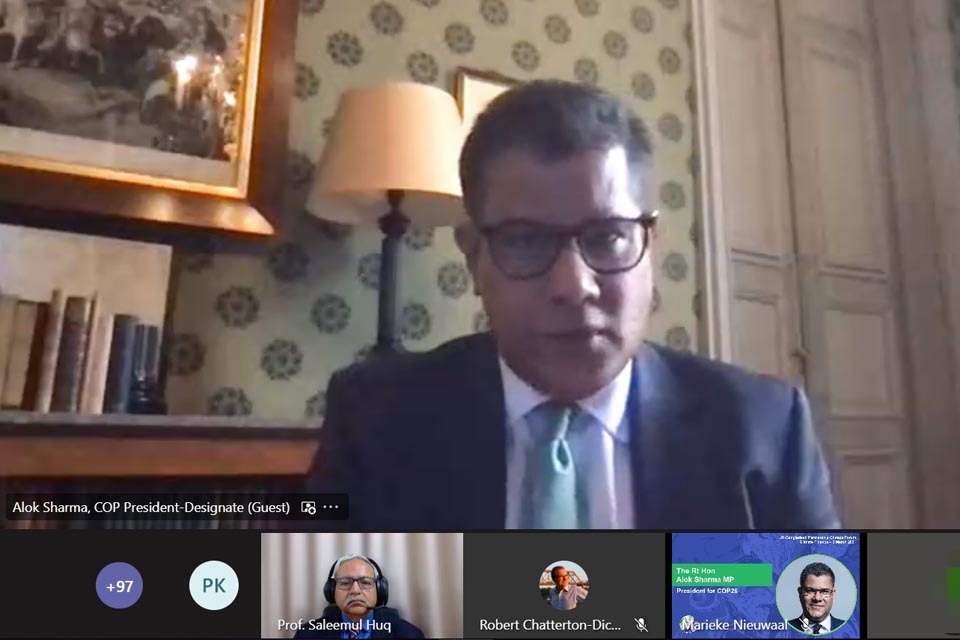 During the last session of the UK-Bangladesh Climate Partnership Forum virtual series, COP26 President Designate Alok Sharma explored how the UK and Bangladesh can work together to tackle climate change by highlighting three critical issues: getting finance flowing; improving the quality of that finance and increasing sums for adaptation; and making finance more accessible. He highlighted practical ways to address those issues and noted that the UK has itself committed £11.6bn for international climate finance (over the next 6 financial years) and is advocating for other donors to make commitments too.

Mr Sharma said he hoped to visit Bangladesh in person as soon as possible, in order to witness first-hand the inspiring work Bangladesh was already doing to tackle the most critical climate challenges of our time.

Honourable Bangladesh Foreign Minister Dr A.K. Abdul Momen, MP attended the virtual dialogue and reaffirmed the commitment of the Government of Bangladesh to build resilience to tackle climate change. He also sought the UK’s cooperation for making finance more accessible to build resilience and amplify climate actions. Apart from financing, the Minister stressed on transfer of technology, expertise and other relevant assistance to mitigate the impact of climate change.

The UK-Bangladesh Climate Partnership Forum virtual series has been chaired by Professor Saleemul Huq, Director of the International Centre for Climate Change and Development (ICCAD), and Simon Maxwell, Senior Research Associate at the Overseas Development Institute (ODI). It is managed by Mott MacDonald in partnership with ODI on behalf of the UK Foreign, Commonwealth and Development Office and the British High Commission in Dhaka.

Launched last November, this virtual series was designed to build on the growing collaboration between the UK and Bangladesh in advancing the climate agenda in the run-up to COP26, the UN’s climate change conference, later in 2021. The virtual series has delved into four key COP26 themes: adaptation and resilience, nature, clean energy, and finance. Over the series, experts and leaders from Bangladesh and the UK have come together to identify innovative ideas, partnerships and initiatives to catalyse climate action.

The session was opened by Judith Herbertson, Bangladesh Development Director at the British High Commission in Dhaka. The event concluded with remarks from Her Excellency Saida Muna Tasneem, Bangladeshi High Commissioner to the UK.

“Climate finance is a central priority for the COP26 Presidency and as hosts we are calling on all donors to increase their finance commitments and play their part in delivering on our shared $100bn goal.

“Events like today’s UK-Bangladesh Climate Partnership Forum serve as important reminders of the challenges faced by many countries of the impact of the climate crisis.

“It is vital that those who can should step up support to help countries reduce emissions and adapt to the rising impacts of climate change.”

“Bangladesh seeks support from UK and other developed countries to ensure concessional finance and access to technology for all developing countries, and LDCs, especially due to the unprecedented socio-economic impacts of COVID-19.

“We need another fund for climate migrants. Each year hundreds and thousands of people are being uprooted from their homes… country governments alone cannot cope with the costs of rehabilitation. Therefore the global leadership could come forward to create another climate migrant fund.”

As one of the countries most vulnerable to the impacts of climate change, Bangladesh has experienced first-hand the devastating impact it can have on people, the environment and the economy. The country has become a global leader on adapting to a changing climate and since 2016 has invested more than $6 billion dollars into adaptation activities.

The UK is already a key partner to Bangladesh on disaster management and resilience building. Since 2008, UK and Bangladesh jointly helped over 27 million people gain access to early warning systems for floods and cyclones, and provided emergency assistance and recovery support after disasters to more than 900,000 people.

Note to the editors