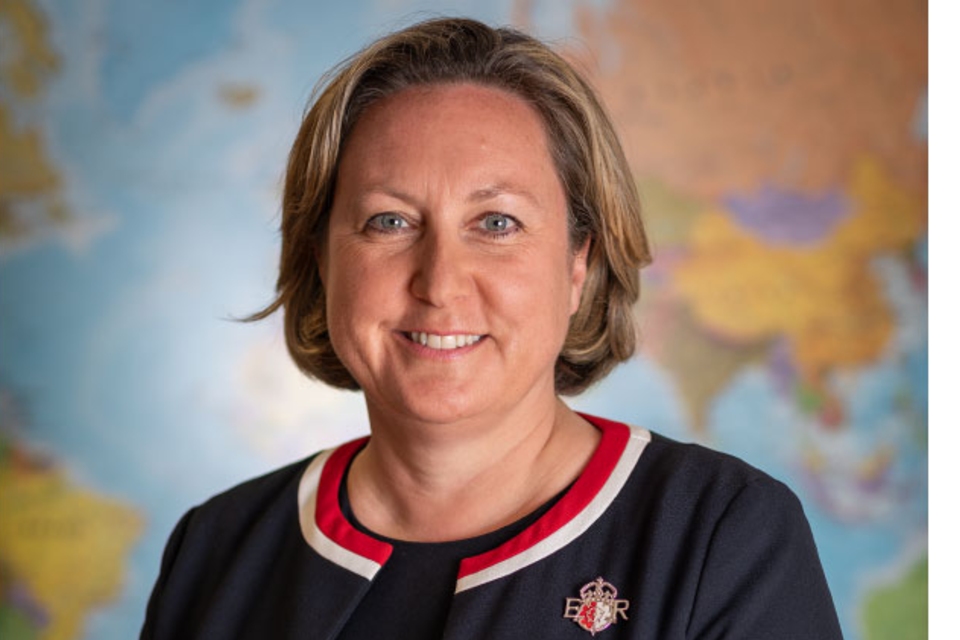 Thank you very much indeed Michael. It’s a real pleasure to be able to speak to you all today, sadly not in person, technology being what we are able to use in order to ensure we keep ourselves and our families safe as we can, because of course the pandemic has shown us some of the challenges it brings but also the importance of diverse, resilient, global trade networks.

Supply chains were created in the Age of Exploration, an important part of our island story and our proud maritime traditions.

The voyages of one of the earliest explorers of the Asia-Pacific from our islands, the famous merchant Ralph Fitch, gets a mention in Shakespeare’s Macbeth.

And of course in 1786, one of Britain’s greatest sailors, the Royal Navy’s Captain James Cook, mapped the Pacific Ocean, yielding vital new trade routes and safe harbours for international shipping.

But Cook himself came to a sticky end while trying to kidnap the King of Hawaii – a story in itself – but his goat managed to retire back to Britain – and indeed on a government pension.

I am hopeful that those perilous endeavours are unlikely to be repeated, as I’m sure the Treasury hopes too!

It is perhaps though to that buccaneering spirit and entrepreneurism of explorers like Ralph Fitch and Captain Cook that we now look as an independent, sovereign, free trading nation once again, realising untapped trading opportunities with fast growing economies and partners around the world.

As we made clear in our Integrated Review published last year – the largest such review of the government’s vision for Britain’s future since the Cold War – we know that the Indo Pacific region is absolutely vital to that future.

It’s home to some to some of the world’s fastest growing economies, and it’s critical to Global Britain’s strategic, economic, and security interests.

The centre of economic gravity is moving East.

By 2030, ASEAN’s digital economy alone is projected to hit a colossal $1 trillion.
And 65 percent of the world’s middle-class consumers are expected to be in Asia.
This will drive global demand for precisely the type of high-quality goods and services in which the UK excels.

So, as we emerge from the economic shock of the pandemic, we are seizing this pivotal moment with both hands.

Next year will be a five-star year for the UK’s trade agenda, as we look to begin formal negotiations on deals with Canada, with Mexico, the Gulf Cooperation Council and India. In particular of course, a big focus will be our plans to join the Comprehensive and Progressive Agreement for Trans-Pacific Partnership, the CPTPP, a huge free trade area with a combined GDP of £8.4 trillion, including the Pacific region’s most dynamic economies.

And early next year I hope to visit several CPTPP members, including Japan and Singapore, to take those discussions forward.

Our ambition is to reach bilateral and multilateral deals with countries whose trade was worth more than £140 billion last year.

This is a really ambitious goal that will put Global Britain in pole position to pursue new opportunities, one which the Prime Minister and I are excited and determined about.
We know that a revolution in e-commerce also means that transfers of services are becoming ever more important components of the international trading system.
An engineer’s report, a 3D printer design, or advance in machine learning can be just as valuable as the contents of a cargo container.

In this new era of digital trade, the potential for UK firms in the advanced, tech savvy and rapidly expanding markets in Asia is truly extraordinary. So, leveraging the UK’s unique strengths as the world’s second largest services exporter – and fifth biggest exporter of digital tech services – we have a unique opportunity to get ahead of the curve.

That’s why as Michael mentioned on Thursday, I was delighted to reach an Agreement in Principle on a digital trade agreement with Singapore – a gateway to the wider Indo-Pacific region.

The world’s most comprehensive, and indeed the first of its kind.

It reforms the slashing of red tape and makes trade cheaper, faster, and indeed more secure. A great example of what two outward looking, free trading nations can accomplish together, which we intend to build on in the Indo-Pacific region and beyond.
We have already become a Dialogue Partner of ASEAN, and we have secured FTAs in the region including Japan, Korea, and Vietnam.

We have reached Agreements in Principle with Australia and New Zealand, deals that are going to create new opportunities for exporters, and better choice and value for consumers.

So now, in close collaboration with brilliant British businesses, we are opening up access to markets across Asia.

Led by Her Majesty’s fantastic Trade Commissioners: Simon Penney in the Middle East; John Edwards in China; Natalie Black in Asia, and Alan Gemmell in South Asia.
From UK cosmetics being able to sell to the fast-growing markets of Indonesia and China, British poultry being served on Japanese tables thanks to our ground-breaking FTA, to British apples being exported to India for the first time.

We are also identifying new opportunities through Trade Dialogues, and taking our relationships further with Enhanced Trade Partnerships.

These are perhaps less likely to hit the headlines than FTAs, but they have the potential to make a real difference to British business.

The trade partnership the Prime Minister announced in May has the ambition to double our bilateral trade by 2030 – already £24 billion before the pandemic struck.
An FTA could strengthen this further by unlocking opportunities in areas where UK firms are second to none.

And circumstances permitting, I hope to commence talks on such an agreement during a visit to India early next year.

Our ambitions in the Indo-Pacific go far beyond the economic, of course. The region is also critical to our security and global ambition to support open societies.

So, as we look to seize the moment of opportunity to reshape our relationships on the world stage as Global Britain, it is to our like-minded friends and allies in the Asia Pacific that we look.

And using our influence to shape international trade to reflect our core values, including freedom, fairness, sovereignty, the rule of law, and good environmentalist policies.
The UK believes in open markets and fair competition where all countries are treated fairly in the global system and businesses can compete based on merit.

And in growing, dynamic democracies throughout Asia, we see like-minded countries who share that outlook.

OECD analysis has estimated that substantial liberalisation of market access barriers by the G20 countries alone could boost UK exports by around £75 billion a year.

A truly colossal sum that would mean growth, jobs and prosperity right across the UK.
So, together, the UK intends to work with our Asian friends and partners to ensure nations play by the rules, to tackle the increasing, systematic use of market distorting practices, such as harmful industrial subsidies, unfair practices by state-owned enterprises and forced technology transfer.

We want to help create modern, fit-for-purpose WTO rules accounting for the seismic shifts in the global economy which have occurred in the more than 25 years since the Uruguay round.

We must ensure that the economic constraints of Covid do not become the chains than manacle the global trading system to a new and devastating round of protectionism, but rather a springboard towards a liberal, outward looking, free trading future.
As an independent, free trading nation, the United Kingdom has a once-in-a-lifetime chance to grasp new opportunities – with the dynamic economies of South and South East Asia foremost amongst these.

By remove unnecessary barriers to free and fair trade, and ensuring that we are not strategically dependent on fair-weather friends.

Working with strategic partners across Asia and beyond to make the global trading system fit for the 21st century, we will strengthen our trading relationships and build better, greener and more resilient global supply chains.

This will help unleash Britain’s potential to power our economic recovery, making our businesses more dynamic, and levelling up our country as we build back better from Covid-19.

2022 is Global Britain’s five-star moment to write a new chapter in our illustrious history, pioneering the future of international trade. And I intend to seize it.