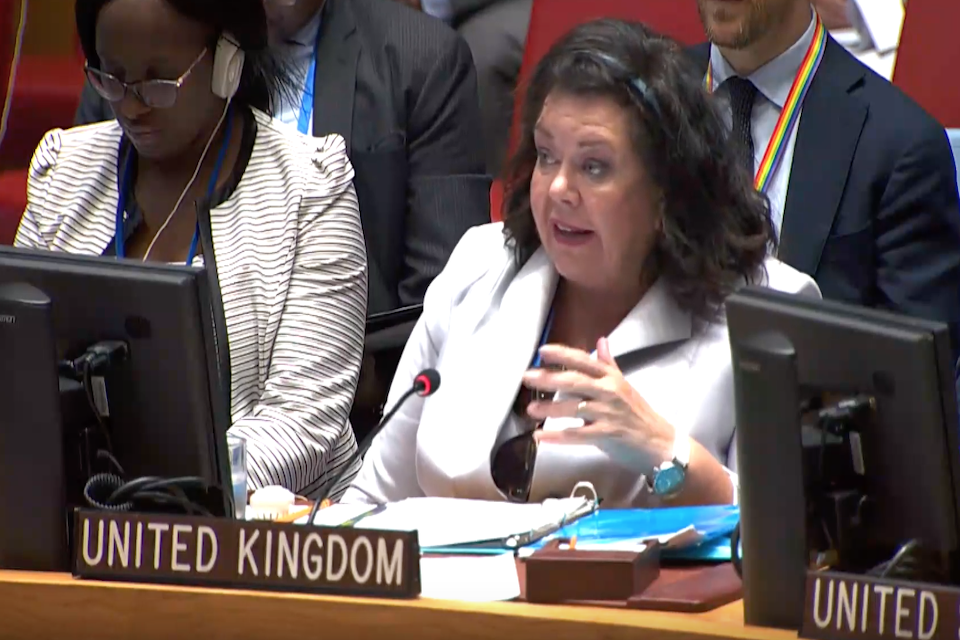 Thank you very much Mr President. Thank you to the Special Envoy and your team. The work you do remains absolutely vital, however hard pounding it is on the ground.

I’ll start if I may. Mr. President where the Special Envoy started. We had a big debate about this earlier in the week, so I won’t be rehearsing those points. But I think the fact that the indiscriminate use of force continues ought to worry everybody on the Council. There are violations of the Geneva Conventions and International Humanitarian Law going on. I asked a number of questions. Those questions remain unanswered. I look to the Russian General’s Statement. The questions are still unanswered. So I will return to them at the next Humanitarian Briefing. I wanted to, on this particular section, echo what the Special Envoy said: his appeal for all parties to stabilize the situation and implement Resolution 2245, including the nationwide ceasefire. And I think we need to keep that goal right at the forefront of our minds.

I will also take this opportunity to echo the US Representative on what we heard from the Syrian Representative in the Idlib session. We’ve discussed in this Council length of statements and the working methods, so this isn’t the time to rehearse that. But I think Mr President, it does mean that we need another discussion about it. But I did want to pick up on the point about attacking Humanitarian workers; their jobs are dangerous enough. And they do these jobs because recognized institutional services, or a country’s own services, are not able or not willing to help. And therefore, as I said in the earlier session, they deserve our protection as well as our thanks.

Turning to the political process Mr President, I hope the Special Envoy knows that he has the United Kingdom’s full support. We’re very interested in the contact group being able to take place. I think it’s a necessary first step in trying to make faster progress on 2254. So, I hope that all people who the Special Envoy is trying to bring together would approach that in the spirit of constructiveness and good faith. We support his efforts on the UN-led Geneva process. It is the only legitimate forum. We welcome the holding of the meeting in Geneva. It’s necessary, but not sufficient. But we also need progress on the ground, as he said. I hope the G20 will be able to discuss it and find a way forward. None of this is to detract from the fact that we support the political process being Syrian owned and Syrian led with UN facilitation. But I think the Special Envoy is absolutely right to say that progress can’t be made without that sort of facilitation.

I think there still is a very big question about the Syrian government’s commitment to the political process. Because month after month, we see the prevarications on the Constitutional Committee continue. If progress can’t be made, then I really do agree with the US representative, and would encourage you Special Envoy – and in fact you alluded to this yourself – to try other routes to achieving the political solution set out in Resolution 2254.

We have become – for good reason – we’ve all become very focused on the Constitutional Committee. But the bigger prize is Resolution 2254 and this includes preparing for nationwide elections observed by the UN, securing the release of detainees and establishing the nationwide ceasefire. And I just wanted to note, that unless there is progress on the ground that is meaningful for ordinary citizens, a political process will not prosper. And this means the Syrian government’s stopping the repression throughout the country in former opposition areas that it now controls. It means stopping arbitrary detention, conscription, and discrimination.

We understand Mr President that last week – only last week – the Syrian authorities issued death certificates for over 700 Syrians who died in detention in Hama. And according to reports from Syrians for Truth and Justice, families didn’t receive the bodies of their loved ones nor did they receive information about the circumstances of their death or the location of their burials. So this is a really serious hindrance to the people of Syria being able to have confidence in their own future. And there is a real sense Mr President, that the Syrian authorities are holding their own people to ransom. And it also affects and impacts on conditions for the return of refugees. And it fails to create conditions required for a stable economy. Or say that Syria eventually can become a normal country again, it fails to give people the chance to engage in the decisions that govern their lives. And it fails to give them the right to live those lives free of violence and fear. So once again Mr President let me conclude by appealing to the Syrian authorities to come to the table and engage more speedily, more positively with the Special Envoy.

Appealing to the Syrian authorities to engage with the Special Envoy

International Affairs General Assembly debate on the responsibility to p…