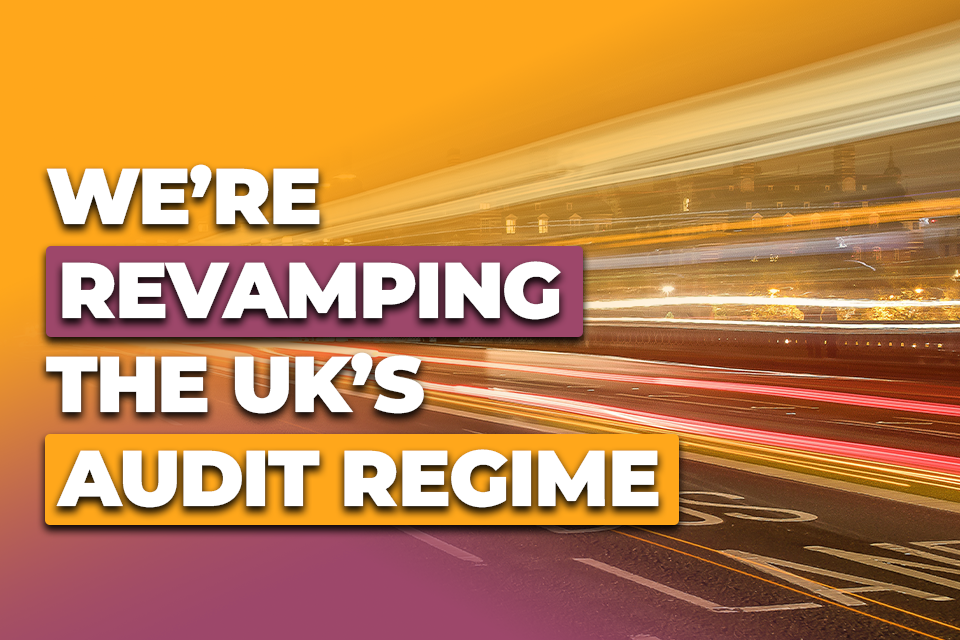 Government will revamp the UK’s corporate reporting and audit regime through a new regulator, greater accountability for big business and by addressing the dominance of the Big Four audit firms, the Business Secretary confirmed today (Tuesday 31 May).

Effective corporate reporting and audit ensures investors and the public can assess the health of large companies. It is crucial to supporting confidence in businesses, encouraging investment and growth which in turn helps create jobs.

The reforms to improve the audit regime and corporate transparency will help prevent sudden large-scale collapses like Carillion and BHS, which hurt countless small businesses and led to job losses.

Additionally, the government has announced today that it will review wider reporting burdens on large and small businesses including those from retained EU law. This will help the UK’s companies grow whilst bolstering investment, as we take advantage of Brexit freedoms to regulate in a more proportionate and agile way that works for British businesses.

In particular, the government will update the definition of micro-enterprises. This threshold, the relic of an EU directive, could be forcing too many of Britain’s smallest businesses to spend time and money preparing accounts to a level of detail only needed for larger companies, distracting them from focusing on growth and creating jobs. Government will also consider the reporting requirements on smaller public interest entities to help attract high-growth firms, and review whether there are unnecessary restrictions on remunerating directors in shares.

Collapses like Carillion have made it clear that audit needs to improve, and these reforms will ensure the UK sets a global standard.

By restoring confidence in audit and corporate reporting we will strengthen the foundations of UK plc, so it can drive growth and job creation across the country.

The Financial Reporting Council (FRC) will be replaced by a new, stronger regulator – the Audit, Reporting and Governance Authority (ARGA) – with tougher enforcement powers and funded by a levy on industry. Work on this has already begun, with the Business Secretary today acting to enable the regulator to ban failing auditors from reviewing large companies’ accounts.

For the first time, the largest private companies – not just those listed on the stock exchange – will come under the scope of the regulator, reflecting the impact they have on the wider economy.

No extra regulations will be added to smaller businesses through the reforms: the focus is on the UK’s largest companies because so many jobs, suppliers and pensions depend on them. Unlisted companies with over 750 employees and with over £750 million annual turnover will come under scope of the regulator, a threshold set following consultation to ensure the reforms are as targeted as possible and minimise unnecessary burdens.

Directors at the biggest companies who breach their legal duties to be open with auditors, or lie about the state of their firm’s finances, will face sanctions such as fines, and the government will act to address ‘rewards for failure’ – where bosses pocket bonuses despite their company collapsing.

Large businesses will have to be more transparent about their profits and losses – not dishing out dividends while on the brink of collapse – while also providing more information to investors and the public about what they have done to prevent fraud, which company metrics have been independently checked and about the risks their company faces.

To curtail the unhealthy dominance of the ‘Big Four’ audit firms, FTSE350 companies will be required to conduct part of their audit with a challenger firm. The new regulator, ARGA, will also be given the power to make big audit firms keep their audit and non-audit functions operationally separate and to enforce a market cap if the state of the market doesn’t improve.

The government has previously confirmed its commitment to publish a draft Bill to revamp the UK’s audit and corporate reporting regime this parliamentary session.

The Department for Levelling Up Housing and Communities has today also published a consultation response on plans to strengthen the local audit framework in response to Redmond Review. The plans include establishing ARGA as the system leader for local audit, which will ensure councils and local bodies are delivering value for money for taxpayers.

The plans, which build upon the recommendations of independent reviews by Sir John Kingman, Sir Donald Brydon, and the Competition and Markets Authority, were published today (Tuesday) in the government’s response to a public consultation on audit and corporate governance reform.

Reform is already under way. The government has announced its intention to publish a draft Bill, and the FRC has made good progress on many of the recommendations from the reviews. Changes in auditors’ mindset and judgements will be driven by ongoing improvements to auditing standards and guidance, while professional bodies will be expected to improve qualifications, skills and training.

Today’s publication also sets out the full range of measures the government is taking (a table of key measures can be found below), starting with a new Ministerial Direction issued today – an immediate step being taken to strengthen the regulator’s oversight of the audit profession.

Previous corporate collapses have had a significant impact on individuals and the economy: