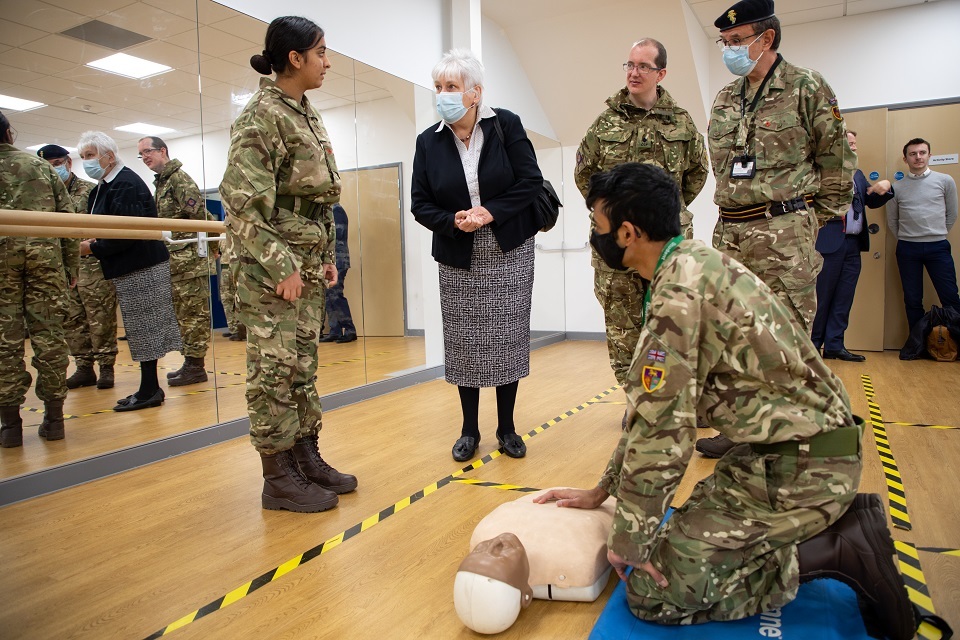 The cadet experience provides young people, irrespective of faith, with valuable skills such as teamwork and first aid, and will benefit them later in life and as they apply for university and jobs.

Avanti House, part of the Avanti School Trust, opened their doors to Baroness Goldie as an opportunity to showcase the excellent work in forming a CCF contingent. The contingent was formed as part of the Ministry of Defence and Department for Education’s Cadet Expansion Programme and now boasts nearly 40 enrolled cadets.

Minister for Defence for the House of Lords, Baroness Goldie said:

It was an absolute privilege to visit Avanti House and see young people clearly enjoying their educational experience.

The value of the Combined Cadet Force is that it gives young people an opportunity to be taken out of their comfort zone and learn the values of being part of a team, which will see them well into adulthood and I congratulate Avanti House for their great work.

Avanti House school formed their CCF contingent in 2019 and have successfully managed to maintain their programme during the COVID-19 pandemic. The group is led by the contingent commander Lieutenant Charl Weyers, and a Cadet Force Adult Volunteer Second Lieutenant Christopher Smith, both are teachers at the school. They are further supported by the School Staff Instructor Colour Sergeant David Sigona.

As part of the visit from Baroness Goldie, the cadets demonstrated a command task which involved working as a team to successfully e***t a structure. They also went through a first aid lesson. Each event was followed by an opportunity for the cadets to speak with Baroness Goldie and talk about why they joined the cadets, and how they think it has benefited their overall educational experience at Avanti House.

The Baroness was joined on the visit by Lieutenant Colonel Ashok Rao, Chair of the Defence Hindu Network, and Major Neeraj Shah, Vice-chair of the Defence Hindu Network. Both work closely with Avanti house and have run several events in conjunction with the school, including a lively debate with guest speakers. The network seeks to educate British Hindus on the Armed Forces whilst providing support to those serving.

I am a really strong believer in the cadets having benefitted from being part of the organisation myself. We are keen to support cadet contingents, especially ones at a faith school such as this, to demonstrate meaningful representation that the cadets can identify with.

There aren’t a large number of British Hindus in Defence and we are committed to supporting efforts to increase representation through our network.

The CCF programme at Avanti House has been granted approval to grow their numbers to 50 over the next year. The benefits of a CCF programme within schools was made evident by the 4-year longitudinal study, published this year, by the University of Northampton into the social impact of cadet forces. The study concluded that life skills gained by the cadet experience can improve behaviour and attitude at school, employability and social mobility.

Coronavirus UKHSA reminds travellers to China about the risk o…
0
✖