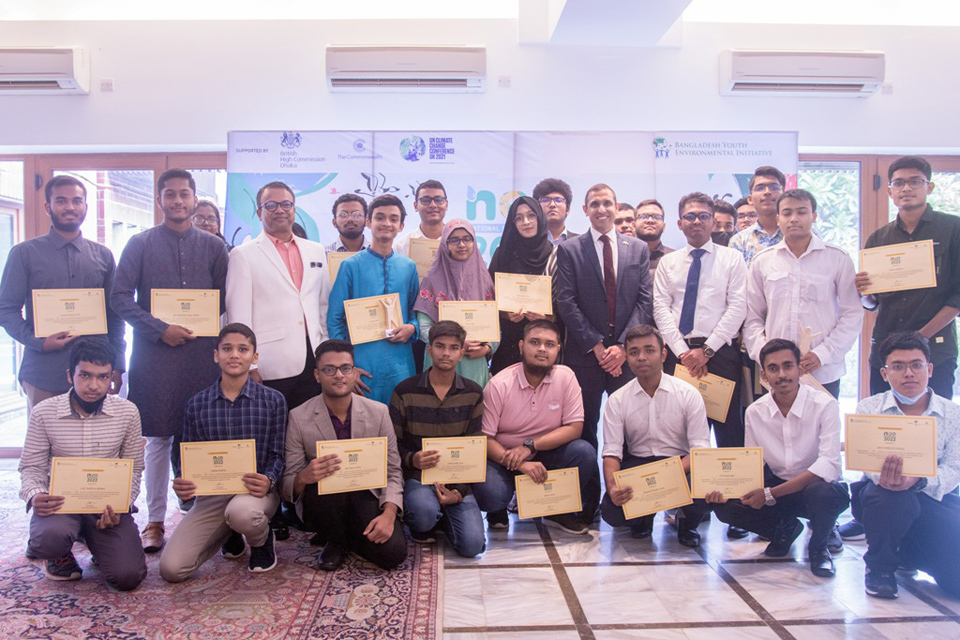 On Saturday 11 June, Acting British High Commissioner to Bangladesh, Javed Patel, hosted a reception to recognise the finalists of the Bangladesh National Earth Olympiad 2022. Of the 35 participants selected for special awards, five will be going on to represent Bangladesh at the International Earth Science Olympiad which takes place from 24-30 August.

The National Earth Olympiad is an education and knowledge movement that aims to increase environmental science education across Bangladesh, and has been organised by Bangladesh Youth Environment Initiative every year since 2012. This year, the Olympiad was supported by the British High Commission in Dhaka, through the UK Government’s roles as Commonwealth Chair-in-Office and host of COP26.

Between March and April the Olympiad reached thousands of young people across Bangladesh, and provided in-depth training to 250 young leaders on biodiversity, planetary boundaries, climate justice and environmental conservation. Bangladeshi young people aged between 14 and 18 were eligible to participate.

“Climate action is a priority for the UK and I am glad that we supported this year’s National Earth Olympiad, helping to establish the next generation of climate stewards in Bangladesh. It’s vitally important that young people are empowered to be key stakeholders in driving local, national, regional, and global change. I am inspired by the young people here today, and confident that their drive and commitment to combatting the climate crisis will help them to do just that.”

Professor Dr Kazi Matin Uddin Ahmed, Convener of the National Earth Olympiad in Bangladesh and one of the faculty members of the Department of Geology in the University of Dhaka, said

“The National Earth Olympiad has taken place since 2012, and was one of the first Olympiads that focused on the Geological and Environmental sciences. The competition has played a critical role in engaging students in understanding the urgency of the climate and environmental crisis. Since 2012, over 10,000 students have participated in this competition and over the last few years Bangladeshi Olympiad winners have also won high accolades and medals in the International Earth Olympiad. I strongly believe that the collective action that we need to solve this climate crisis will require scientists, scholars and practitioners who can guide policy action and technological innovation. The National Earth Olympiad is an important catalyser in this process.”

Founder of the Bangladesh Youth Environment Initiative, and winner of the Queen’s Young Leaders Award for 2015, Mr Shamir Shehab, said

“Against a backdrop of looming environmental, ecological and climate crises for Bangladesh and the world at large today, Bangladesh Youth Environment Initiative is striving to develop the next generation of stewards to tackle this planetary crisis. With more than 10 years of environmental action, the organisation has empowered young people from all over Bangladesh to strive toward a more sustainable, equitable and resilient planet Earth.

Bangladesh Youth Environment Initiative will continue its journey to educate and empower more young people to take climate actions with a focus on the grassroots level in the coming years to ensure equity and justice for the most marginalized and vulnerable to the impacts of climate change.”