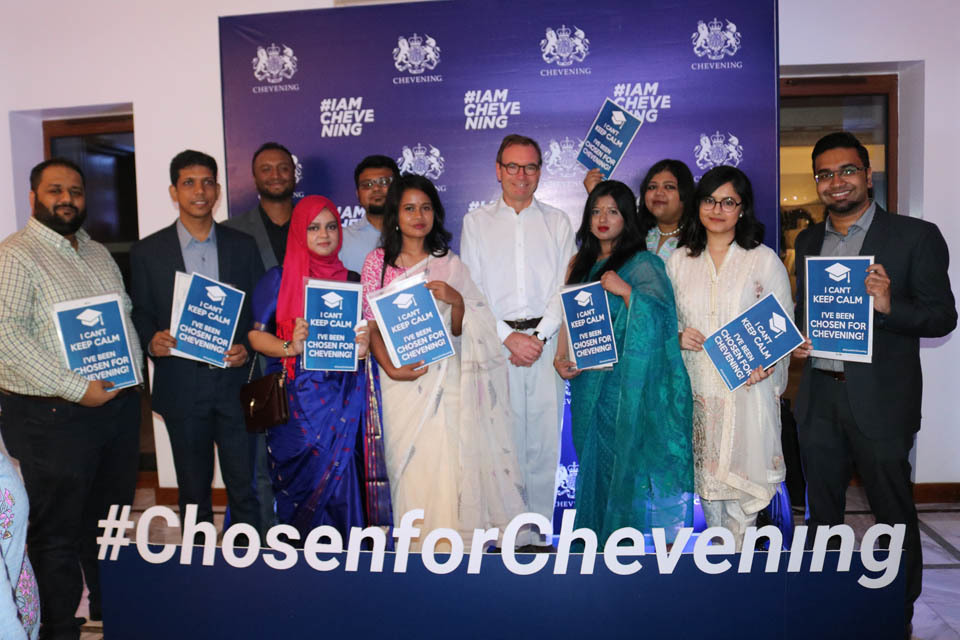 Applications for Chevening Scholarships to study in the UK are open until 5 November 2019, with applications to be submitted via www.chevening.org/apply.

The scholarship offers full financial support for future leaders to study for any eligible master’s degree at any UK university whilst also gaining access to a wide range of exclusive academic, professional, and cultural experiences.

The call for new applicants follows the selection of 13 scholars from Bangladesh, who won an award to study at a UK university this year. Successful applicants have been sharing their stories through the #ChosenForChevening hashtag on Twitter and Instagram.

Since the programme was created in 1983, over 50,000 outstanding professionals have had the opportunity to study in the UK through Chevening. There are more than 1,500 scholarships on offer globally for the 2020/2021 academic year, demonstrating the UK’s ongoing commitment towards developing the leaders of tomorrow.

We are looking for ambitious, professional, and innovative future leaders from any walk of life, who will study hard in the UK, and immerse themselves in the opportunities.

If you have demonstrable leadership qualities and you have a clear vision for the future you want to help shape, you are very likely to fit in with our community of over 50,000 alumni worldwide.

If you have what it takes to be a Chevening Scholar, please apply before the 5 November deadline.

Head of Scholarships at the Foreign and Commonwealth Office, Ben Coates, said:

Since the programme started in 1983, many of those selected for this scholarship have gone on to become respected leaders across a range of sectors. Being a part of the Chevening network instils a strong sense of pride and responsibility, I have seen this first hand and am consistently impressed by the passion and commitment of the scholars and alumni I meet.

Chevening puts you in control of your experience. You can choose from over 12,000 master’s courses at over 150 different higher education institutions. UK institutions consistently rank highly in global university rankings, so be prepared for an academically challenging and fulfilling experience.

Recently, scholars have visited the UK prime minister’s residence at 10 Downing Street, hiked up Mount Snowdon in Wales, exhibited art in London galleries, interned at the BBC, volunteered with the elderly, debated current affairs at the Cambridge Union, and sat in the home dressing room at Anfield. Some have even visited the locations where scenes from ‘Game of Thrones’ was shot. All this whilst studying on an intense master’s course. Our hope is that you will leave the UK inspired, motivated, and better equipped to bring your own ideas to life.

Visit the Chevening Scholarships website for detailed information on the eligibility criteria and scholarship specifications.

Chevening began in 1983 and has developed into a prestigious international awards scheme. Chevening Scholars come from over 160 countries and territories worldwide, and almost 1,800 scholarships were awarded in 2019/2020. There are over 50,000 Chevening Alumni around the world who comprise an influential and highly regarded global network.

The name ‘Chevening’ comes from Chevening House in Sevenoaks, Kent – currently the joint official residence of the UK’s Foreign Secretary.