Birthday Honours 2022 for services to the UK overseas and internationally 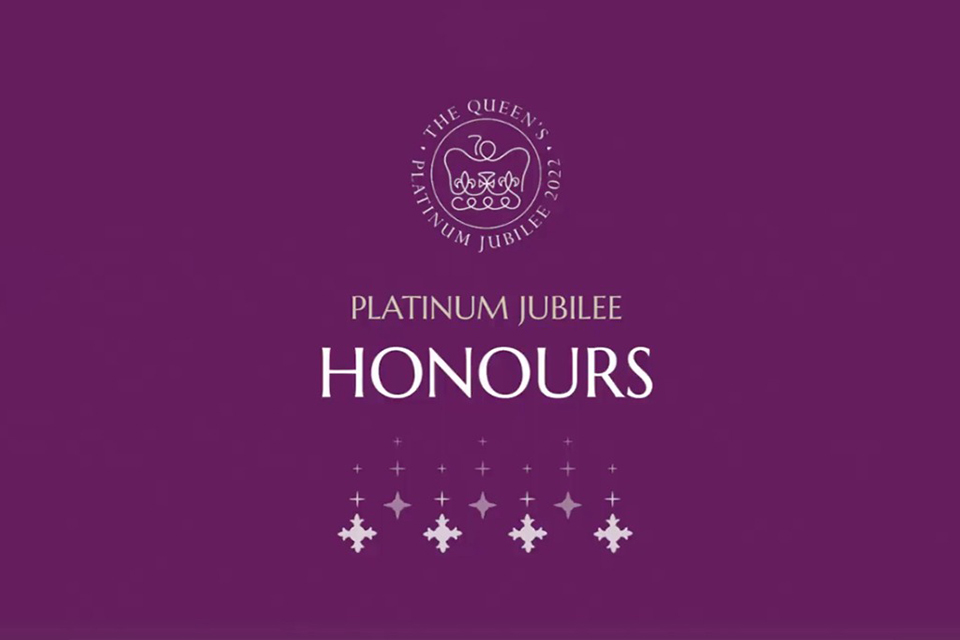 The Overseas and International Birthday 2022 Honours List published today recognises 122 extraordinary people in a wide range of fields. These include contributions made across business, charity, development, the environment, education, foreign policy, health, science and security.

Among those receiving awards this year is the scientist Professor David MacMillan, who receives a Knighthood for his outstanding contribution to chemistry. He was awarded the Nobel Prize for Chemistry last year for his ground-breaking work on the development of catalysts.

Professor Linda Colley, the widely respected international academic and historian, is awarded a DBE [Dame Commander of the Most Excellent Order of the British Empire] for her exceptional contribution to British constitutional history.

Professor David Warrell’s research of deadly tropical diseases, such as snakebite, rabies and severe malaria, have saved the lives of thousands of people around the world. The widely respected researcher is awarded a KCMG [Knight Commander of the Most Distinguished Order of St Michael and St George] for his exceptional contribution to tropical medicine.

This year’s awards recognise a number of extraordinary achievements made by British nationals who have helped lead the global fight against climate change, including by supporting the successful UK Presidency of COP26. These include an OBE [Officer of the Most Excellent Order of the British Empire] awarded to Helen Clarkson, Chief Executive Officer of Climate Group, for her work on global initiatives to improve energy efficiency and increase the adoption of electric vehicles.

Sir Philip Barton, Permanent Under-Secretary at the Foreign, Commonwealth and Development Office and Head of the Diplomatic Service, said:

I congratulate everyone receiving an honour and thank them for their hard work and years of service. The UK’s impact around the world depends on exceptional people like those recognised in this year’s Queen’s Birthday Honours. I am grateful for their outstanding contribution.

Lately Chairman of Symington Family Estates and John E Fells & Sons, receives a CMG [Companion of the Most Distinguished Order of St Michael and St George] for services to UK and Portugal relations and Social and Environmental Sustainability in the Douro region of Portugal.

Paul Symington is recognised for an exceptional and sustained contribution as the former Managing Director, then Chairman, of Symington Family Estates in the Douro Valley, Portugal. During Mr Symington’s period as Chairman, he and his cousins transformed the company from a medium sized producer into a thriving business, becoming the world’s largest Port wine producer. He and his family also spearheaded an ambitious long-term sustainability strategy, which has seen the company become the largest organic wine producer in the north of Portugal, invest in innovative research and development to adapt to climate change and deliver a 20-year programme of social impact initiatives in the Douro region.

Although recently retired, Mr Symington remains closely connected to his family business and a powerful advocate for the many social and environmental causes that he has championed throughout his career. His principled approach to business and very public attachment to British values have greatly enhanced the UK’s reputation in Portugal.

On learning of his award, Paul Symington said:

I was born less than 100 metres from the Douro river and my family has been dedicated to this great wine region for centuries, so it was with pride that I learnt of this award as I have always striven to enhance the ancient friendship between the UK and Portugal.

Chief Executive Officer, Climate Group, receives an OBE [Officer of the Most Excellent Order of the British Empire] for services to tackling climate change and supporting the UK Presidency of the 2021 United Nations Climate Change Conference of the Parties (COP26).

Helen Clarkson is recognised for an outstanding and sustained contribution to tackling climate change. She has been the Chief Executive Officer of Climate Group since 2017 and under her leadership Climate Group has driven forward global initiatives that have made significant progress in reducing emissions. A number of these, such as EV100 (members commit to all their vehicles being electric), EP100 (members commit to improved energy efficiency) and RE100 (members commit to sourcing all their energy from renewable sources) directly supported COP26 campaigns and helped to provide a clear way for businesses to implement commitments made. The Under2 Coalition led by Climate Group, which comprises state and regional governments representing 50% of global GDP, also increased its ambition adopting a new net zero commitment.

She was a key partner for COP26 in driving climate change commitments from businesses and other non-state actors and providing a major focus for 2 of the 5 COP26 campaigns in particular: clean transport and power.

On learning of her award, Helen Clarkson said:

I’m honoured to have been given this award, which recognises not just my work but all of the team members at Climate Group, who are working hard to accelerate climate action. In 2021 there was a lot of progress and it’s great for that to be recognised, but there’s still so much more to do to deliver the change that’s needed – and we’ll certainly keep pushing.

Lately Head teacher, Queen’s College, Mallorca, Spain, receives an MBE [Member of the Most Excellent Order of the British Empire] for services to the promotion of British Education, Language and Culture in Spain.

Heather Muntaner, Head teacher of Queen’s College in Mallorca for over 3 decades is recognised for her exceptional contribution to the promotion of British education, language and culture in Spain. Under her leadership the school grew and developed into one of the most outstanding schools in the Balearic Islands, offering a high quality British education in Spain to both British and International students.

In addition to her role as Head teacher, Mrs Muntaner was a member of the National Association of British Schools in Spain (NABSS) inspection service where she served for 20 years as a school inspector. For almost a decade she made a significant and entirely voluntary contribution to the NABSS Executive Committee, initially as secretary and later as a member of the inspection Monitoring Committee. Her dedication and commitment over many years has positively impacted the delivery of high quality British education, not just in Mallorca but across Spain.

On learning of her award, Heather Muntaner said:

I am truly honoured and very happy to receive this award. Working in a British school in Spain with children and young people of all nationalities and languages has been a most gratifying experience, as has the privilege of working with the National Association of British schools in Spain, an association committed to British education and to the development and high standards of all its member schools. An award is not achieved by one person alone, but by teams working together, so I would like to share this honour with all those colleagues and team members, past and present, who have worked with and supported me. Many thanks!

Retired Teacher and Founder, The Nick Webber Trust, receives a BEM [British Empire Medal] for services to Charity, to Education and to Justice in Malawi.

Pauline Webber is recognised for an outstanding contribution to charity, education and justice in Malawi through her work as the Founder of the Nick Webber Trust. Pauline, and her children, set up the Trust in memory of her son, Nick Webber, who died tragically in a car accident at the age of 28 while working in Malawi as a volunteer lawyer. Her aim was for the Trust to continue the work that her son was doing by supporting some of Malawi’s poorest and most-marginalised people through funding projects in education, healthcare and community support, as well as access to justice.

The charity that she founded, and still chairs, has provided the funding for many such projects including over 40 bursaries for secondary education, bursaries for law undergraduates committed to legal aid work, and a safe house for survivors of domestic abuse.

On learning of her award, Pauline Webber said:

I am surprised but delighted to accept this award on behalf of all who support Nick Webber Trust in so many ways, and dedicate it to the memory of my beloved late son, Nick.

Birthday Honours 2022 for services to the UK overseas and internationally

International Affairs Taking action against piracy and armed robbery in …
0
✖