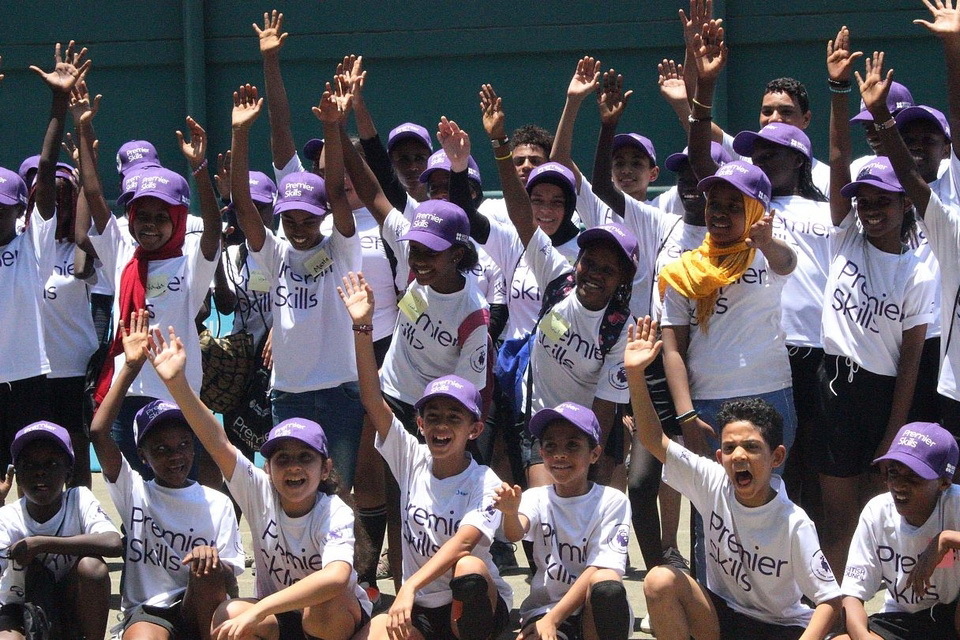 In true AFCON fashion, the British Council partnered with the British Embassy to run a football festival for 45 Egyptian and refugee football enthusiasts. Coach Hellen Orende, a Kenyan coach certified from the Premier League, was invited to deliver a Premier Skills football activity that addresses violence against women and girls (VAWG). The festival was fully funded and hosted by the British embassy at its premises.

The football festival boasted 70% participation by girls, and it was followed by an award ceremony to celebrate the programme’s coach educators, both men and women, working on empowerment and inclusion of women and girls.

The Violence Against Women and Girls Through Football programme was a pilot funded by the UK’s Department for International Development (DFID) and the British Council in two locations in Western Kenya and aims to reduce VAWG through challenging harmful attitudes and behaviours using a sport-for-development model.

Coach educators are certified from the Premier League, as they receive face-to-face training from Premier League club coaches who give them the skills and support to develop their own community football projects.

Teaching children the importance of diversity helps our community grow closer and become more impactful. Different genders, mental or physical abilities, or social standards, are meant to melt away when they come to the field, and that’s what we do here, and it’s resulted in amazing achievements. For example, I wanted to integrate children with disabilities in the game, because they have such resilience and are a source of inspiration. So, I put together the first national integrated football team and they brought home the golden medal at the Special Olympics at Chicago in 2018.

Through Premier Skills, young people, including the most vulnerable in society, are given opportunities to become better integrated into their local communities, to develop their skills for employability and raise their self-esteem. Today, there are 28 Egyptian coach educators and over 80,000 children, mostly girls, impacted by the programme.

Football is an international language that brings nations together. This is why we have collaborated with the British Council and Premier Skills to bring a sense of home to refugees though this festival. I am particularly glad that 70% of the festival’s players are females who are not only showcasing their brilliant football skills, but also building a brighter future where female inclusion is a norm in all walks of life.

We are proud of the long-standing partnership between the Ministry of Youth and Sports and the British Council. It is a partnership that we encourage to sustain, and which supports the Egyptian youth in different ways. We hope that the British Council will join us in implementing the Ministry’s strategy, which aims to convert youth centres into community service centres.

The Ministry of Youth and Sports also seeks to cooperate with the British Embassy in Cairo in the field of entrepreneurship, including more programs that allow the empowerment of women and girls, especially in light of the political leadership concern for women, who are a cornerstone in all plans and strategies.

There is a successful partnership between the Ministry of Youth and Sports and Premier Skills in relation to the project “1000 Girls, 1000 Dreams”, which aims to involve 1000 girls aged 12-14 in football training centres in eight governorates in Upper Egypt

has no refugees, but brothers who live in the Egyptian society and integrate easily and that this is always referred to by the political leadership.

The event is also in line with the UK’s continued commitment to resettle refugees and to support the Egyptian government in protecting and hosting them. The UK has committed EGP 1.6bn to support the region, of which EGP 73.3m has been allocated to Egypt, to support vulnerable migrants and create alternatives to irregular migration.