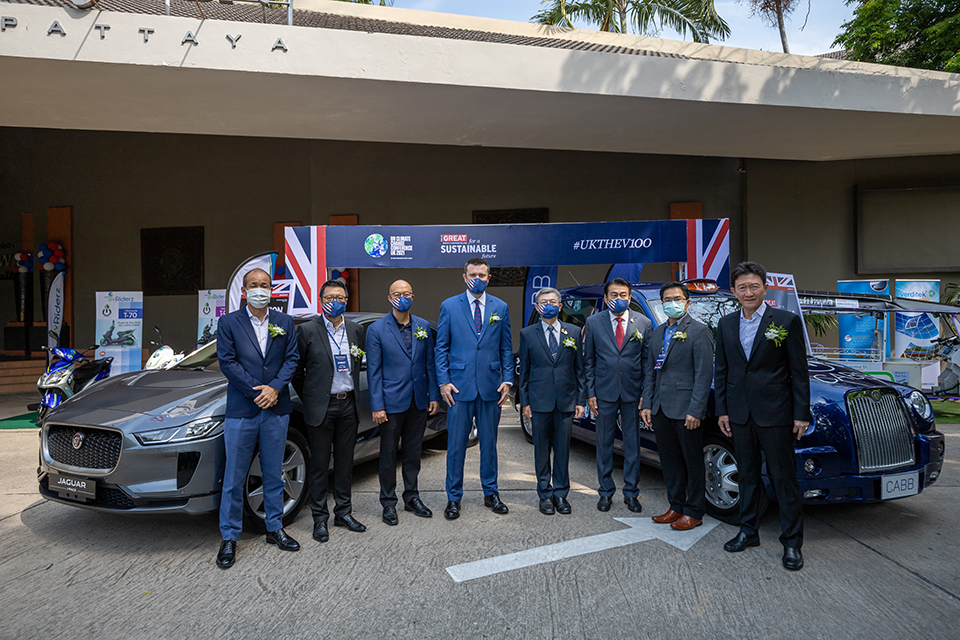 Like many other nations internationally, Thailand is facing widespread air pollution and traffic congestion. As a consequence, conversations centred on climate change and urban development have continued to gain momentum in recent years, which reflect the growing significance of climate change issues being brought up at a global stage.

This year, the UK has the privilege to host the 26th conference ‘COP26’ in Glasgow, Scotland in November under five key themes – adaptation and resilience, nature-based solutions, energy transition, clean road and transport, and finance.

The UK has been rolling out policies and activities in support of smart city technologies, not only to better manage cities and improve quality of life, but also to lead the transition towards greener cities with clean energy and transport following its agenda and aspirations for COP26. In Thailand, the UK has launched several initiatives towards strengthening partnerships in smarter cities development. Together with the Digital Economy Promotion Agency (DEPA), the British Embassy Bangkok has launched the ‘Smart City Handbook: Thailand’ which sought to identify the scope of opportunities for collaboration and present relevant case studies in various areas for potential partnerships between the UK and Thailand. This close collaboration was further deepened through the ‘Smart City Workshop Series’ previously hosted in two key provinces in Thailand – Chiang Mai and Khon Kaen.

Global emissions from road transport are rising faster than in any other sector. Road transport accounts for over 10% of global greenhouse gas emissions, and this is only increasing. The UK is investing £2.5bn in carbon reduction, with grants available for plug in vehicles and funding to support charge point infrastructure. The UK government is taking an historic step towards net zero with, our commitment to end the sale of new petrol and diesel cars by 2030.

With growing global concern about climate change, it is now widely recognised that there is a need for collaborative efforts in order to adopt climate-friendly measures for economic and social development. Thailand’s new target for 100% Zero Emission Vehicle (ZEV) registration by 2035 will lead to positive impact on new job creations, healthier communities and significant reduction of air pollution.

In conjunction with the final Smart City Workshop series in Chonburi, the embassy views this as the perfect opportunity to introduce the UK’s Zero Emissions Electric Vehicle campaign alongside the embassy’s existing smart city campaign. Zero Emissions vehicles will directly lead to a significant reduction of greenhouse gas emissions which is the main cause of global warming. Moving towards this change, however, will require adequate infrastructure for charging stations, which is why Zero Emissions Vehicles roll-out and city planning must be developed hand in hand. This event marks the launch of the EV100 campaign in Thailand aimed at promoting Zero Emissions Vehicles in Thailand through cooperation with private sector to drive policies in support of both EVs and charging infrastructure.

EV100 is a campaign that brings together private companies committed to Electric Vehicle Transition by 2030 by building demand, driving policies with governments and supporting the network of entrepreneurs in the region in order to make EVs the new normal in the near future.

Besides the panel discussion, the Embassy also partnered with leading companies to showcase British electric vehicle innovations, from the luxurious Jaguar I-PACE all electric SUV, the 100% electric-powered motorcycles from EVRiderz world’s first triple play company. And ride hailing application, Asia Cabb’s fully-electrified prototype of the iconic TX4 London Taxi licensed from the UK which is being produced for the Thai market, with plans to commercially roll-out full EV models next year. And last but not least, the TukTuk from the Electric Vehicle Association of Thailand powered by flexible solar panels from British company, Verditek Solar.

Despite the UK smart city workshop series coming to a closure, the UK’s looks forward to continue partnering with Thailand to help grow its smart city ambitions. Through the ‘Tech Export Academy’ programme, Thailand has been chosen as the sole destination for a delegation of 30 British companies to embark on its first virtual trade mission, where the UK looks to forge even more great partnerships come May this year.