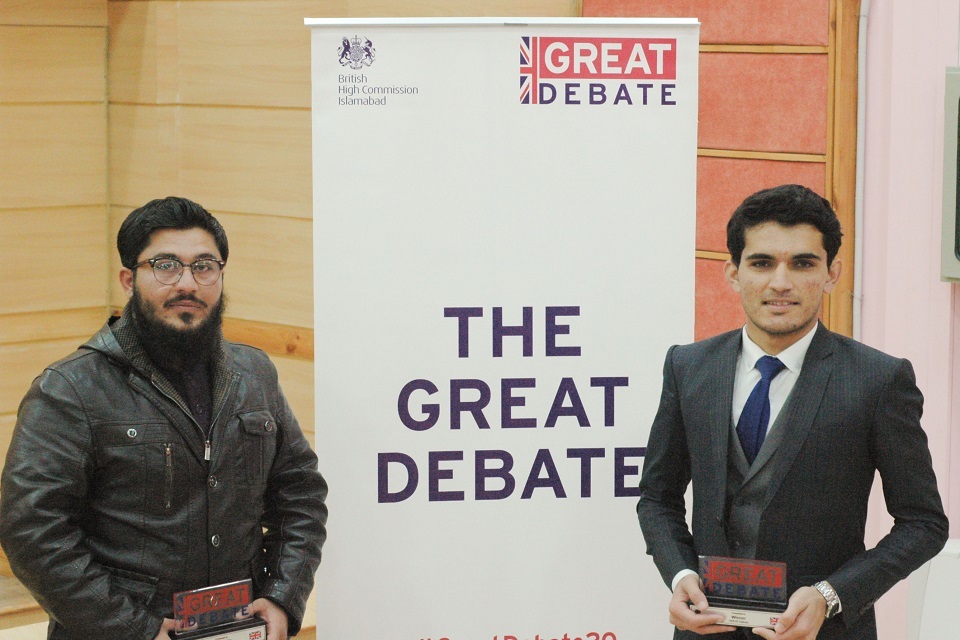 The British High Commission continued the fifth edition of its GREAT Debate competition with a regional round at the Balochistan University of Information Technology, Engineering and Management (BUITEMS) in Quetta last week.

The competition featured 27 students from 9 different universities across Balochistan. At the end of an intense competition, Asmat Ullah from BUITEMS was the winner and Muhammad Umair from the University of Balochistan was the runner-up.

The GREAT Debate competition is taking place from December 2019 to March 2020 in 6 cities across Pakistan.

I am delighted that we have brought our GREAT Debate competition to Balochistan for the second consecutive year. It’s fantastic to see the vibrancy and energy of the youth of Quetta who have participated in this competition in strong numbers. The topics that were debated included climate change, an important issue that will shape our future. This is especially important as the UK prepares to host a major UN summit on climate change in November 2020.

The competition gives the youth of this country a platform to participate in debates, interact with other students from different universities and hone their skills in research, analytical thinking and public speaking. These skills will enable them to contribute to a brighter future for Pakistan.

I wish the winner and runner-up the best of luck for the final in Islamabad.

Debate and discourse distinguishes us as human. Never has the characteristic been more important than in the 21st century. I am delighted that the British High Commission has brought its GREAT Debate competition for the students of Balochistan again.

University students across Pakistan who are interested in debating and taking part in the GREAT Debate competition can register immediately on greatdebate.com.pk

The GREAT Debate is a debating competition for university students. There will been 6 events – in 6 different cities (Islamabad, Lahore, Karachi, Peshawar, Quetta and Faisalabad) involving students from leading universities across Pakistan – and the winner and runner-up of each round will compete in the final in Islamabad.

The regional rounds have taken place in Lahore and Quetta. The upcoming regional rounds are in Peshawar, Islamabad, Faisalabad and Karachi at the end of January and early February.

The winner and runner-up of the overall competition will receive a scholarship reward to contribute towards their tuition fees.

International Affairs Letters to the Devolved Administrations on the EU …