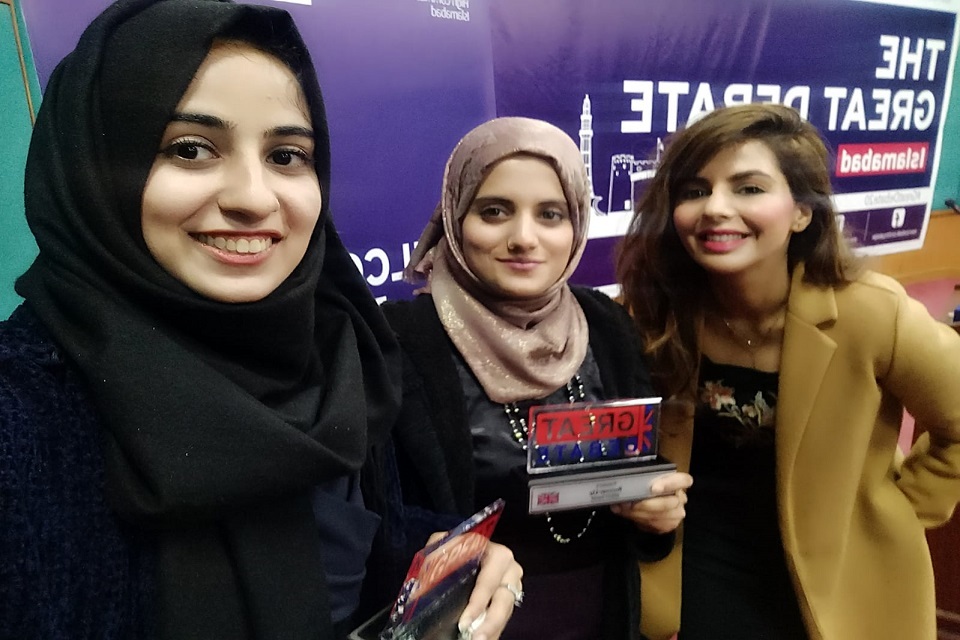 The regional round in Islamabad followed previous rounds in Lahore, Quetta and Peshawar. The competition featured 27 students from universities across Islamabad and Rawalpindi. At the end of an intense competition, Fatima Ishtiaq from International Islamic University, Islamabad (IIUI) and Hamna Amir from National University of Sciences and Technology (NUST) were declared the winner and runner-up respectively.

The GREAT Debate competition is taking place from December 2019 to March 2020 in six cities across Pakistan.

The British High Commission has always played an important role in strengthening the educational links between the UK and Pakistan. The UK is committed to supporting Pakistan, especially its youth, in exploring and showcasing their creativity and talent.

Now in its fifth successful year, the GREAT Debate competition offers a unique experience to students to hone their craft of how to make a case, the gift of persuasion and reasoning an argument. These skills are essential traits to possess for future leaders and opinion formers.

I look forward to seeing the winner and runner-up do well in the final.

This is the fifth annual edition of the British High Commission’s GREAT Debate competition. Since 2015, the competition has taken place across 15 universities and 12 cities in Pakistan. The previous winners of the GREAT Debate competition have included: Gaudhan Aslam from Forman Christian College in Lahore, Taha Ahmed from Aga Khan University in Karachi, Mohiba Ahmed and Haris Ali Virk from Government College University in Lahore.

The GREAT Debate is a debating competition for university students. There will been six events – in six different cities (Islamabad, Lahore, Karachi, Peshawar, Quetta and Faisalabad) involving students from leading universities across Pakistan – and the winner and runner-up of each round will compete in the grand final in Islamabad.

The regional rounds have taken place in Lahore, Quetta, Peshawar and Islamabad. The upcoming regional rounds are in Faisalabad and Karachi at the end of January and early February.

The winner and runner-up of the overall competition will receive a scholarship reward to contribute towards their tuition fees.