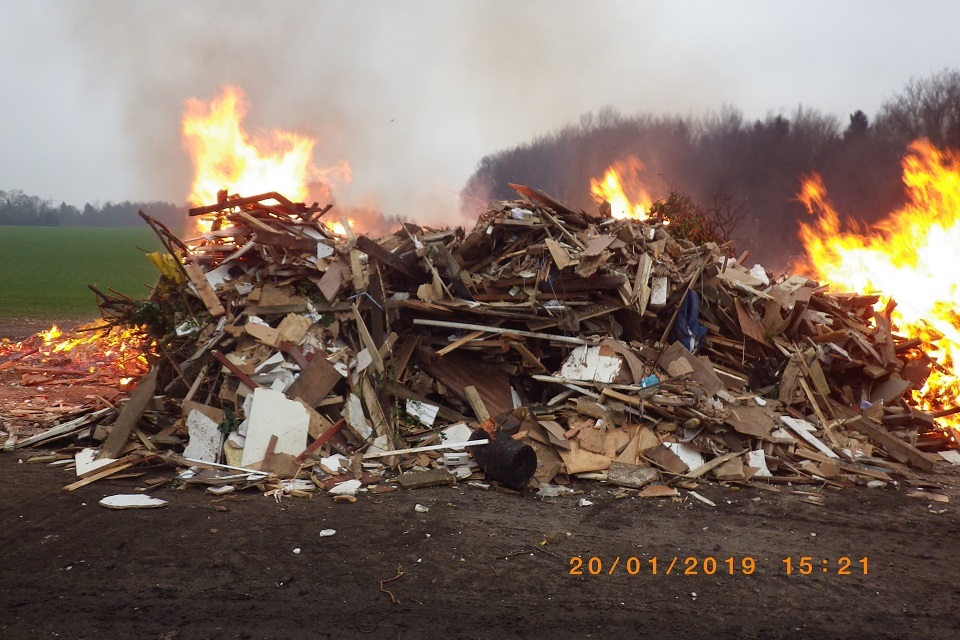 Father and son David and Nicholas Channer were convicted, with the latter jailed, following an investigation by the Environment Agency. The pair were caught continually storing and setting light to rubbish at their farm at Mop End, near Amersham, putting the environment at risk.

Oblivious to countless letters and visits from environmental crime investigators, the two accumulated everything from wood and metal to waste from two agricultural concerns.

They then set light to the rubbish as a cheaper alternative to authorised disposal. The blazes left mounds of smouldering ash. The Channers even incinerated rubbish they said had been fly-tipped.

As J Channer & Sons, David Channer provided farming services across central southern England out of Mop End Farm, which he owned. The court heard, however, Nicholas Channer played more than an active role in the company.

David Channer admitted burning waste collected from elsewhere, leading district judge Malcolm Dodds to say the 67-year-old was “pig-headed” for not responding to “plentiful warnings” from the Environment Agency.

DJ Dodds added Channer took no steps to limit the effect of his son’s tree maintenance firm as the illegal rubbish built up.

Nicholas Channer managed Chiltern Tree Care, based at the farm. The operation created significant amounts of waste that should have been disposed of legally.

The 47-year-old was already subject to a suspended prison sentence for unrelated matters at the time of these offences. As a result, Nicholas Channer was jailed by Aylesbury crown court for five months, on top of the eight months for waste crime.

David and Nicholas Channer have been rightly punished by the courts for riding roughshod over the law around managing waste safely and securely.

The men had no system in place to limit the amount or type of waste held at Mop End Farm. Nor did they establish measures to protect the environment or human health.

The law requires anyone dealing with waste to keep it safe, make sure it’s handled responsibly, and only given to businesses authorised to take it.

Investigators made a series of visits to the farm between 2017 and 2019. They also wrote to the men, telling them to stop illegally storing and burning the waste.

The Channers carried on breaking the law regardless. Smoke with a chemical odour caused an Environment Agency officer’s eyes to sting.

High Wycombe magistrates’ court was shown body-worn video and photographs of large piles of rubbish on fire – painted and treated wood, green waste, chipboard and plastic among the items burning.

When asked to explain their actions, the Channers told the agency they either hadn’t seen letters from crime officers, or were unaware exemptions from permits for managing the waste had expired.

The agency had been alerted to what the men were doing by Buckinghamshire County Council.

Crime officers visited Mop End Farm in January. Open land was used to hoard everything from white goods to soil, bricks and wood they would later torch. Nicholas Channer confessed to holding 100 tons of scrap metal there he obtained from online customers or by driving around looking for it.

Later accompanied by county council enforcement officers, investigators found burning cardboard and PVC. They also saw a mountain of ash, with the charred remains of treated and untreated wood and other debris.

With no response to the request to stop offending, the Environment Agency took legal action against the two men.

While the areas where the fires took place have been partially cleared, David Channer, as landowner, has until December this year to remove the remaining contaminated ash.

The offences were that between or before January 2017 to June 2019, they allowed waste to be stored and burned. They were also prosecuted for not properly documenting moving waste between different sites.

The pair were prosecuted eight years ago for committing similar offences.