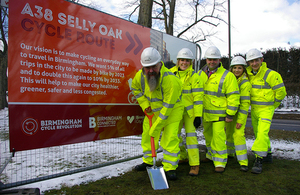 The Cycling Cities Ambition (CCA) fund is part of the Cycling and Walking Investment Strategy. This is the delivery strategy for the government’s commitment to switching more journeys to active travel to improve health, quality of life and the environment, and local economy. Data from the National Travel Survey shows that 13% of journeys under one mile are by car, increasing to 51% for journeys under 2 miles. This shows there is massive potential for increasing walking and cycling for short trips.

The CCA funding was announced as part of the Department for Transport’s cycle safety review. Its aim is to encourage more people to cycle as part of everyday journeys, as well as help ensure that our roads are as safe as possible for all who use them.

The programme provided grants to fund cycling infrastructure in 8 cities, or groups of cities, in England, including Birmingham.

Recently completed schemes include 4 miles of new segregated cycle track along 2 ‘A’ road corridors, with new cycle parking due to be installed along these routes shortly to complement parking facilities already installed in the city centre.

There has been a comprehensive upgrade of 32 miles of canal towpaths; information totems were installed on a one mile route in the city centre, and access ramps were added at 8 locations.