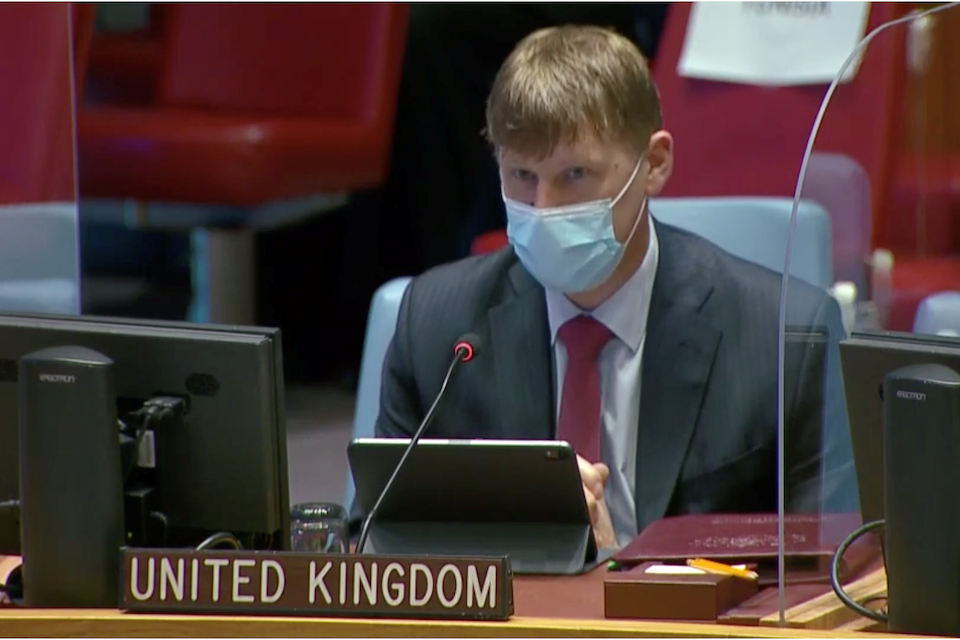 Thank you, Mr. President, and my thanks also to SRSG Annadif for his valuable briefing. Mr. President, let me begin by saying that the United Kingdom very much welcomes the establishment of a civilian-led transitional government in Mali. We commend the decisive action taken by ECOWAS in response to events in Mali in August, and the strong role of the sub-region in supporting progress since then.

Last time we met to discuss Mali on the 19th of August, the United Kingdom called for a return to civilian Government as soon as possible, to deliver for, and engage with the frustrations of the long suffering Malian people. So we echo the Secretary-General’s call for the transitional authorities to take ownership of implementation of the 2015 peace agreement. The 2015 agreement remains the bedrock of building stability and peace in Mali. I’m pleased to hear from SRSG Annadif that a signatory group has entered the government, and I’m pleased to hear that implementation of the agreement is a key part of the new Government’s mission. But colleagues, let us be frank. There has simply not been enough progress on the political track since 2015. Neither has the former Government and its Ministers nor the signatory groups taken seriously enough their obligations to deliver that agreement. Meanwhile, the people of Mali have suffered and peacekeepers in MINUSMA have paid with their lives. So I want to pass today a clear message to the new government of Mali and to all the signatories of that 2015 agreement. There is no time to waste. There can be no more evasion of responsibilities. You must now demonstrate that you are serious. Serious about securing the country, serious about providing services to your people who need them, especially in the north and in the centre.

Now I see in the chamber the distinguished representative of Mali and I look forward to hearing from him later. He is an excellent colleague and always has important things to say. But I’d just like to say to him that I hope he can report to his Government that by our next meeting he will be able to tell us about substantive progress on the following five issues. Firstly, implementation of the 2015 agreement, not words about an intention to do so, but actual steps in that direction. And I want to echo the Estonian ambassador’s words on the importance of the participation of women. Second, concrete steps to return the state to the north and the centre of Mali and to provide services to the people who live there. Thirdly, completion of the catch up phase of the DDR process. Fourth, to investigate reports of human rights violations and abuses and take action against impunity. And fifth, on the political, administrative, electoral and institutional reforms to prepare the ground for elections.

Now, none of us expect miracles in three months, but I think we need to see action on all those strands and evidence of progress. And we are there to support Mali. The UK will be following up both in New York and in Bamako. We continue to play our part. Our bilateral spend in the Sahel is now over $100 million a year, which is primarily humanitarian, and through multilateral channels we contribute a further $390 million a year and the UK will deploy a long range reconnaissance task force to MINUSMA this year.

Mr. President, with respect to MINUSMA, may I just say that we welcome the progress made by the mission under trying circumstances, including the difficulties and challenges of COVID-19. The rationale for mission adaptation to increase MINUSMA’s flexibility and mobility of operations remains strong. MINUSMA will, of course, continue to have a vital role to play in supporting implementation of all of the points I have just made. But we will look to the Malian authorities, of course, primarily with MINUSMA to reinvigorate the process. Let me end, please, by just saying again, we are here to support Mali. We are here to support the people of Mali and the government of Mali, and we are here to support Mali’s transition. But we expect to see tangible progress in the next reporting period. Thank you, Mr. President.

Building stability and peace in Mali