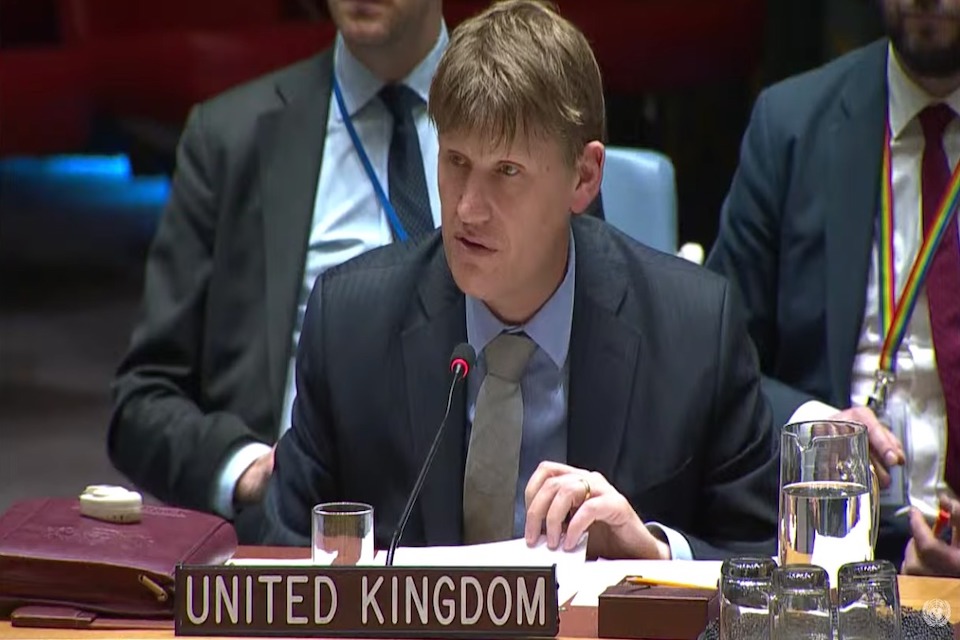 Mr President, the Security Council has met month after month for over four years to support the efforts of the Special Envoy to find a political solution pursuant to Resolution 2254. The success of this process depends on the genuine will of all parties to find a solution, as well as efforts to make progress on all aspects of the process in tandem.

Yesterday, the United Kingdom hosted envoys from the Syria Small Group alongside Dr. Nasr al Hariri. We were all in agreement that a genuine political settlement remains the only solution to the Syrian conflict. But it is clear to the UK that the key ingredient to this solution is missing: the genuine will of the Syrian regime. After years of hard work by the UN Special Envoy negotiating the composition and rules of the Constitutional Committee, we all welcomed in November the announcement that agreement had been reached and the Committee would convene in Geneva. This was an historic moment, which would open the door to the entire political process. And yet it is with deep disappointment, despite the best efforts of the Special Envoy, that after two meetings, the regime is yet again refusing to engage.

Mr President, on other aspects of Resolution 2254, there has been a similar lack of engagement. Despite the Security Council meeting in August to highlight the specific issue of detainees, no progress has been made. At that meeting in August we set out the immediate steps that the Syrian authorities could take to make an important gesture of reconciliation. And we would remind the Syrian authorities of our call for them to release immediately all those arbitrarily detained; to provide lists of detainees and their locations the United Nations; and to grant the ICRC access to detention facilities.

Mr President, the Syrian authorities, emboldened by their support from the Russian Federation, have refused to pursue any course of action other than a military one. They have used the fight against terrorism to justify continued disproportionate attacks against areas heavily populated by civilians, and to justify attacks against civilian objects such as schools, hospitals and marketplaces – a practice which the Council demanded the immediate cessation of in Resolution 2254.

Right now, despite the announcement of various ceasefires, airstrikes continue in Idlib, where, according to OHCHR, more than 358,000 people have been displaced since December.

It’s outrageous that we continue to talk about attacks against civilian targets in the north-west, despite the repeated concerns expressed by the United Nations, and the members of this council, and the ongoing Board of Inquiry investigation. The United Kingdom reiterates that all parties, including those around this table, must uphold international humanitarian law and further calls for the Board of Inquiries findings to be made public.

Mr President, the only hope for Syria is for the regime to reverse its behaviour and commit to a political process which promotes reconciliation and avoids further needless conflict, repression and death.

And, Mr President, for their Russian protectors to get them back to the table.

Calling for a political settlement in Syria

International Affairs Foreign Secretary meeting with US Secretary of Sta…
0
✖