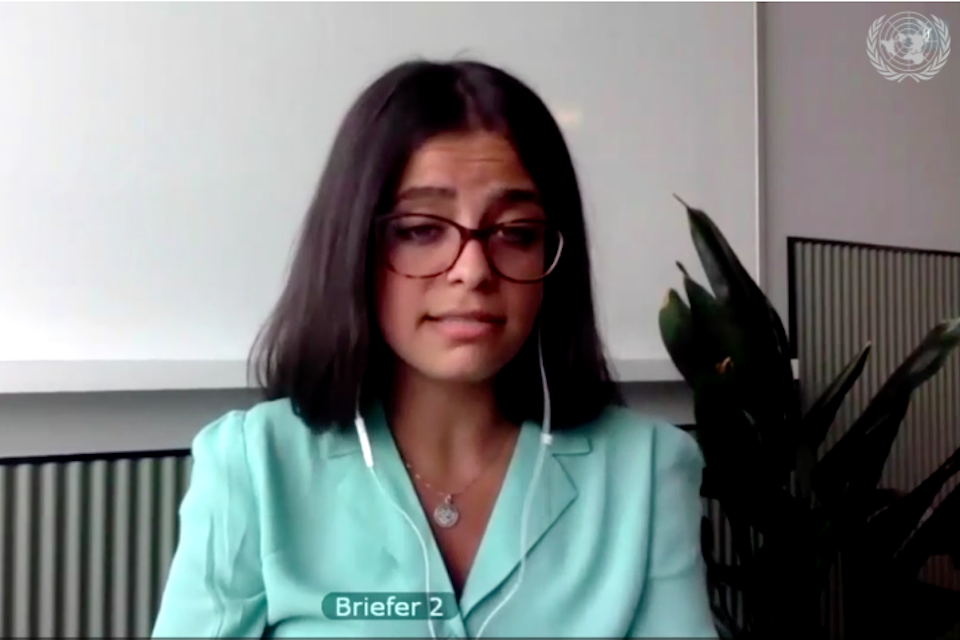 Thank you, Mr President, and to Special Envoy Pedersen for his briefing, and Ms Wafa Mustafa for her briefing on the vital work done by Families for Freedom.

We remain deeply concerned by the situation in northwest Syria. Although Russian and Turkish patrols have now managed under constant threat over the full distance of the M4 highway, reports of recent Russian airstrikes on Al-Bab, as well as increased shelling and terrorist attacks, are a real potential for a slide back to the levels of conflict that we saw at the start of this year.

We know what the humanitarian impact of the breakdown of the ceasefire in the northwest would be. Indeed, as we have yet more evidence through the recent Commission of Inquiry report released on the 7th July or, as OHCHR puts it, unfathomable suffering endured by Syrian children, women and men during the military campaign launched on Idlib in 2019 and the start of this year. This includes indiscriminate attacks by pro-regime forces, backed by Russia, on civilians, hospitals and schools; the killing and injuring as thousands; arrests and torture; probable war crimes by extremist forces; and dire displacement conditions at the border. This is made clear in the Commission of Inquiry report, which found that 47 attacks that were investigated in Idlib were conducted by regime ground and air forces and were assisted by Russian air forces. The Commission also found reasonable grounds to believe that war crimes committed by the regime and Hayat Tahrir Al-Sham. It is the task of the UN and its Member States – and in particular, all members of the Council – to ensure this does not reoccur.

If the ceasefire does break down, two additional factors are likely to exacerbate suffering. Firstly, cases of COVID-19, have now been confirmed in the northwest, and the numbers are beginning to increase. Tackling a widespread outbreak in the northwest would be, in any case, a challenge, but further conflict would likely render this task impossible. Secondly, Russian and Chinese politicization of humanitarian access means that it is much more difficult for the 1.3 million people who had previously received aid through the Bab al-Salam crossing to receive that aid.

The consequences of a further outbreak and violence would be catastrophic. The UK therefore once again calls for an immediate cessation of hostilities in support of the requests of the UN Special Envoy and UN Secretary-General. This call is as urgent now as ever. We call on all parties to work with a Special Envoy towards a nationwide ceasefire.

We welcome the attendance and briefing of Wafa Mustafa today and commend her vital work and that of Families for Freedom, her bravery and fighting for young girls, women and families who were impacted by the detentions. We call on the Syrian regime to engage with the UN Special Envoy to discuss this critically important issue. There needs to be widespread releases of political prisoners and vulnerable people in line with what we all agreed in UNSCR 2254. Medical care must be available to those in detention. We were moved by Ms Mustafa’s own story about her father. Indeed, there remain an estimated 120,000 persons missing as a result of this conflict. These include persons missing as a consequence of summary executions, arbitrary and incommunicado detention, kidnapping and abduction, enslavement, sarin gas attacks and other human rights abuses, as well as combatants and civilians missing as a direct result of fighting in the day to day ravages of war. We recognise the psychological trauma of those left behind.

The UK is proud to provide financial support, $1.6 million in 2019 to next year, for the International Commission for Missing Persons’s efforts towards the immense task of accounting for missing persons in Syria. We wholly support ICMP’s role as the holder of an impartial missing persons’ database, and we stress the need for a missing persons’ process that accounts for all missing persons, regardless of their role in the conflict or origin, in accordance with international human rights and the rule of law. This work is vital for the rights of families of the missing to justice, truth and reparations.

Any credible peace process has to address the issue of missing persons and detainees. In order for this to happen, the Syrian regime must properly is genuinely engage with the Special Envoy and other the parties on the peace process.

We take note of the parliamentary elections held in Syria on Sunday. UNSCR 2254, which we adopted unanimously, holds unequivocal regarding expectations for elections in Syria. They needed to be free and fair, administered under the supervision of the United Nations and meet the high standards of transparency and accountability with all Syrians, including members of the diaspora, are eligible to participate.

Sunday’s parliamentary elections clearly did not meet these requirements. There were no independent observers, and nearly half of Syria’s population, including six million refugees, could not even vote. The way in which these elections were conducted sends a clear message that the Syrian regime has not been really interested in inclusion or fairness or a political process that is owned and led by all Syrians, or that allows all Syrians a role in deciding their own future.

Finally, I would just like to address the comment made by Russian representative about the White Helmets. The UK is proud of its support for the White Helmets and its life-saving search and rescue operations and activities in Syria alongside other donors. The organisation is estimated to have saved over 115,000 lives and provided essential services to more than four million Syrians.

Calling for an immediate cessation of hostilities in Syria

International Affairs Embassy receives certification as a good place to …
0
✖