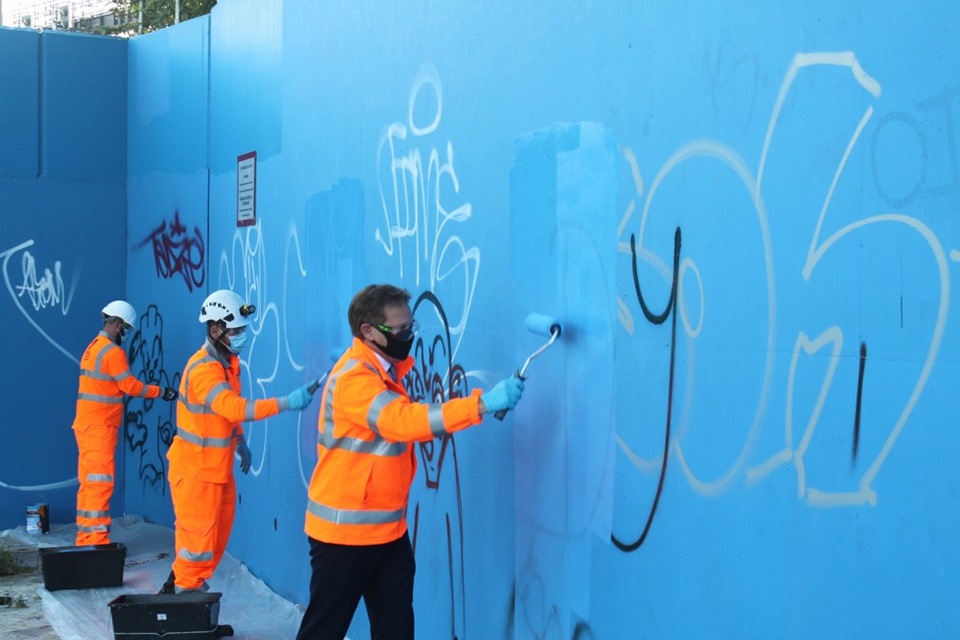 Action is being taken to tackle the ‘blight’ of graffiti on Britain’s roads and railways as part of the Great British September Clean, Transport Secretary Grant Shapps has announced today (15 September 2020).

In a letter to the rail industry, the Transport Secretary has called for long-term plans to tackle the issue. These proposals should build on action already taken, including a review of response times to graffiti vandalism so any instances are dealt with quickly, helping to prevent more serious crimes and passengers to feel safe when returning to the railway.

Network Rail has already undertaken significant work in this area, allocating an additional £1 million in the spring to carry out a graffiti blitz on top of its annual £3.5 million programme of anti-graffiti measures.

Graffiti on the railway can be unsightly, make passengers feel unsafe and, if not dealt with quickly, lead to further crime taking place. People often put their lives at risk in the act of spraying difficult surfaces, such as bridges or trains in sidings.

During the lockdown period, Highways England has also undertaken a cleaning blitz around main roads – removing 33% more graffiti compared with the same time last year. Highways England will now double the level of its resources and activity, to speed up graffiti removal rates on the road network across England.

He also visited a railway arch mural created by street artist Jimmy C in memory of the victims of the London Bridge terror attacks. The series of hearts floating in space on Stoney Street is one of 100 murals produced by the artist – and fellow street artist Lionel Stanhope – set to be in place across stations in the South East by spring 2021.

Phenomenal efforts have been made throughout this pandemic to ensure our transport network is clean and maintained to the highest standards, helping keep people safe, and people deserve roads and railways that are not blighted by graffiti and vandalism.

As we continue our focus on building back better as we recover from COVID-19, I want us to feel proud of our transport infrastructure and public spaces. Our extra investment to remove graffiti from our roads and railways means we can double our efforts to fight this issue and represents a positive step in the right direction.

We would encourage everyone to do their bit to help clean up the country and, during the Great British September Clean, ridding our transport network of graffiti would be a positive step towards creating a better environment for everyone.

Places that are covered in graffiti, particularly low-grade tagging, signal to the community at large that an area is unloved and uncared for and leads to increases in other environmental crimes such as littering and fly-tipping so we would urge everyone responsible for looking after our transport network to keep it graffiti and litter-free.

The government has been working closely with train operators to return services back to close-to-normal levels as passenger numbers increase, putting extensive measures in place to make sure their services are safe to use, including heightened cleaning procedures, queue-management systems, and providing hand sanitiser in the busiest stations on the network.