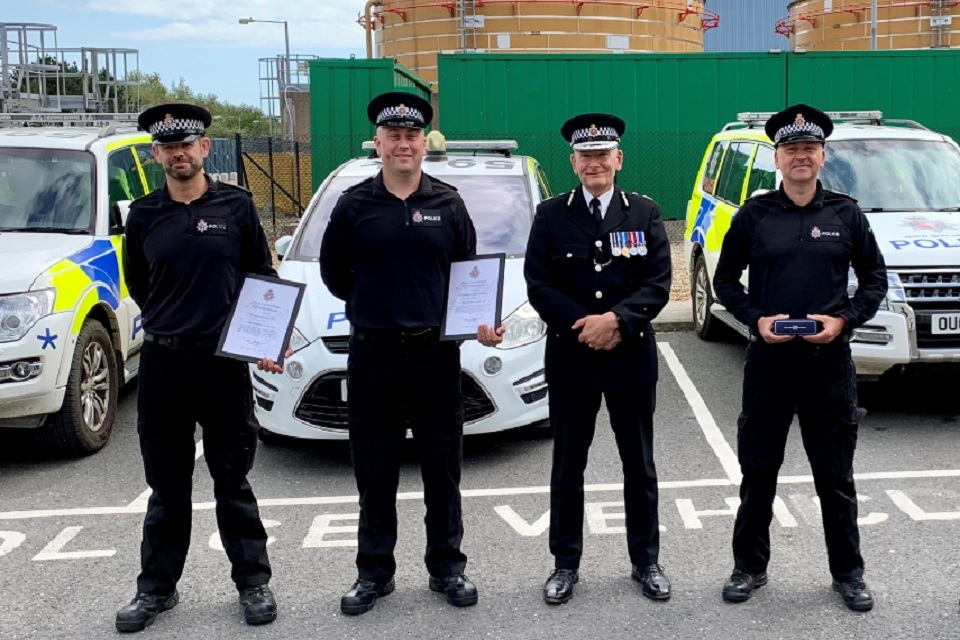 Sgt Mike Ellis and PC Craig Clemence received a Chief Constable’s Commendation for their actions in trying to save a man’s life.

On the night Saturday 18 July 2020, the two officers were on external patrol, when they were flagged down by a member of the public who reported a collision further down the road they were traveling on.

They arrived on scene to find a vehicle in the carriage way with an unresponsive man locked inside, the engine was running and the vehicle still moving. Quickly evaluating the situation as unsafe, Sgt Ellis forced entry to the vehicle by smashing a window, put the vehicle in park, switched off the engine and unlocked the driver’s door. It was quickly established that the man was not breathing so CPR was commenced immediately by PC Clemence, and then the member of the public ( who was a local GP) while Sgt Ellis used his first aid training to set up the defibrillator from the CNC medic equipment bag. While the defibrillator was assessing the patient, PC Clemence continued to administer initial lifesaving first aid while Sgt Ellis prepared further equipment to assist in the treatment of the patient.

Sgt Ellis and PC Clemence continued to administer lifesaving first aid by either chest compressions or rescue breaths via the bag valve mask until Suffolk Fire Service arrived and were able to take over the care of the patient, who was eventually air lifted to hospital.

There is no doubt that the decisive decisions and professional actions of both officers gave the patient the best chance of surviving the cardiac arrest. Unfortunately, despite their efforts the gentleman involved in the incident passed away in hospital in the days afterwards.

Sgt Featherstone joined UKAEAC on 24 July 2000, leaving his career as a carpenter. After completing his initial training at Summergrove, he was deployed to Sellafield where he spent four years on B-section, in which time he was chosen to represent the UKAEAC at a shooting competition in Albuquerque, America. He didn’t win anything, apparently due to a dodgy rifle!

Steve then transferred to the then newly formed Tactical Response Group (TRG) and spent a year travelling around the sites now protected by the CNC, building a rapport with security and getting to know the sites.
After a year on TRG Steve transferred permanently to Sizewell on 16 September 2005 and as one of the more senior officers Steve had an important role in setting up what we now know as Sizewell OPU.

Promoted to sergeant on 1 April 2007, Steve has served the unit and its officers tirelessly over the past 15 years and has seen many people come and go, as well as a lot of ups and downs. Known as ‘Mr Sizewell’ Steve has undertaken many roles at the unit including Temporary Inspector and Support Sergeant, been involved in numerous projects and witnessed many changes.

Chief Constable Simon Chesterman said: “It was an honour to recognise the professionalism of these three officers and to thank them for their dedication and hard work. Sgt Ellis and PC Clemence did their absolute best to try and save a man’s life and their actions meant he was able to get to hospital and receive treatment, and his family was able to see him before he sadly passed away.

“Sgt Featherstone has clearly made a real impact on those he has worked with over the last two decades and was described by his OUC as always being a pleasure to work with and have around the station. I wish Steve well and thank him for his professionalism and dedicated public service.”

Law Face to face assessments start again at the CNC
0
✖