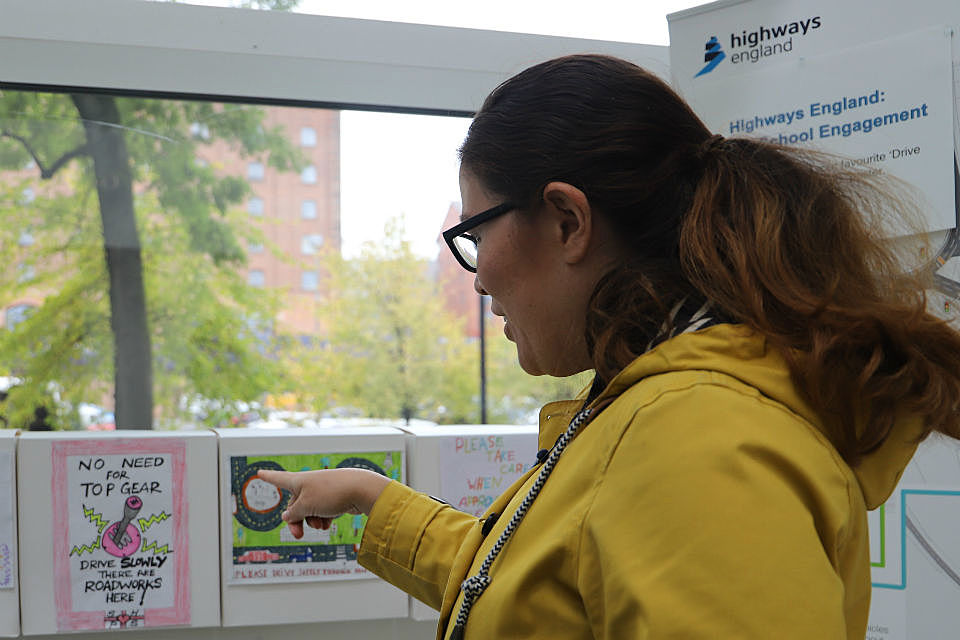 Highways England is improving Norcross roundabout along the A585 in Lancashire. It had already enlisted ten local primary schools to design the safety signs before a spate of driving-through-roadworks incidents at the site. Similar incidents had also occurred at another congestion relief project at junction 3 of the M55.

The winners of the poster competition have now been unveiled with Stanah and Sacred Heart primary schools, both in Thornton-Cleveleys, scooping the two prizes – a chance to visit the site and see full-size versions of their signs on display next week.

More than 200 Highways England staff – many of them roadworkers – from across the North West voted for their favourite designs. There were two themes in the competition with Stanah winning the ‘Please drive safely’ competition and Sacred Heart the other with its ‘Thank you for driving safely’ design.

All ten of the schools taking part in the competition have been rewarded with vouchers, construction-themed goody bags for the children and have also taken delivery of full-size versions of their entries. The competition was sponsored by construction firm Carnell which is the lead contractor on the Norcross roundabout project.

It’s fair to say we got a brilliant response from children at every one of the ten schools involved and who would win the competition was anyone’s guess as the entries were all fantastic.

The competition was very timely as we did have issues at the beginning of the project with a small minority of drivers cutting through roadworks and jumping temporary traffic lights with little regard for their own or our road workers’ safety.

Highways England’s Lucy Gurney, who organised the competition in partnership with Carnell, said:

The competition was designed to help promote safer driving generally but especially around road workers. Getting local school children involved enabled the message to be taken home to families and friends – some of the schools set the competition as homework – and helps encourage a generation of future drivers to think ‘safety first’.

The competition was linked to the schools’ Key Stage 2 curriculum work.

We are delighted that one of our pupils has won the competition. The prize money will enable us to buy some new play equipment for our children to use at break times.

A visit to the site is exciting for our children as they will learn how the new road has been planned and constructed. They will also have opportunity to discuss the roles and responsibilities of staff on the site. It will help enrich their Summer term topic on our locality and its development.

The Norcross project has had a dedicated safety van on site to record incidents of drivers breaching roadworks. In response to the incidents, Highways England adjusted its construction plans and closed access off the A585 during overnight work.