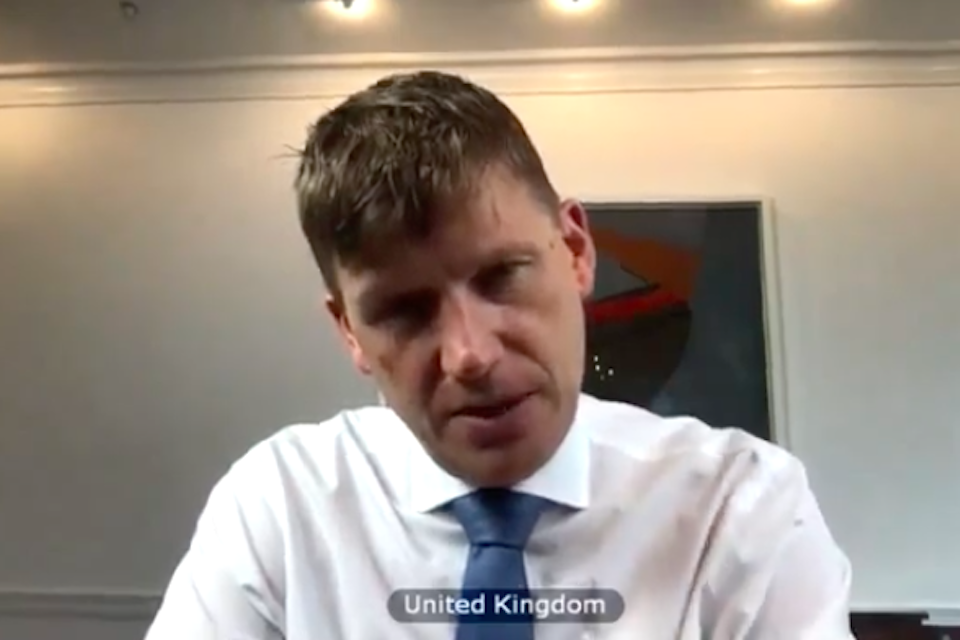 Thank you very much, Mr President. Congratulations on your presidency for the month of September.

Can I also please begin by thanking Acting Special Representative of the Secretary-General Williams for her briefing and for all the work that UNSMIL do. Stephanie, you have just delivered a powerful and compelling statement about the situation in Libya. You set out, I’m afraid, a bleak picture with few glimmers of light. But I want to thank you, Stephanie, for your honesty and also for your service to the people of Libya and to the United Nations.

The humanitarian backdrop is particularly concerning, as is the rise in Covid-19 cases. The people of Libya have had enough, as we have seen demonstrated again in recent days.

But, Mr President, let us try to pick up on one of the glimmers of light in Stephanie’s statement. The United Kingdom welcomes the statements of the 21st of August by the President of the Presidency Council Fayez al-Sarraj and the Speaker of the House of Representatives Aguila Saleh calling for a ceasefire. The Libyan people have been clear about their desire for peace. And as the events since April 2019 have demonstrated, there is no military solution. These announcements mark a significant step on the road towards sustained peace, security and stability. We commend both sides for their commitment to the political process and thank UNSMIL for its leadership in engaging with and facilitating dialogue between Libyan parties.

Mr President, these statements alone are not enough. This opportunity must be seized by all involved in the conflict and the Libyan people to make progress in achieving sustainable peace. So now is the time for restraint from those on all sides of the conflict and for all Libyan parties to take their cue from these statements and engage constructively to implement them.

And, Mr President, we need a reinvigorated UNSMIL, able to take forward this and any other opportunities.

Let me say at this point that we are concerned by the rapidly shrinking space for Libyan women to voice their opinions and participate in political life and post-conflict reconstruction, with some women subjected to physical threats and attacks apparently linked to their public roles. In the 20th anniversary year of UNSCR 1325, we welcome the Acting Special Representative’s commitment to the full and effective participation of women in political and public life, including all political processes and peace building initiatives. Remember, colleagues, this is about not only what is right to do, it’s about what is effective.

Mr President, I said that the international community, including members of this Council, were not honouring commitments freely entered into or observing the obligations laid down by this Council. International backers must commit to the departure from Libya of all foreign forces and mercenaries, and must provide the Libyan parties with the space and support needed to achieve a ceasefire, engage meaningfully in the UN led political process and secure an inclusive political agreement which places the people of Libya at its centre.

We welcome the continued engagement by the parties in the UN-led 5+5 dialogue, which the United Kingdom supports as co-chair of the Security Working Group. And we urge the parties to have the courage to make the compromises needed.

We fully support UNSMIL’s efforts to de-escalate the situation around Sirte. A demilitarised solution in Sirte could serve as a foundation for a broader ceasefire, but we remain highly concerned by the ongoing conflict, fuelled by reckless international intervention and violations of the arms embargo through the arming and supplying of the parties and the activities of the Wagner Group and other foreign mercenaries. We support the work of the Panel of Experts fully and call for the external backers of the parties to comply with the embargo and the commitments they made at the Berlin Conference. And that applies to all external backers.

Mr President, we are troubled by the ongoing impact of the conflict on human rights and humanitarian issues exacerbated by the worsening Covid-19 situation, as set out by Stephanie. The increase in civilian casualties, documented by UNSMIL from April to June, is unacceptable, as are the continued attacks on medical facilities, ambulances and medical personnel and attacks on schools. We reiterate our concern at casualties resulting from mines, booby traps and improvised explosive devices left by withdrawing forces aligned with the LNA. We continue to call for the mass grave sites at Tarhunah to be secured until a proper investigation can be conducted. We reiterate our condemnation of all human rights violations and abuses and violations of international humanitarian law, including indiscriminate attacks; unlawful killings; sexual and gender-based violence; the silencing of journalists, activists and human rights defenders; and the mistreatment of vulnerable people, including, in particular, migrants. We’re concerned by reports that civilians were fired upon and abducted during recent protests. It is vital that the right to peaceful assembly, protest and freedom of expression are upheld. And we welcome the appointment of the members of the International Fact Finding Mission for Libya to investigate human rights violations and abuses, and reiterate our calls on all parties to allow the mission access across the whole country.

We support the calls to resume oil production in the recent statements from the GNA and House of Representatives. We welcome the independent audit of the two Central Bank branches as a vital step towards improved transparency and reunification. The oil blockade only serves to harm the Libyan people. We must move forward with resuming production in the interests of all Libyans and the Libyan economy.

Mr President, I want to echo Acting SRSG Williams’ concluding remarks. There is no military solution in Libya. Those who deliberately undermined the peace process in April 2019 thought that a military campaign could work. Fifteen months later it has been proved again and again and again that it cannot. All that has been achieved in the meantime is death and misery amid a huge increase in weaponry into Libya. So let me once again urge the Libyan parties and their international backers to listen to the cries of the Libyan people for peace and to put the interests of the Libyan people above their own narrow, selfish interests. Let all commit to a lasting ceasefire and let us empower a strong UNSMIL to take forward negotiations on peace and lasting security.

Committing to a lasting ceasefire in Libya