Community groups in the North can now submit their plans and ideas on how an old Pacer carriage could be converted into a vibrant public asset, as the Department for Transport (DfT) officially launches its Pacer competition today at Bolton Station (11 July 2019).

School children from St. Catherine’s Primary School in Bolton were among the first to pitch their ideas to Rail Minister Andrew Jones, as they drew up their ideas for how the Pacers could be useful in the future. Freya, 9, showed the minister her idea for the ‘time traveller train’, a museum and classroom where people could learn about the history of Bolton. Millie, 9, suggested using an old carriage for a kitchen and pizza stand, while Lauren, 9, wanted to convert a pacer into a greenhouse to grow vegetables. 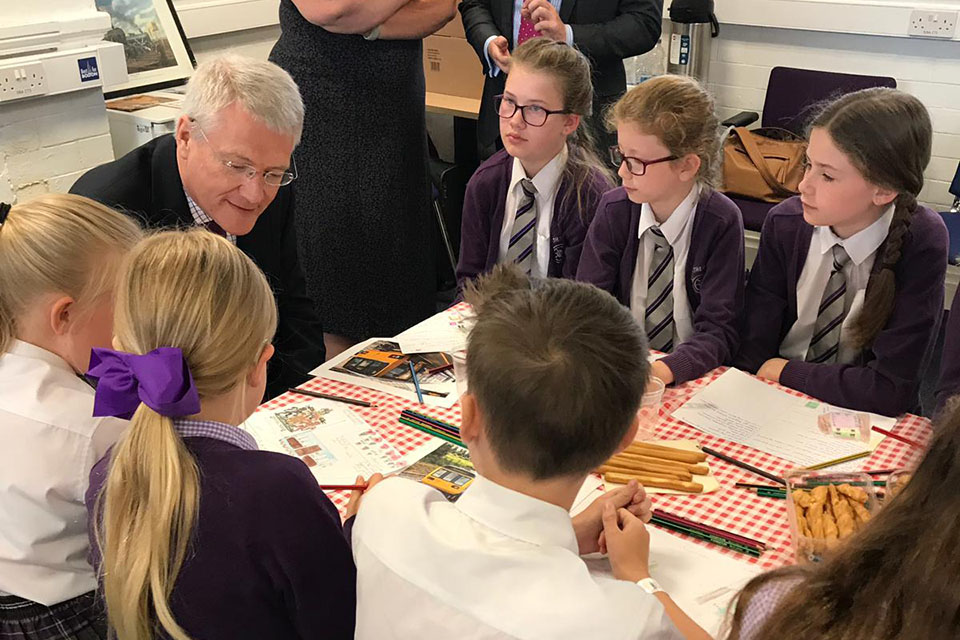 After more than 3 decades of passenger service, Pacers are being retired from the rail network. New and entirely refurbished trains are now running right across the Northern network, serving Doncaster, Liverpool, Preston, Manchester, Cumbria and Harrogate.

Rolling stock company Porterbrook is supporting the competition by making 3 Pacer carriages available to be converted to serve communities in a new way off the rail network.

DfT is encouraging community groups to submit creative and innovative ideas for converting these carriages over the summer. The competition will run until the end of September and a judging panel, including heritage rail entrepreneur Pete Waterman, will pick the winners. The winners will be announced later this year.

The energy and ideas shown by the children today has been really creative and fun, providing some brilliant examples of how the Pacers could play a new, exciting role in our communities.

The Pacer trains have been carrying passengers for over thirty years, but they have outstayed their welcome and are being replaced by modern trains and extra services, creating space for thousands more passengers.

This competition is now open for ideas, and I look forward seeing a host of exciting proposals to provide them with a new home off the tracks.

This competition provides a fantastic opportunity for community groups to actively engage with the rail network to make a difference to their local areas.

I’m delighted to be chairing the judging panel to oversee the proposals put forward ensuring they are realistic, credible and provide a real benefit to wider northern communities

Porterbrook is delighted to be able to support the DfT’s innovative project to find a new, community based, role for 3 of our Pacer vehicles. It is fitting that this competition will seek to identify new ways in which these Pacer vehicles can continue meeting the needs of the communities they once served”.

We are delighted that Bolton station has been chosen to launch this exciting competition to find new uses for the ‘Pacer’ trains, which have been the mainstay of local rail services in our area for decades.

I can’t say that we’re not glad to see them going – we now have fast trains with more capacity and greater comfort. It’s a great idea to re-use the old trains for community projects and I hope this event will stimulate lots of groups to come forward with innovative ideas.

More than 100 new trains will be rolled out by Northern from this year, together with new trains on the TransPennine Express network as well, offering more comfortable seats and improved accessibility. This follows LNER’s recent introduction of the brand new Azuma fleet on the East Coast Main Line.

It comes as part of a significant investment by both government, Network Rail and train operators to transform the national rail network, delivering more than 4,500 new carriages to UK passengers by the end of 2022.

Making the north one of the best-connected regions in the UK is at the heart of the government’s ambition for a thriving Northern Powerhouse.

The Department for Transport is investing £13 billion through to 2020 to transform transport across the region and is focussed on supercharging transport connections for years through our support for HS2 and Northern Powerhouse Rail.

Between 2019 and 2024, the government will also invest around £3 billion further in upgrading the Transpennine route between Manchester, Leeds and York to deliver faster, more frequent and more reliable journeys with more seats.