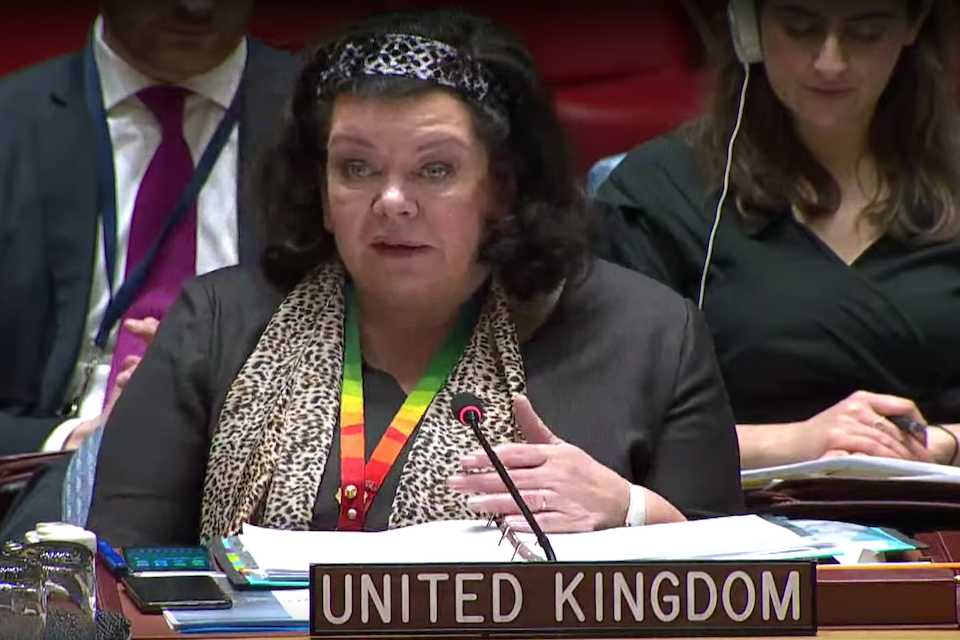 Thank you very much, Mr President, and thank you for scheduling this important debate today. And thank you, Prime Minister, for taking time to come here. I think it’s very important that the Security Council can hear from the OSCE. And congratulations on your Chairmanship in office, and you have the United Kingdom’s support.

The OSCE is a very key pillar of the rules-based international system by the UN itself. And it’s a crucial institution for European and Euro-Atlantic security. And as you’ve highlighted, Prime Minister, it’s important in discharging that responsibility that the OSCE can make a real difference on the ground. And as other speakers have noted, the people of Ukraine feel this need particularly acutely.

Your recent visit to Ukraine is very welcome. And you had the opportunity to witness at first hand the reality for people living near the line of contact. We believe that you are correct to prioritise the OSCE’s response to the conflict in Eastern Ukraine. The United Kingdom supports the push for full, safe and unimpeded access for the Special Monitoring Mission, as well as adequate resources ensuring that it’s able to fulfill its mandate.

As other speakers have noted, we, too, are deeply concerned by the deterioration of human rights in Crimea since the illegal annexation, including arrests; ill treatment; torture and intimidation against political opponents and minorities; and the denial of basic human rights and religious freedoms to those who don’t accept the forced imposition of Russian legislation and citizenship on the peninsula. Therefore, the United Kingdom urgently calls on Russia immediately to release the 89 or more political prisoners currently detained in Russia and in Crimea.

We welcome President Zelensky’s commitment to finding a diplomatic solution to the conflict in eastern Ukraine. Ukraine’s recent delivery of confidence building measures led to the December Normandy Format Summit in Paris and the further prisoner exchange. We look to Russia to abide by the Minsk agreement commitments it signed up to and to use ther influence to ensure the separatists did the same. We call on Russia also to play its part to enable further disengagement and full access by the International Committee of the Red Cross to Non-Government Controlled Areas.

Mr President, Russia needs to fully respect Ukraine’s independence and territorial integrity, withdraw its forces from all of Ukraine, and end its illegal annexation of Crimea and Sevastapol. Crimea and the Donbas are part of Ukraine. What Russia has done and continues to do there breaches her obligations under international law and presents a serious challenge the international rules-based order.

Prime Minister, we welcome your chairmanship’s prioritisation of conflict resolution, including the work of the Special Monitoring Mission and the Trilateral Contact Group, as well as the resolution of the other protracted conflicts in the OSCE. And, like others, we attach great importance to the work of the OSCE field presences across the region. United Kingdom has the honour to support your chairmanship by chairing the Security Committeeship of the OSCE. We are very grateful for your determination to tackle organised crime and underline the importance of ensuring this action is taken in compliance with international human rights standards.

The OSCE’s cooperation with the UN on countering terrorism and violent extremism is particularly strong, and we welcome the OSCE partnership with the Security Council’s counter-terrorism bodies, and look forward to the OSCE joint forthcoming conference with UNOCT in Switzerland on foreign terrorist fighters.

Mr President, the unique value of the OSCE lies in the consensus approach to principles and verifiable commitments, allowing for mutual benefits and the prevention of miscalculation or escalation. In particular, the United Kingdom would like to see the preservation and enhanced delivery of existing confidence and security building mechanisms in 2020, including the Open Skies Treaty and the Vienna document.

Prime Minister, we commend your focus on the 20th anniversary of UNSCR 1325 and the promotion of the role of women in peace and security. Preventing sexual violence in conflict also remains a top priority for my government. We are very proud, Prime Minister to give you our full support for your chairmanship of the OSCE.

Concern for the deterioration of human rights in Crimea

International Affairs Stressing the imperative of a lasting ceasefire in…