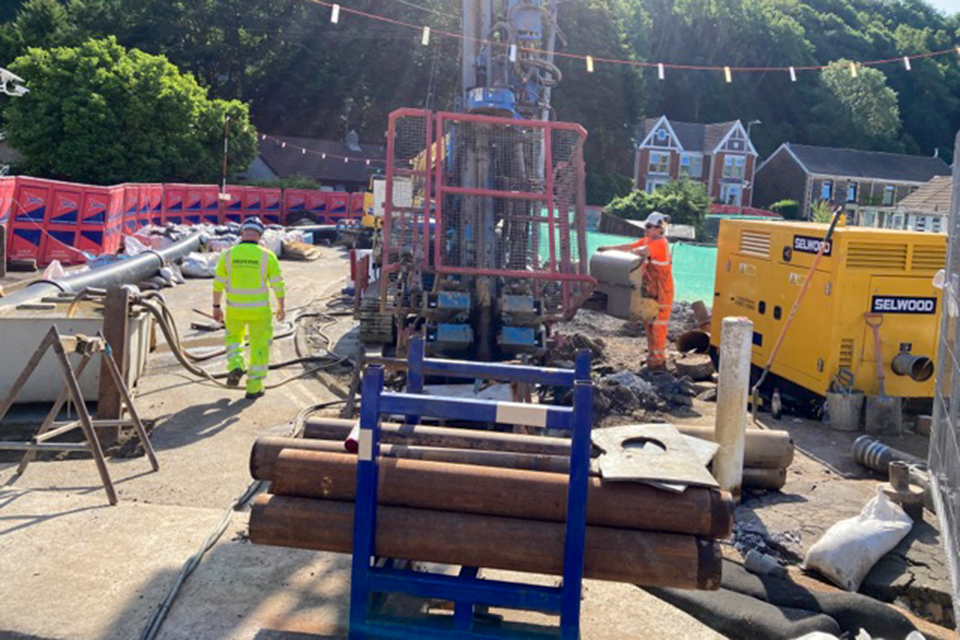 Following detailed ground investigation and design work, The Coal Authority has begun construction of a new mine water management scheme at Skewen in Wales.

The project will provide a new, permanent route for water from nearby mine workings and ensure any excess mine water from prolonged rainfall is collected by the scheme, keeping properties safe. It will comprise of new boreholes and a concrete capture structure to collect and route the mine water into a new culvert.

The system, including real time telemetry monitoring, was designed in consultation with residents and partner organisations including Neath Port Talbot Council and Natural Resources Wales.

Coal Authority investigations recently concluded that extensive, additional engineering is needed to stabilise the ground around the blowout to provide the necessary foundations for the new pipe work and mine water capture structure, because of unique geology discovered on site. Additionally, gas, electricity, water and telephone utilities have all had to be relocated by the relevant utility providers.

As a result of the additional works required, the permanent scheme at the junction of Goshen Park is now expected to be completed by the end of the year.

While construction is underway, residents continue to be protected through measures put in place by the Coal Authority following the flood in January. Its teams remain on site daily and water levels in the mine system are continually monitored in real time. In addition, a high-capacity water pump remains on standby for use by the Coal Authority as an extra safeguard.

Since January, the Coal Authority has also completed a clean-up operation, repaired drainage systems and offered residents like-for-like reinstatement of damaged gardens and outside areas up to £2,000 on a goodwill basis.

Speaking from the site in Skewen, Lisa Pinney, the Coal Authority’s Chief Executive, said: “The flooding earlier this year has had a significant impact on the community and our hearts remain with those affected.

“We can reassure the community that the risk of a similar incident is incredibly low as a result of the measures we’ve put in place since January, including monitoring water levels around the clock. While the new mine water management system will take longer than expected to build as a result of the geology found on site, it will provide an effective and permanent solution when completed.

“We are sorry for the ongoing disruption to residents caused by the road closure and are working hard to enable Neath Port Talbot Council to reopen the road as soon as it is safe to do so.

“Our dedicated 0800 2884 268 helpline remains open to help Skewen residents with any queries they have.”