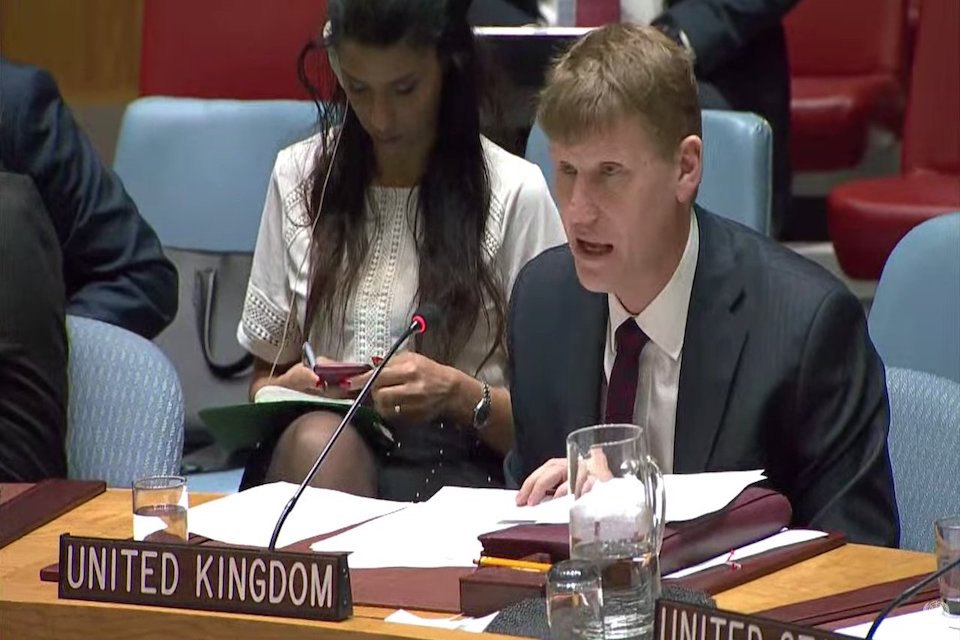 Thank you, Mr President, and thank you for organising this meeting on this extremely important topic, and we very much welcome the PRST adopted today. We’re pleased in particular that it recognises the importance of a holistic approach; regional strategies and action plans, as well as the importance of human rights; the use of sexual violence as a tactic of terrorism and tackling that, and the importance of building inclusive and meaningful partnerships to counter-terrorism to bring perpetrators to justice and prevent violent extremism. It is relevant not only to Africa, but, of course, beyond. Thank you also to our briefers for their very rich and informative presentations.

Mr President, as we’ve heard previously in this chamber, the terrorist threat in Africa is rapidly evolving and the threat of foreign terrorist fighters and returnees highlights the risks posed by Daesh and Al-Qaeda affiliates, including groups in Mali, Niger and Burkina Faso, amongst others. And we’re very pleased that the United Nations has listed ISIL in West Africa province and ISIL in the Greater Sahara under 1267 sanctions regime.

But we also know, Mr President, that the threat of terrorism doesn’t follow boundaries. The United Kingdom, therefore, stresses the value of international and regional cooperation to identify threats, strengthen responses and ensure that these align with international norms and standards. Having the right mechanisms and partnerships in place is key to ensuring that we can exchange information about plots and ensure that the perpetrators can be arrested, investigated and prosecuted in accordance with national and international legal obligations.

Too often, Mr President, information sharing, even within government, is inadequate, let alone between countries. But there is a simple equation: the greater the information sharing and cooperation, the worse terrorists do. I’m afraid the inverse is also true. Relations between countries can be complex but terrorism should always be a common cause.

Now, Mr President, this Council has developed a robust counter-terrorism framework. Member states must continue to implement relevant resolutions, and we stress the important role of CTED in working with states to strengthen compliance with CT obligations and identify technical assistant needs and encourage OCT, UNDP and others to follow up on CTED’s recommendations and help member states to strengthen their capacities. We believe the United Nations should continue to work to enhance capacity-building efforts in Africa, which also, of course, complements bilateral support by members of the Council and other member states of the United Nations.

And for our part, Mr President, the United Kingdom supports counter-terrorism capacity-building projects through bilateral programmes in countries throughout Africa, which tackle different dimensions of counter-terrorism and prevention of violent extremism, including through development, police, military and other security cooperation.

And a few examples, if I might: in East Africa, we’ve been working with UNODC to construct detention facilities in Somalia in line with international standards, while in Kenya we are collaborating to strengthen crisis response and crime scene management.

In West Africa, we’re working with prosecutors in Nigeria on counter-terrorism cases at the pre-trial stage with the aim of a higher conviction rate and have collaborated on aviation security. I would say, if I may, as well, as the Foreign Office’s National Security Director, I took control of the government’s response to the attacks in Tunis and in Sus, where over 30 British nationals were killed. And we have worked tirelessly since with our Tunisian friends to build capacity and support their – and I stress the word “their” – security priorities. Elsewhere, we’re also working with local law enforcement and criminal justice officials across different African countries to build robust cases based on evidence to process those terrorist cases through the court system to hopefully conviction and imprisonment and developing rule of law based operational responses.

Now, Mr President, as highlighted by the PRST we’ve adopted today, tackling terrorism is not simply a matter of security. Of course, security is vital and it is in all our countries primarily a proportionate security response to stopping attacks and arresting known terrorists, which is vital. But it is not of itself sufficient. An issue we face in many countries is the provision of essential services by terrorist groups in particular areas. So our approach must be security led, but with the provision of services and ensuring a positive impact on communities.

And what about those, Mr President, whom our security forces have not been able to individually identify as terrorists or conducting terrorist attacks? This is where the prevention agenda comes in – preventing people from becoming or supporting terrorists or violent extremists. And I want to stress here Rosemary DiCarlo’s point: there cannot be a “one size fits all” solution. Prevention needs to be, above all, a local endeavour, taking account of local factors, developed with local communities and local authorities. What works in London will not necessarily work in Manchester. What’s needed in Eastley will not necessarily be what’s needed in Mumbasa.

I talked earlier about counter-terrorism being common cause even when relations between difficult countries are difficult, and I can say as the Foreign Office’s National Security Director, I also had the honour to visit Moscow and I regularly discuss this issue with my Russian colleagues. I feel it is important to keep dialogue open and work together on counter-terrorism issues. We have enough arguments with our Russian friends here and I don’t see any need to on this issue. So I’m not going to respond to the Russian representative’s political points. But I do want to say that when I listened to the concerns he expressed, I want to reassure our Russian friends that prevention of violent extremism can never be an externally driven approach. It can only work in cooperation with states, whether at national level or local level. And it’s not a dichotomy between the two; state involvement, community involvement, civil society involvement, none of these things should be thought of as exclusive. I hope that provides some reassurance, Mr President, of the UK’s view and the approach we’re trying to take.

Let me draw an end by saying that the nature of the threat today calls for not just the whole of government, but also a whole of society approach based on strong partnerships between governments, communities and international and regional actors. But we know also that measures which infringe on human rights and put citizens at odds with their own government can exacerbate tensions and fuel radicalisation and recruitment by terrorist groups.

And of course, while states have legitimate concerns about terrorism, we must stress that all responses must be proportionate. And as we so often reiterate in our Council’s resolutions, these measures must not foster association between terrorism, any religion, nationality and civilisation or ethnic group. This is not just what is the right thing to do; it is the most effective approach. Mass stigmatisation or repression of a minority or a religion is likely only to fuel grievances and create a narrative that can further radicalise individuals locally and globally.

Mr. President, let me conclude by saying the threat picture is changing in Africa and terrorists everywhere continue to adapt their techniques and operations. We see a fast, evolving situation on the continent where violent extremism is spreading outside of terrorist-affected countries and incipient groups forming in new locations. This will have major long-term implications not just for the continent, but also for security and prosperity more widely. The United Kingdom stands by our African partners and friends in this fight. It is one which we must win.

Countering Terrorism and Extremism in Africa