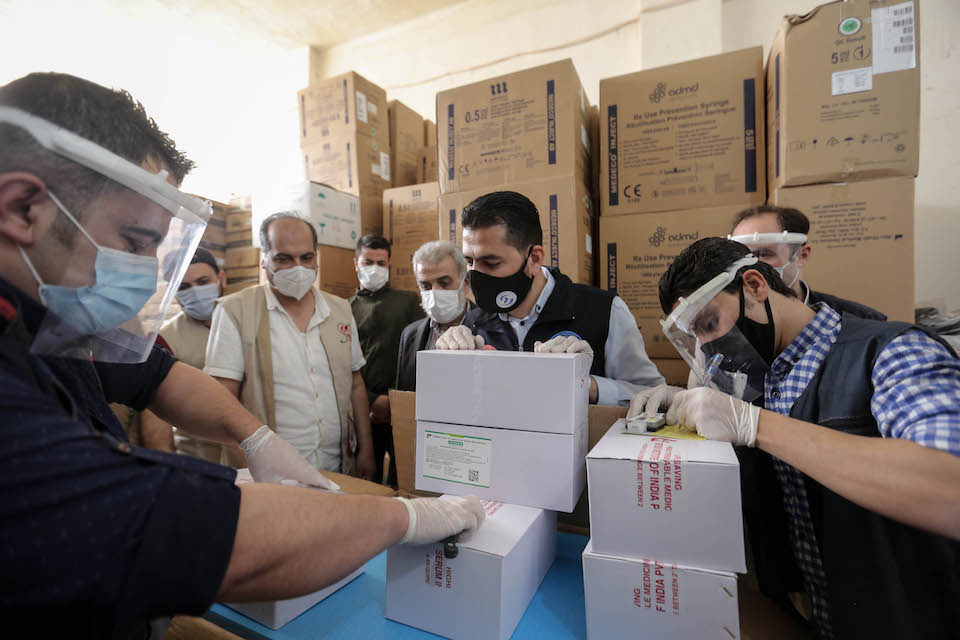 Thank you, Mr President, and to our UN briefers, USG Lowcock and Special Envoy Pedersen.

I would like to start by focussing on the humanitarian situation in Syria.

In February, the Security Council unanimously adopted and co-sponsored resolution 2565 on global distribution of the COVID-19 vaccine in conflict situations.

We agreed on the importance of bringing the Security Council’s full weight to bear on ending this appalling pandemic.

We recognised the vital need for equitable access to COVID19 vaccines.

And we all acknowledged the negative impact that any impediments, including on logistics, supply and administration, could have on efforts to ensure that all people, no matter where they live, have access to the vaccine.

With resolution 2565 in mind, the UK welcomes the first delivery to Syria of over 250,000 doses of the COVID-19 vaccine via the COVAX facility last week. This is a small, but important step towards realising the ambition of 2565 across Syria.

Having pledged over $700 million in support, the UK has played a leading role in setting up the COVAX facility – it is a vital tool towards ensuring the equitable access we all called for just two months ago.

As we have heard today, vaccines arrived in North West Syria via the mandated border crossing at Bab al-Hawa last week. They will provide a vital lifeline to health workers on the frontline.

So we express our utmost concern at the predicted disruption, as outlined in the Secretary General’s latest report and by USG Lowcock today, to future vaccine deliveries in North West Syria should this Council fail to renew the Bab al-Hawa mandate.

Such a failure would impede the global fight against COVID19 and contradict this Council’s own ambition, as set out in 2565.

The UN has told us what it needs: a cross border response for 12 more months.

The UK welcomes the UN’s continued efforts to establish access into the North West inside Syria – but we need to heed the Secretary General’s warnings: even if deployed regularly, cross-line convoys cannot replicate the size and scope of the cross-border operation.

The experience in Yaroubiyah, where needs and supply shortages have risen since the border crossing was closed last year, has demonstrated the importance of an ‘all modalities’ approach driven by humanitarian needs on the ground.

It is clear that this Council must heed the calls of Syrian people and humanitarians on the ground: the provision cross-border aid commensurate with humanitarian needs.

Turning to the political track, we welcome the Special Envoy’s ongoing efforts to facilitate a sustainable resolution to the conflict.

We re-emphasise that full implementation of resolution 2254 is the only path to a sustainable solution to the crisis in Syria.

The core of that UN-facilitated Syrian-led process is the establishment of a new constitution, followed by free and fair elections, administered under supervision of the UN, pursuant to this new constitution. This sequence was deliberate, and designed to find an inclusive way forward for Syria based on dialogue and cooperation between Syrians.

Holding presidential elections at the end of May under the previous constitution runs counter to this process and, at a time when the Special Envoy is attempting to convene a sixth round of Constitutional Committee talks, risks destabilising his efforts.

Furthermore, elections that take place in the absence of a safe and neutral environment, in an ongoing climate of fear, when millions of Syrians depend on humanitarian aid, are displaced or living as refugees and are prevented from voting and running for the office, do not confer political legitimacy, but instead demonstrate disregard for the Syrian people.

Instead of prioritising vanity elections, the regime should focus on actively and genuinely participating in the implementation of resolution 2254.

OSCE group of friends on safety of journalists: joint statement

OSCE Representative on Freedom of the Media: UK response

International Affairs Change of Her Majesty’s Ambassador to France: Me…