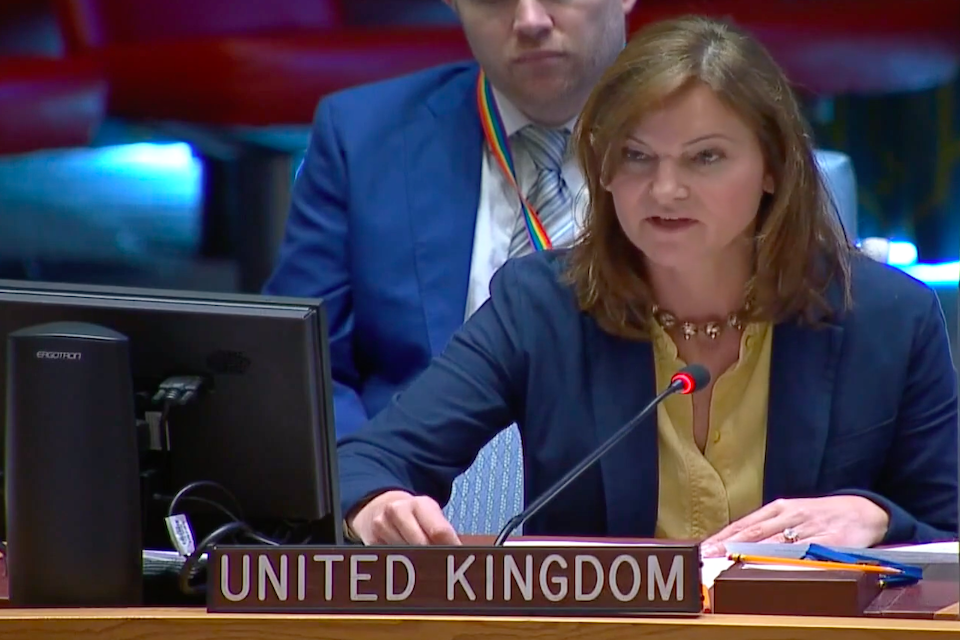 Thank you President.  I would like to thank SRSG Haysom, Ms Mudawi and Ms Merekaje for their helpful briefings. We very much welcome South Sudan participating in the meeting today.

Today I will focus my intervention on the humanitarian and human rights situations, as well as implementation of the peace agreement.

The humanitarian situation that OCHA outlined is alarming, with 8.9 million people now in need of assistance and almost two-thirds of the population facing crisis or worse levels of food insecurity.

We urge the Government of South Sudan to reduce the physical and bureaucratic obstructions and meet its obligations under the peace agreement to allow unhindered humanitarian access.

The human rights situation also continues to be of concern, evidenced by harrowing reports of violence, killings and widespread sexual violence as our briefers have described today.  This includes in Leer, where over 25,000 civilians have been displaced.  We call on the Government of South Sudan to hold the perpetrators accountable.

Since the Council’s last meeting in March, the United Kingdom joins others in welcoming the recent progress made on the peace deal, including the unified command structure.  We are also encouraged by the integration of the peace agreement into the Transitional Constitution and that legislation has been presented to Parliament.

It is regrettable, however, that overall progress remains too slow and too limited and that critical benchmarks have not been met.

SRSG Haysom has rightly highlighted the scale of the challenge to deliver remaining tasks in the peace agreement on current timelines.

The South Sudanese people have already waited too long for peace.  It is clear that the Parties need to demonstrate leadership and engage in an honest discussion about priorities and timelines.

With less than one year left of the transitional period, we encourage the Government of South Sudan to set out in detail the concrete steps it needs to take in order to deliver the peace agreement, particularly on constitution-making and elections, and how UNMISS and the wider international community can support.

We also encourage the Government of South Sudan to make full use of available UN support.  In that regard we look forward to the first meeting of the Peacebuilding Commission on South Sudan in the near future.

In closing, President, the United Kingdom reiterates its calls on South Sudan’s leaders to demonstrate to the world that they understand the severity of the plight of their people; to take responsibility and act in partnership with donor communities and the UN to solve the crisis.