Crowds gathered to watch Highways England and the emergency services act out ‘incident responses’ on the newly-created road which has now been handed over to Oakham Rugby Club.

Ten-year-old pupils Lilly Gerstner and Sophia Rice created winning posters to net the prize for their school and gift vouchers for themselves.

Local schools were visited by experts from East Midlands Asset Delivery (EMAD) – which is made up of Highways England and 22 partners including nmcn and Kier – in the run-up to the show.

Pupils between the ages of eight and 11 were helped to plan, design and build their own road bridges as well as learning about the work that Highways England does.

They were invited to design a poster reflecting that work with some of the best examples displayed in the Highways England marquee at the show on Sunday (2 June) where the winner was announced.

As well as the demonstrations, Highways England hosted a range of displays and activities at the Rutland County Show, one of the oldest events of its kind in the country.

Visitors were able to see up close, and even sit inside, a number of Highways England’s vehicles ranging from the huge gritters and construction machinery to safety and traffic officers’ vehicles, as well as getting to chat to traffic officers.

On display in the marquee were exhibitions covering the work of Highways England, details of careers in the business and a focus on some of the safety campaigns now running.

A centrepiece was the environmental stand with wildlife and small creatures to interact with. There were also lots of activities for children including a treasure hunt and the chance to operate one of our robots used for line painting.

Visitors were full of praise for the Highways England displays, recording such comments as:

“It was our favourite bit of the whole show, spent two hours here.”

“It was all very interesting. I was surprised at how much goes into maintaining the road network.” 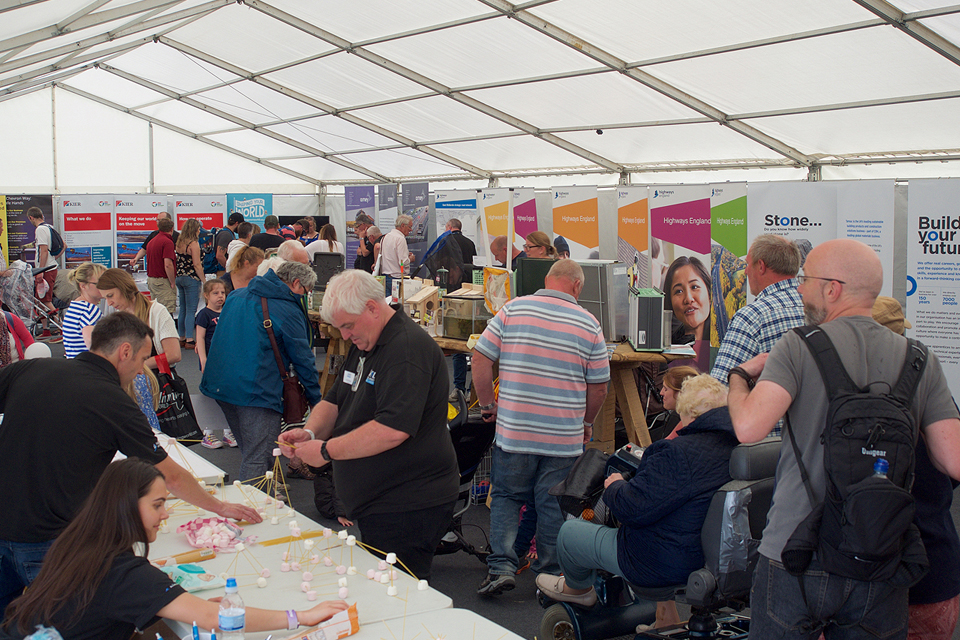 Learning about the work of Highways England inside the show marquee

We had an incredible response and some lovely feedback from the crowds of people who came along to see exactly what Highways England does.

The marquee was busy all day with families and visitors learning about our varied role and responsibilities as well as taking on board our important safety messages.

It was a privilege to be part of the show and we wanted to give something back to the community. We are delighted that the demonstration road will provide the rugby club with some welcome car park spaces.

We would also like to thank all the children who took part in our poster competition, there were some fantastic entries and I look forward to finding out what tasks English Martyrs Catholic Voluntary Academy have lined up for our team.

It was a great privilege to be able to host EMAD at the Rutland Show. They added an exciting new dynamic to the event. I think few of us realise how complex it is to manage the repair and maintenance of our highways.

Thank you very much for all your help and support and leaving us with a brilliant legacy of an additional car park.

We are thrilled to have won the competition set up by Highways England. All the children found the workshop interesting and informative, making them want to become engineers of the future.

We would definitely like to invite the team back in again to our school.

Transport ‘Get involved’ call as A66 consultati…