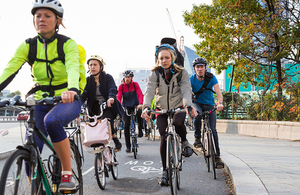 The Mayor’s Transport Strategy for London, published in March 2018, sets out a vision to create a greener and healthier London. It sets a headline target for 2041 for 80% of all journeys to be made by foot, cycling or public transport in the capital. Achieving this target will require a large increase in cycling levels and the Cycling Action Plan, published in December 2018, provides details of how this will be achieved, including significant investment in new infrastructure to expand the cycle network.

Different infrastructure approaches are used on different streets, but an overarching set of Quality Criteria ensures that all new sections of the network offer a consistently high quality. On busier streets, segregation is often used, designed to make cycling safer by keeping cyclists away from general traffic. On residential streets, measures such as traffic calming and filtering are used to reduce levels of traffic. Historically, routes have been delivered under Cycle Superhighways and Quietways brands, but these are now being are merged into a single network called Cycleways.

As of summer 2019, over 86 miles of the cycle network has been delivered during the current Mayoralty, building on previous investment in Cycle Superhighway and Quietway routes. Physical segregation on the routes is designed to improve the safety of cyclists and prevent motorists from encroaching into the cycle lane.

TfL’s monitoring shows that the segregated cycle lanes at Blackfriars Bridge are able to move 5 times as many people as the adjacent carriageway lane. After only 2 weeks of the Cycle Superhighway routes opening, 5% more people were moving across the bridge than before construction of the segregated lanes. On a sample of new routes, agreement with the proposition ‘The quality of my journey has improved since the changes’ is above 60% on all but 2 of the assessed routes.