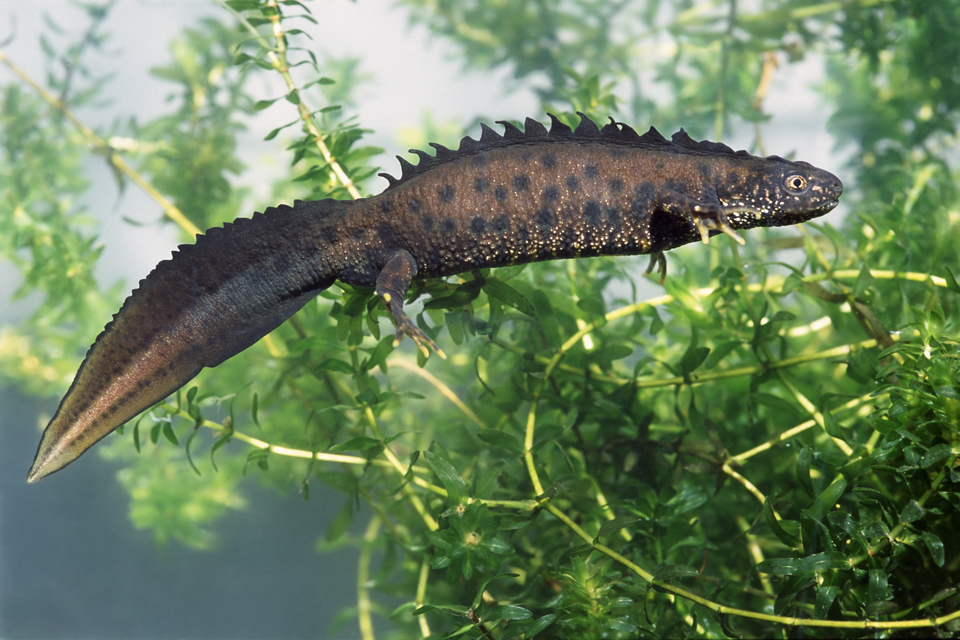 District Level Licensing is an innovative new approach to the conservation of newts developed by Natural England. Barratt Homes’ Chilmington Green Development is the very first development in Kent to join the scheme – an exciting milestone for the project.

Once complete, Chilmington Green will include over 5,500 new homes, four primary schools, land for community and leisure use, open green space, local recycling facilities, and associated utilities and infrastructure. Natural England has worked closely with developer Barratt Homes and ecological consultant Bakerwell to bring part of this development into the District Level Licensing scheme. Payment into the scheme by Barratt Homes has funded six new ponds which have been strategically placed to join up and expand existing newt habitats and help make the species population more resilient and healthy.

I’m delighted to see district level licensing happening on the ground, at a landscape scale. This exemplifies how we want to work in the future.

Here in Kent we are working with businesses such as Barratt Homes to use licensing in a positive way that helps the environment. It’s great to see them responding so quickly and enthusiastically to our innovative new scheme.

Over the last 60 years the population of Great Crested Newts (GCN) in the UK has declined dramatically which is why the species is protected under UK and EU law and it is an offence to disturb the species or pond habitat without a licence.

While 80% of the UK’s ponds are currently in a poor state, a total of 68 new ponds in Kent have now already been created and restored by landowners under the District Level Licensing scheme, doubling those available when the scheme first launched in February.

District Level Licensing is much simpler than the traditional site-based mitigation approach to licensing. It allows the impact of a development to be compensated for at a landscape or whole local authority area scale. Through the scheme, developers in Kent can make a conservation payment which will cover the upfront creation or restoration of ponds in areas away from the development.

85% of the payments from developers under this scheme goes directly towards creating, looking after and monitoring places for GCN to live, in stark contrast to the traditional approach. These areas, mapped by Natural England, represent the best places for newts to thrive and habitat created here will be maintained and monitored for 25 years.

As a result, GCN benefit from an overall increase in hunting and breeding grounds which should lead to an increase in their population over time.

We are pleased to be working in partnership with Natural England and leading wildlife organisations at Chilmington Green, to implement Kent’s first District Level Licensing agreement.

This innovative scheme could provide the housebuilding industry with an alternative offer that can both enhance ecological habitat and species protection, whilst enabling developers to rise to the government’s challenge of delivering new homes at pace.

Protecting nature and the local environment is a key priority for us and we are excited to be working at the forefront of such a pioneering scheme with Natural England.

Under District Level Licensing, survey work and habitat creation is carried out in advance of development enabling it to commence sooner. Developers gain a high degree of certainty prior to starting work as they will know in advance which areas they can and cannot build on, ultimately reducing delays and disruption to building schedules.

Following the launch of District Level Licensing this year in Kent (February) and Cheshire (March), four developers have committed to investing a collective £200,000 to reduce the ecological impacts of their developments on newts, and attracting interest from developers for very small to very large schemes.

Funds from the Ministry for Housing, Communities and Local Government, and contributions from developers in Kent, including Berkley Homes, Pentland Homes, Quinn Estates and Redrow and Barratt Homes Kent, have been used to help implement the scheme, and Natural England have worked with a range of partners that have helped to launch the schemes.