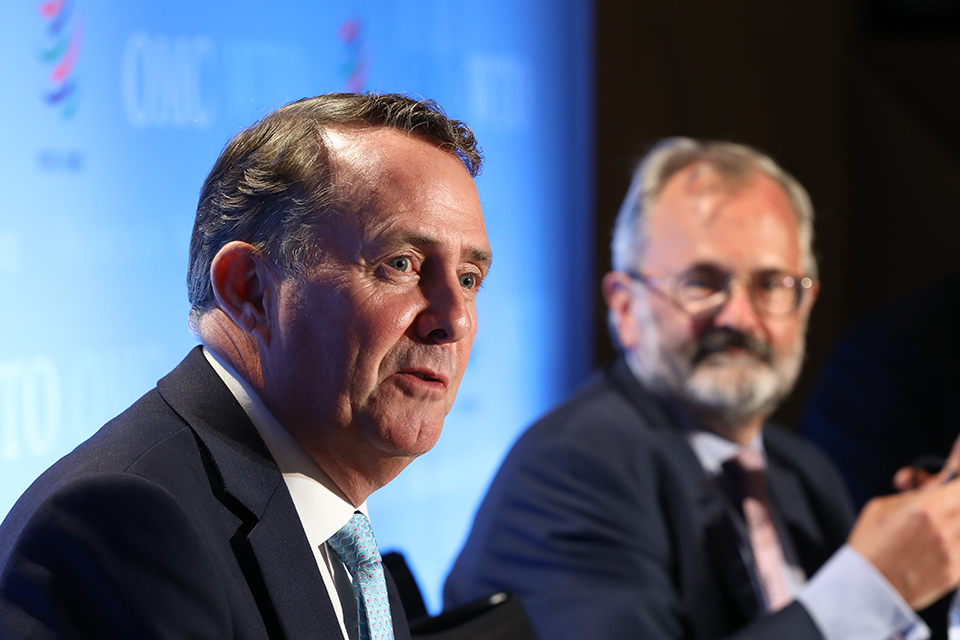 Dr Liam Fox said he has the experience and vision to revitalise the World Trade Organization (WTO) after making it through to the second round of the selection process for the next Director General (DG).

Today, three candidates, Dr Jesús Seade, Tudor Ulianovschi and Hamid Mamdouh, have withdrawn from the race. Dr Fox thanked them for such positive contributions to the debate surrounding our global trade. The next round of the process begins on Thursday 24th September.

Speaking from Geneva where Dr Fox has been meeting representatives from around the world, the former UK International Trade Secretary said:

I want this DG election to be a real choice – we need the best qualified candidate for the job with the ability to deliver what the Membership is demanding. I believe I am that candidate.

The UK Prime Minister Boris Johnson nominated Dr Fox to be a candidate to replace current Director General, Roberto Azevedo, who stepped down after seven years in charge.

Dr Fox is campaigning to restore the credibility of the WTO at the heart of the rules-based trading system, reform its Appellate Body, deliver genuine gender equality by ensuring that at least half of his top team are women and work more closely with other international organizations.

He says that from the first day of his appointment he will work to ensure the global pandemic does not lead to a rise in protectionism, and will make smaller developing countries, small businesses and ‘ensuring global trade works for everyone’ his key priorities.

Today he warned it is vital the WTO selects a leader with the right qualifications for a series of urgent challenges.

It cannot be a ‘business as usual’. The WTO was facing very significant challenges before COVID-19. Those headwinds are made all the more urgent by the pandemic.

Declining trade volumes, disagreements about the normative agenda, and most importantly, a breaking down of the multilateral consensus which enabled the WTO to be established are challenges we need to tackle head-on.

The WTO needs leadership at the top with an unswerving belief in the power of open markets to drive economic development and prosperity.

It is one of the world’s great institutions. It has tremendous technical expertise, a wealth of experience and a long institutional memory. But it lacks political momentum at a time when most of the blockages in the global trading system are political and will need to be sorted out in national capitals as well as in Geneva.

I see the role of the DG as building bridges and rebuilding trust across the world.

My time as a UK Minister in one of the world’s biggest economies with a respected development agenda allowed me to get a real sense of both opportunities and frustrations across the Membership. I am looking forward to continuing this campaign.

Coronavirus Restrictions for more areas in north west, West Yo…