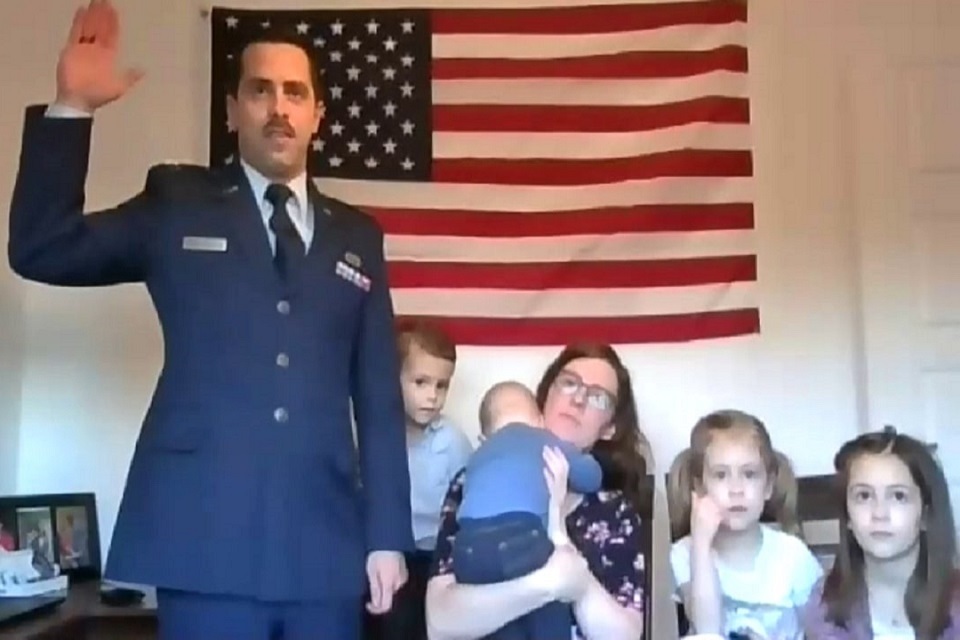 Captain Jake Singteton, a United States Air Force officer on secondment with the UK’s Defence Science and Technology Laboratory (Dstl), has been inducted into the United States Space Force (USSF).

The newest branch of the U.S. armed forces, USSF is a military service that organizes, trains, and equips space forces in order to protect U.S. and allied interests in space.

Jake has been seconded to Dstl’s Space Programme under the US “Engineer and Scientist Exchange Programme” (ESEP), which aims to promote international cooperation in military research, development, and acquisition through the exchange of defence scientists and engineers. Jake has shown exemplary leadership and dedication to supporting the goals of ESEP to cultivate international cooperative endeavours, and it was an honour to have hosted his Oath of Office ceremony in the UK.

Captain Singleton was instrumental in deepening US/UK relationships as the lead for International Space Pitch Day (ISPD). Funded by both US and UK defence departments ISPD aims to find, fund and fast-track innovation and technology, especially those from tech start-ups and small and medium-sized enterprises (SMEs), that give advantage to military personnel and operations in the space domain.

“Working within the Space Programme at Dstl has been a highlight of my professional experience in the Air Force. I am energized by the successes we have had in increasing international cooperation and am convinced that it was only possible through that US and UK partnership. I plan to bring every lesson learned and relationship that I have developed here in the UK into my career with the US Space Force as everything we do in the future becomes a collaborative and global effort. I am grateful that I had the opportunity to take this step here in England while working directly with the UK team.”

“It is an enormous privilege to attend the ceremony today as Captain Jake Singleton transitions from USAF Airman to USSF Guardian. It has been phenomenal to watch from afar how the USSF has stood up, evolved, and is taking shape as a Service in its own right. I would also like to thank Jake personally for his tremendous efforts whilst serving in the UK, proving that the special relationship between our two great nations is stronger than ever, and making us all better for the experience.”

Colonel Metrolis, who administered the Oath of Office, added:

“As a previous exchange officer, I am honored to administer the Oath of Office to Captain Singleton. His leadership, devotion to country and now renewed dedication to the United States Space Force are shining qualities of an officer I am proud to serve with.”

“Jake has made a considerable impact with Dstl as an exchange officer, notably with ISPD, which reflects our commitment to using the innovative abilities of SMEs to solve technological challenges in space. Exchange officers provide a valuable means of widening international collaboration which benefit both sides of our strategic alliance, and it is fitting Jake took his USSF Oath of Office while working alongside us at Dstl.”

In addition to ISPD, Dstl is collaborating with US and other international partners on numerous research programmes to maintain safety and security in space, and ensure the continued operation of critical space infrastructure.