Duke of York sees energy revolution in the making at Culham 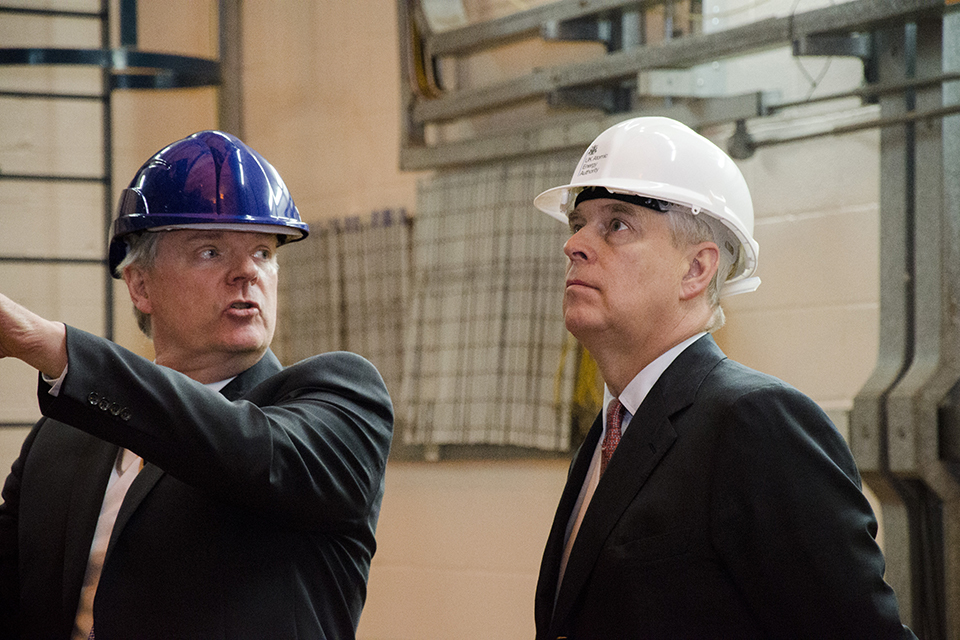 Culham is home to JET – the Joint European Torus – the world’s largest fusion experiment, which the UK Atomic Energy Authority (UKAEA) operates for scientists around Europe. The Duke of York toured JET and learned of its role in paving the way for fusion reactors which could one day provide low-carbon energy to people around the globe. He was shown round the JET facility by officials from UKAEA, EUROfusion (the consortium that manages the JET research programme) and the European Commission.

A keen advocate of UK business and innovation, The Duke also heard how the research at Culham will help hi-tech companies to win contracts on major projects on the path to delivering commercial fusion power. UKAEA is working with international partners to prepare the world’s first reactor-scale fusion experiment, ITER, scheduled to start up in France in 2025. Over €500 million of deals on ITER have already gone to British firms and a similar amount is expected in the coming years.

His Royal Highness was very interested in the potential of fusion. JET is both an important part of Britain’s hi-tech landscape, and the largest European science facility in the UK. We were delighted to show The Duke around JET and explain its vital role in international fusion research.

The Duke also met UKAEA staff, including engineering apprentices from Culham’s new Oxfordshire Advanced Skills centre, which is now training young people from around 20 hi-tech firms across the region as well as from UKAEA.

It was an honour meeting The Duke of York, and his interest in science and technology is inspiring to young apprentices like me. Meeting people like The Duke reinforces the importance of industries like engineering in everyday life. He asked us about our apprenticeships – what we are doing, how we feel about it, and if it was the right decision over other options.

Fusion research at Culham is funded by the Engineering & Physical Sciences Research Council and by the European Union under the Euratom treaty.

Fusion research
Fusion research aims to copy the process which powers the Sun for a new large-scale source of energy here on Earth. When light atomic nuclei fuse together to form heavier ones, a large amount of energy is released. To do this, fuel is heated to form a plasma in which fusion reactions take place. A commercial power station will use the energy produced by fusion reactions to generate electricity.

Fusion has huge potential as a long-term energy source that is environmentally responsible (with no carbon emissions) and inherently safe, with abundant and widespread fuel resources (the raw materials are found in seawater and the Earth’s crust).

Researchers at Culham are developing a type of fusion reactor known as a ‘tokamak’ – a magnetic chamber in which plasma is heated and controlled. The research is focused on preparing for the international tokamak experiment ITER, now being built in southern France. ITER – due to start up in 2025 – is designed to show that fusion can work at the scale of a powerplant, and if successful should lead to electricity from fusion being on the grid by 2050.

Duke of York sees energy revolution in the making at Culham