Eleanor May: medical physicist in a vital role for the MOD 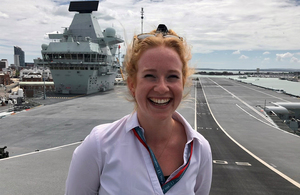 The trainee medical physicist and radiation protection support technician from the Radiation Sciences Group, whose family background is in the military, never realised she would be able to combine her science and service.

It’s been really exciting that I’ve been able to do that science role in defence because I sort of thought ‘well, if I’m going to be in defence I can’t be a physicist. You don’t have physicists for the Army!’

Eleanor’s role includes looking after the medical equipment that the military use such as X-ray, CT and fluoroscopy, as well as more general radiation protection for defence.

The small team covers the whole country looking after facilities which can range, for example, from small dental centres in a building in a remote barracks to large Navy, Army and Air Force sites.

The People Inside: Eleanor May

Eleanor’s first visit was to 34 Field Hospital on a validation exercise which means they set up as if deployed and run through scenarios with simulated casualties.

She was also involved in a visit to the Queen Elizabeth fleet flagship to test the kit and check documentation and procedures.

“Just to get to be on the ship, the ship is really cool,… and it’s really fun,” she said.

The Cambridge graduate has worked at the world-leading Defence, Science and Technology Laboratory (Dstl) for 18 months.

My role is quite unusual considering there’s only me and my mentor who do it. That’s pretty niche.

I think one of the most important attributes I bring to my job is enjoying building relationships with people as well as knowing the science behind what we’re doing.

What I most enjoy is getting to build relationships with the guys who are using the X-ray equipment or using the radioactive sources.

Being able to put people at ease and communicate the science, I think that’s the thing I most enjoy and is one of the most important bits about what we do.

Eleanor May: medical physicist in a vital role for the MOD

Business Delivery partner sought to inspire the next genera…
0
✖