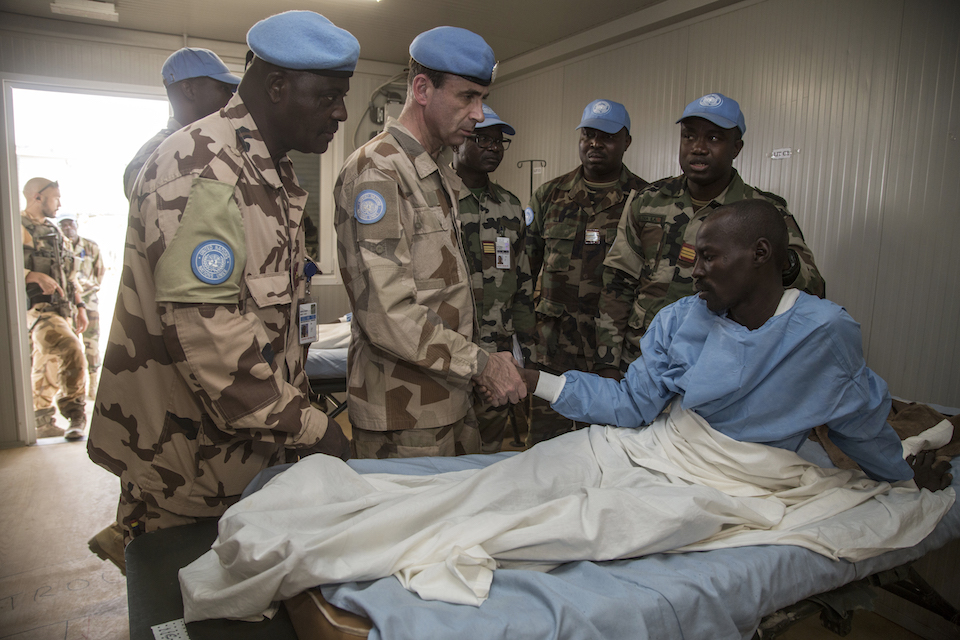 Mr President, thank you for convening this important event on an important anniversary. Thank you for being with us today and thank you, too, to his excellency, the German foreign minister for being here. It was very good to hear from our briefers, from the Under-Secretary-General, from Dr. Bellal and, of course, from President Maurer.

The ICRC is one of the oldest international organisations. They gave us a very good context for why we’re meeting today and why IHL remains so important. It provides a robust legal framework for the protection of all civilians and combatants and it is a vital tool in ensuring humanity remains even in the worst of conflict situations.

For the United Kingdom, support for international criminal justice and international humanitarian law is a fundamental element of our foreign policy. We hold an annual meeting with the British Red Cross to review compliance. The UK has a strong history of upholding and promoting international humanitarian law, and we consistently call on states and non-state actors engaged in armed conflict to respect IHL and to act in accordance with their obligations under it. The United Kingdom believes that justice and accountability for the most serious international crimes is not only right in itself, it is also crucial to building lasting peace and security.

Mr President, in March, we published our first voluntary report on the implementation of IHL at the domestic level. We invite other states to join us and publish the steps they are taking to improve compliance.

Mr President, the adoption this year of Security Council Resolutions 2462 and 2484 and their increased focus on the protection of impartial humanitarian activity in a counter-terrorism context helps to address an increasingly complex nexus around modern warfare. The 33rd Quadrennial International Conference of the Red Cross and Red Crescent on IHL will take place in December 2019. We are looking forward to participating and we will be hosting a session as part of the International Conference on the voluntary report I mentioned earlier to share our experience and hopefully get a corpus of best practice. And in November this year we will host the Preventing Sexual Violence in Conflict International conference, called “Time for Justice: Putting Survivors First.” The event will mark five years since the Global Summit to End Sexual Violence in Conflict. Our special representative on PSVI, Lord Ahmad, will lead the event, and we hope to pursue deliverables against three key objectives: securing justice and accountability, tackling stigma and preventing sexual violence in conflict.

As we all know, Mr President, and as you yourself enumerated, there are ongoing violations of international humanitarian law in multiple conflict zones. We need to work together using all the tools available as members of the Security Council to achieve this, as the Chinese representative said a moment ago. Working with states to implement training on IHL, call for greater accountability and information when attacks happen, and sharing expertise between governments are some of the things we can do.

Mr President, I’d like to use this debate to shine a spotlight on a few specific situations where the IHL situation is dire. In Ukraine, citizens in Crimea have been denied access to basic services because they would not change their citizenship, contrary to IHL. In South Sudan, it is clear that justice, truth and reconciliation are fundamental to rebuilding that society and all parties must ensure transitional justice under Chapter 5 of the revitalized peace deal is implemented in full.

In Mali and the Sahel, the deteriorating security situation has brought reports of violent international humanitarian law, violations and abuses by armed militia, terrorist armed groups and regional security forces.

But it is in Syria, Mr President, that the adherence by the parties to the conflict, to international humanitarian law, has reached a nadir. The Syrian people have faced forced starvation. They have been subject to arbitrary detention with no access by the ICRC. They have been driven from their homes in Aleppo and elsewhere. They have had weapons of mass destruction used against them in Aleppo and in Eastern Ghouta, as verified by independent bodies. And now, as those displaced from Aleppo join the terrified residents of Idlib, they find their schools and their hospitals being bombed. As we have said in this Council several times: this is in defiance of IHL and it defies humanity. It undermines any claim by the Syrian authorities to want to rebuild their country.

The United Nations Secretary-General has established a board of inquiry to examine these questions. And this is welcome. And I take the opportunity to recall that commanders on the ground have individual, personal responsibility to uphold international humanitarian law. They will be held individually and personally accountable for violations which may amount to crimes against humanity or war crimes. Justice may not come tomorrow, Mr President, but it will come.

As far as the United Kingdom’s contribution goes, we have given over 2.8 billion pounds, so over $3 billion dollars, in response to the Syria crisis, which is our largest ever response to a single humanitarian crisis. But with over 400,000 people who have died, over half a population displaced, with 6.2 million people fleeing their homes and over 5.6 million taking refuge in neighbouring countries and 11.7 million people in dire need of humanitarian assistance, it is clear, Mr President, that the end to this conflict cannot come too soon.

As President Maurer reminded us, there are increasingly complex aspects to warfare at the moment, especially concerning urban conflict. We have more non-state actors involved in conflict than before. Conflicts are lasting longer and they lead to complex and protracted crises. Of the 20 largest humanitarian aid countries, 17 have been receiving international support for eight consecutive years or more. The Council must continue, Mr President, to draw attention to these points. And in several non-international armed conflicts, actually, agencies of states are involved overtly or covertly. These are very complex areas and they require our further attention and study. Only collectively can we address the increasingly difficult and intertwined nature of modern conflict.

Finally, Mr President, it’s clear we need more action. As President Maurer said, the laws of conflict were designed to be inherent and pragmatic. They were designed not to be an aspiration difficult to attain, but to be followed so they could reduce suffering. We need to continue to spotlight violations by any and all actors. Only by doing so can we have a stake in upholding and strengthening our common humanity.