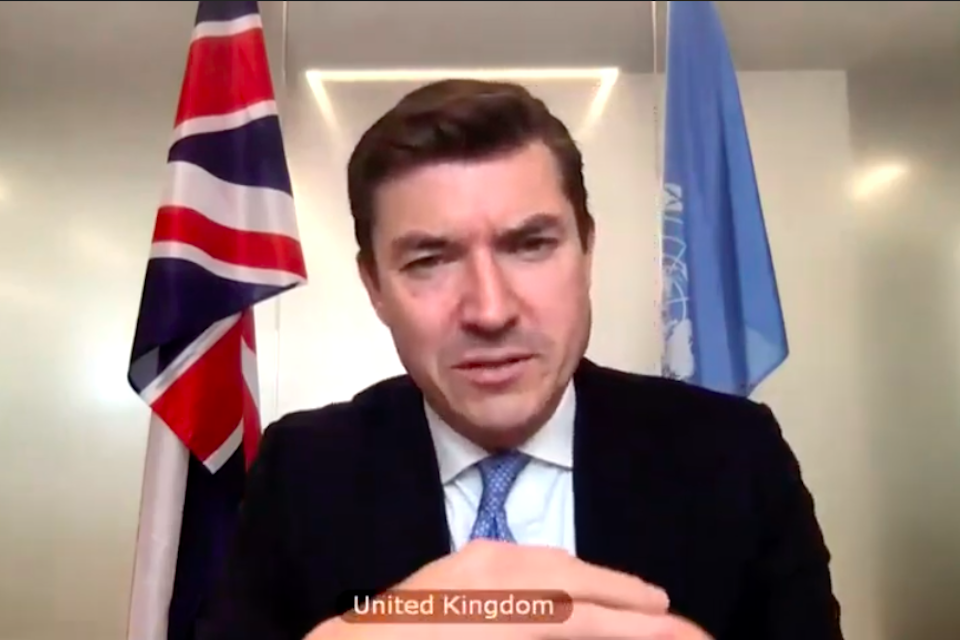 Thank you Ambassador Ladeb, for that comprehensive briefing on behalf of the three Committees, and to Ambassador Djani for his stewardship of the 1267 and 1540 Committees. As we all adapt to new working conditions, we greatly appreciate the efforts made to deliver on these critical mandates during this disrupted period.

Madam President, despite COVID, terrorists continue to inspire and perpetrate violence. In Syria, Iraq and beyond, Daesh continues to pose a threat, and recovery from their reign of terror remains a struggle for many.

The United Kingdom is committed to pursuing all available avenues in seeking justice and accountability for those who have fought alongside Daesh, whatever their nationality, through prosecution in the most appropriate jurisdiction. This is often in the region where the crimes took place. Any justice mechanism must respect human rights and the rule of law, as well as ensure fair trials and due process.

To strengthen accountability for terrorist crimes, we continue to work through the 1267 Committee to sanction individuals and groups associated with Daesh and Al-Qaida.

We also strongly support the work of UNITAD and in June, with Nadia Murad, we launched the draft Murad Code to ensure investigation into sexual violence crimes is safe, ethical and effective. There must be no impunity for the use of sexual violence and human trafficking to fund and support terrorism.

The United Kingdom condemns terrorism in all its forms and manifestations. We are very concerned about the increased violence perpetrated by right wing terrorists. While we may use different terms to describe the phenomenon, we join like-minded partners in recognising the need to prevent and address the threat.

Since 2016, we have proscribed several right wing terrorist groups, like National Action, Feuerkrieg Division and Sonnenkrieg Division. We are pleased to partner with the United States, Germany and Norway in hosting events bringing together policymakers, researchers and practitioners to increase understanding of the international dimensions of the threat, and emerging responses.

Prevention remains a cornerstone of our approach to counter terrorism. The UK’s Prevent programme seeks to tackle the causes of radicalisation and we have seen a marked increase – from 10 per cent to 24 per cent – in referrals relating to right-wing terrorism.

As more people – especially young people – are staying home and spending time on screens, terrorist groups have increased opportunities to radicalise and recruit online. The United Kingdom is working closely with tech companies, including through the Global Internet Forum to Counter Terrorism, and with international partners, law enforcement and industry to coordinate our efforts.

Madam Chair, this Council has frequently affirmed that all counterterrorism measures must comply with international human rights obligations. Promoting and protecting human rights, integrating a gender dimension and engaging with civil society partners are critical elements of credible, sustainable and effective counterterrorism.

The United Kingdom remains deeply concerned about the human rights violations being perpetrated against Uyghurs and other minorities in Xinjiang. Culture and religion are severely restricted, and we have seen credible reports of forced labour and forced birth control. Staggeringly, up to 1.8 million people have been detained without trial. China’s actions are disproportionate, indiscriminate and will be counter-productive from a counterterrorism perspective, as they will exacerbate ethnic tensions.

Madam Chair, fifteen years ago, this Council adopted resolution 1540 to address emerging WMD threats. These persist and, indeed, have evolved. We therefore thank the states who have shared information with this Committee, some for the first time. We look forward to working with partners through the forthcoming Comprehensive Review to ensure that the work of the Committee remains both relevant and practical to addressing these threats.

The UK wishes to take this opportunity to reaffirm its commitment to other key elements of the disarmament and non-proliferation architecture, which are also critical to maintaining international security, such as the work of the IAEA, OPCW and others.

With the prospect of a vaccine, our thoughts turn to the process of building back better. This should be reflected in our CT efforts, too. In both the Security Council and in the General Assembly, we will have several opportunities to consider the UN’s counterterrorism efforts and the achievements of states and what more needs to be done. In terrorism, we have an enemy that does not rest. We must ensure that the architecture we helped develop remains fit for purpose and that we hold ourselves to the very standards we set out in our resolutions.

International Affairs Ensuring an inclusive electoral process and a unit…
0
✖