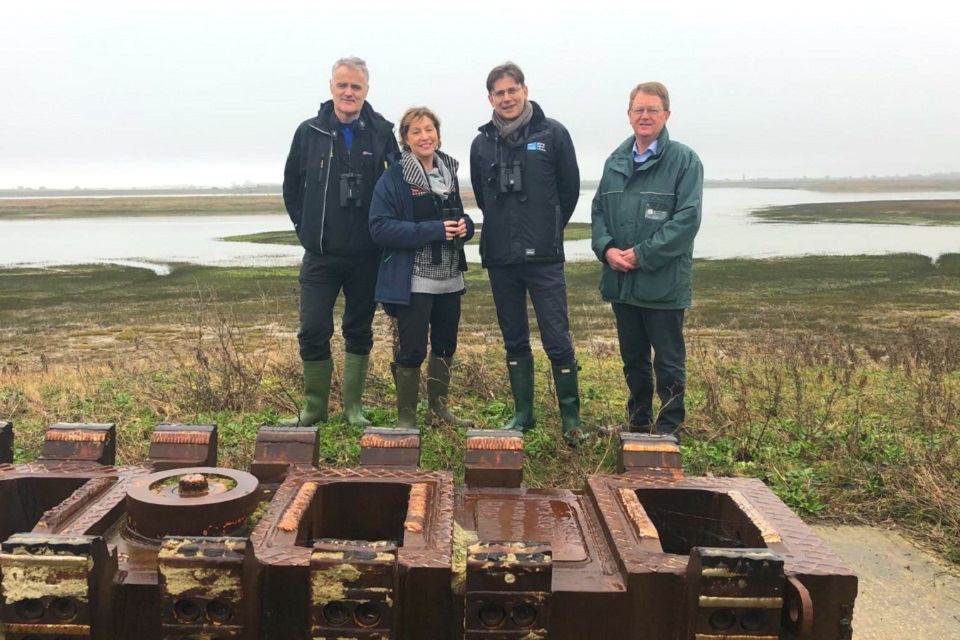 Environment Minister Rebecca Pow visited the Wallasea Nature Reserve today to see first-hand the extensive efforts to help the coast and its wildlife adapt in the face of climate change.

The Minister was touring the Essex site ahead of the introduction of the landmark Environment Bill in the near future, which will address the biggest environment priorities of our age – including restoring and enhancing nature.

The habitats – mudflats, saltmarsh, brackish marsh and saline lagoons – provide an increasingly popular home to a wide range of birds, including waders and migratory species such as brent geese and avocets, and other wildlife. The site also locks up two tonnes of carbon per hectare per year.

The Environment Minister also visited nearby Allfleet Marsh, part of the Wallasea site, to see the local Special Protection Area (SPA). The SPA was designated in 2018 as an extension to the Crouch and Roach Estuaries SPA. The area spans 119 hectares, and as well as supporting migratory species such as dark-bellied brent geese, is also permanent home for 20,000 waterbirds, including lapwing, shoveler and golden plover.

During the visit, the Minister met with RSPB representatives, including Martin Harper, RSPB’s Director of Conservation, to discuss the Government’s views on environmental protection and efforts taken to date by the charity to restore coastal environments. Joining the Minister and RSPB were Natural England Area Manager, Aidan Lonergan; and the Environment Agency Project Manager, Paul Miller.

This Government is committed to tackling the climate and nature emergency and leaving our precious environment in a better state than we inherited for future generations to enjoy.

Our commitments to the environment are ambitious and our forthcoming Environment Bill – the first in over 20 years – will drive a world-leading programme of reform to address the biggest environmental priorities of our age.

It was inspiring to see first-hand the remarkable success story at Wallasea – a world-leading example of coastal restoration – and to discuss with RSPB their ambitions not only for the Wild Coast Project, but for other coastal schemes and wider environmental protections for the UK’s nature into the future.

Wallasea Island is the largest coastal habitat creation of its kind in Europe. It’s an example of how we must adapt to rising sea levels by recreating an ancient wetland landscape of mudflats, saltmarsh, lagoons and pasture that store carbon, support wildlife and benefit the local communities.

It’s a beacon of hope, perfectly highlighting how we should respond to the ecological and climate emergency.

The visit comes as yet another step that follows the Government’s commitment to marine protection and follows a recent announcement of two new and extended SPAs in Solent and Teesmouth. It also follows the announcement of the upcoming Seabird Conservation Strategy and comes ahead of the introduction of the Environment Bill.