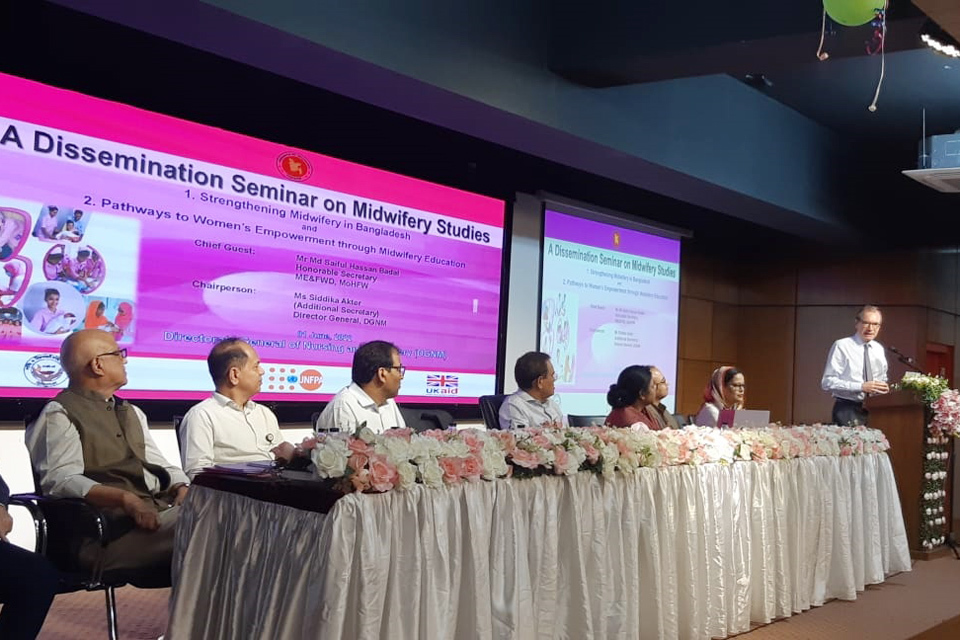 In association with the British High Commission in Bangladesh, the Directorate General of Nursing and Midwifery (DGNM) and the United Nations Population Fund (UNFPA) organised a dissemination seminar on Wednesday 1 June 2022, at the auditorium of DGNM in Dhaka, to share findings of two studies on midwifery in Bangladesh.

Those two independent studies focused on the lessons learnt while strengthening midwifery in Bangladesh, and pathways to women’s empowerment through midwifery education. The findings indicate that the UK Government’s support helped the Government of Bangladesh increase deployment and utilize the diploma holder midwives which greatly improved women’s access to safe childbirth, over the last three years. In 2021, the midwives, deployed in 403 Upazila Health Complexes (UzHCs), conducted 87 per cent of the total deliveries at those UzHCs. In 2018, the percentage was only 24.

The studies also found that the existing midwifery education in Bangladesh is effective and contributing to sharpen the social and counselling skills, and improve interpersonal communications of midwives while attending any service recipients. In contrast to the traditional birth attendants, the trained midwives are able to provide more institutional support to use technology-based tools for child delivery, which makes midwifery in Bangladesh more trustworthy to service recipients.

“The national midwifery programme has greatly contributed to the reduction of maternal and newborn deaths, as well as caesarean section rates in Bangladesh. The Ministry of Health and Family Welfare has initiated development of a cadre of international standard professional midwives. It was possible due to the strong commitment and support of our honorable Prime Minister. Government has opened the door to higher education for midwives. I believe that the midwives will play significant role in enabling us to achieve the SDGs by 2030.”

“The UK has been a close development partner to Bangladesh since independence. Our joint effort to strengthen midwifery in Bangladesh adds to the five-decade long Brit Bangla Bondhon for development.

“Today almost 3,000 midwives are working in the public health system and have helped deliver over 300,000 children over the last five years. Almost 500 midwives are serving in the Rohingya camps and others in the private sector, enabling safer childbirth for women and their babies across Bangladesh.”

During his speech, the British High Commissioner highlighted the importance of empowering young women through midwifery education, which helps women to realizing their potential and contribute to a healthy society. He reiterated the UK Government’s prioritization of women and girls in its new International Development Strategy.

“I thank the Government of Bangladesh and hope that the Government will consider those recommendations the UK supported studies have proposed to further strengthen midwifery in Bangladesh”, he added.

The Chair of the seminar, Ms Siddika Akter, the Director General of the Directorate General of Nursing and Midwifery (DGNM), the Ministry of Health and Family Welfare (MoHFW), said

“Midwives play a critical role in saving the lives of both mothers and newborns. Bangladesh’s National Midwifery Programme has successfully enabled thousands of mothers to give birth normally. Considering the need for their services across the country, more than 20,000 midwives need to be deployed to different health facilities including district and medical college hospitals in the near future. To continue these promising developments, the Government has created 5000 new midwifery posts.”

For one decade, UNFPA Bangladesh has been a committed implementing partner of the UK who is playing a significant role in advancing the midwifery in Bangladesh. Dr. Vibhavendra Raghuyamshi, the Chief of Health, UNFPA, stated, “It has been an immense pleasure for UNFPA to take part in conducting these studies, the findings of which are highly valuable. Professional midwives do not just play a critical role in preventing maternal and newborn deaths, but also providing family planning and gender-based violence response services to vulnerable women and girls. We look forward to continuing our partnership with the Government of Bangladesh, as well as our generous donors the United Kingdom, Sweden and Canada to ensure the life-saving services of midwives will become as widely in available Bangladesh as possible.”

The data strategy: a blueprint for the evolution of a trustworthy data system?