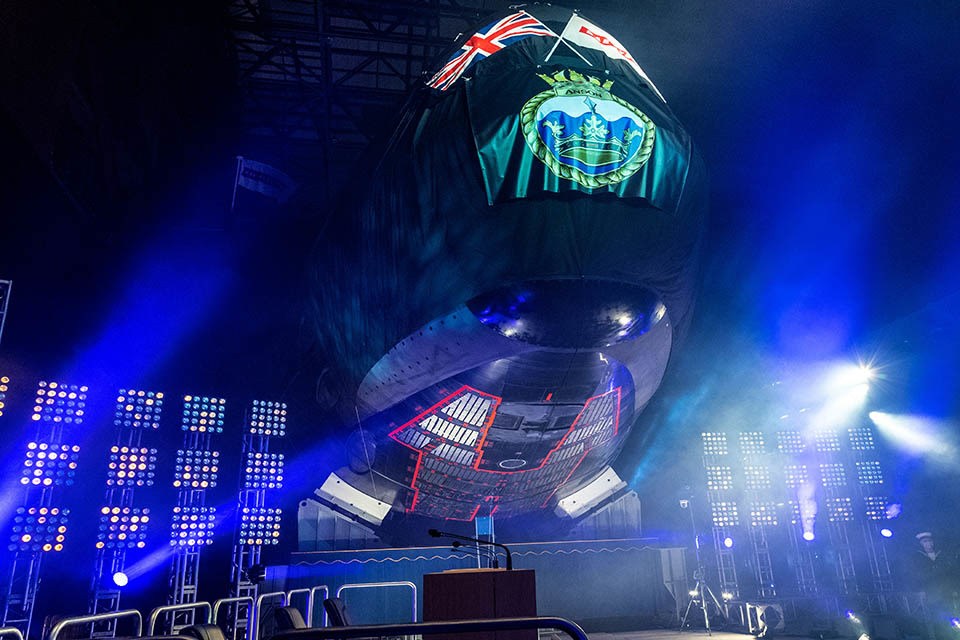 Astute Class submarines are the largest, most advanced and most powerful attack submarines ever operated by the Royal Navy, and Anson is the fifth to be officially named.

The last HMS Anson (1942-1951) was a King George V-class battleship, which saw active service in World War Two. All eight Anson vessels have been named after an Admiral of the Fleet, George Anson (1697-1762), who commanded at the first battle of Cape Finisterre and was First Lord of the Admiralty during the ‘7 Years War’.

Anson will play a vital role in defending the UK from deep-sea threats posed by adversaries around the world and provide a competitive edge for decades to come. The name Anson already exemplifies the long and rich history of our Royal Navy and now, thanks to Anson’s latest maritime technology, showcases excellence in UK shipbuilding.

In keeping with a tradition that goes back centuries, the Venerable Martyn Gough QHC, Chaplain of the Fleet and Archdeacon for the Royal Navy, blessed the boat via video message.

This is the first submarine to bear the name HMS Anson but the eighth naval vessel to carry the title which has a rich history spanning several hundred years.

I am certain she will carry on that heritage well into the future as she joins a world-beating, cutting-edge submarine fleet that is of strategic importance to the UK’s security and prosperity.

Advanced nuclear technology means the Astute Class submarines never need to be refuelled. The extremely capable boats can circumnavigate the world without surfacing and are limited only by the amount of food that can be stored and the endurance of the crew. The submarines manufacture their own oxygen and fresh water from the ocean.

Astute is the first class of Royal Navy submarines not to be fitted with optical periscopes. Instead, they use high-specification video technology with images delivered into the submarine control room via fibre-optic cables. BAE Systems Submarines is responsible for the design, build, testing and commissioning of the seven-strong Astute fleet. The Astute and Dreadnought programmes support 9,000 jobs at the shipyard in Barrow and thousands more across the UK supply chain.

Today marks an important milestone in Anson’s build programme and is the culmination of many years’ hard work. We have already delivered four highly-capable Astute-class submarines to the Royal Navy and Anson now takes another significant step towards joining her sister submarines.

Sister boats HMS Astute, HMS Ambush and HMS Artful are already in service, contributing to operations and supporting the Continuous at Sea Deterrent. HMS Audacious, the fourth of class, left Barrow earlier this year and is currently undergoing sea trials.

Boats six and seven – Agamemnon and Agincourt – are in construction at the Barrow shipyard.